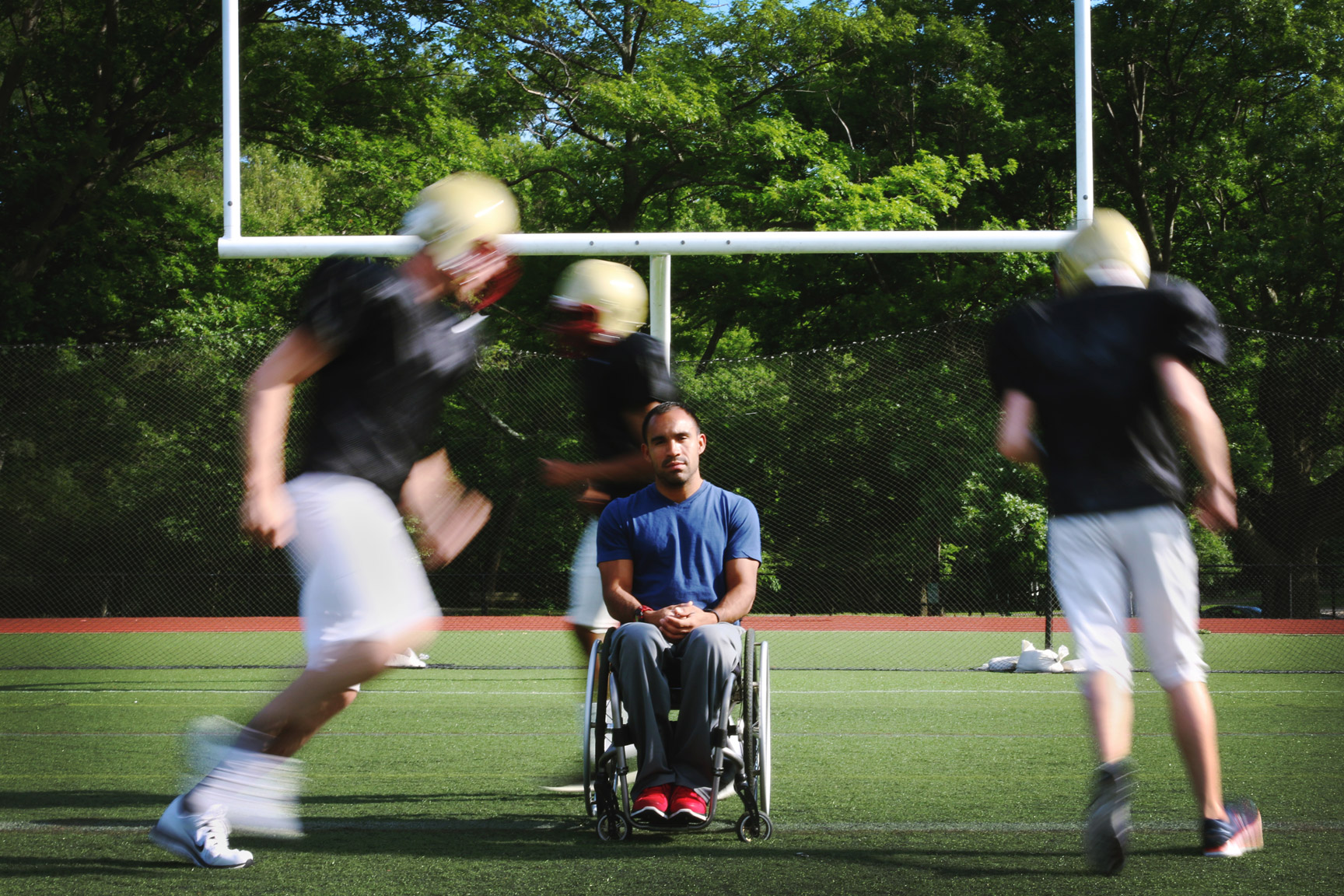 I hate to sound like a stereotypical foreigner, but when you are culturally bred to worship only baseball and fútbol, it’s difficult to see what Americans love so much about their own definition of “football,” their famously (or infamously) intoxicating game of equal parts grace and violence. Watching Company One’s production of Colossal, by Andrew Hinderaker, directed by Summer L. Williams, can help the most ignorant of spectators understand the sport that “everyone loves…even people who don’t know it yet.” But Colossal isn’t just about football; it’s about the beauty of human physicality in all its expressions. It’s about masculinity and intimacy, and the fraught waters that divide the two. In short, C1 took on a short but challenging work that, as Hinderaker describes it, leads us into the same electric and “animalistic place” a beautiful football match charges us into.

Mike (Alex Molina), an athletic prodigy who has hung up his father-bestowed dancing shoes to take up the brutal game of football, astounds stadiums full of fans, his coach (Damon Singletary), and his fellow teammates (played by Cameron Allen, Aaron Dowdy, Chris Pittman, Ben Salus, Henoch Spinola, Kai Tshikosi) as he excels at the irresistible game. One of his teammates, Marcus (Anthony Goss), proves almost as alluring to Mike as the game itself; the affection and attraction these virile young men feel for one another is all the more charged for being expressed kinesthetically rather than verbally.

But Mike’s adrenaline-pumped world shatters in an instant; one risky play in a game (enacted, “rewound,” and enacted for us again and again by the precise and impressive ensemble) ends Mike’s football career, his connection to Marcus, and the future as he always dreamed of it.

Post-injury, Mike (Marlon Shepard) finds himself shrinking away from the probing questions of his physical therapist Jerry (Greg Maraio), from the unwanted attentions of his concerned and newly un-estranged father Damon (Tommy Neblett), and from the taunting memory of his young vibrant self. The nonlinear story of Mike’s life plays out over four 15 minute quarters punctuated with a halftime performance involving a banging drumline (featuring Matthew Grina, Nick Liddie, and Seth Pumilia) and an exquisite dance performance (choreographed by Neblett). The game structure extends to the set (design by Kathryn Lieber): a traverse stage at the BCA was converted to a replica of a mini green football field. As the audience took their seats, burly young men men ran drills on the mini-field, with the clock counting down on the scoreboard.

One of the play’s challenges is that everything but the kitchen sink is thrown into it, thematically. We are dealing with crippling conceptions of masculinity, Mike’s unaired daddy issues, the topic of veiled homosexuality in a homophobic environment, the challenges and possibilities for an athlete facing life with a new disability, etc. While this multiplicity of experiences can make the piece feel a little ragged and inconclusive by the time the clock finishes counting down, that lack of tidiness seemed to be of a piece with real-life experience. All of us are facing a barrage of obstacles and insecurities, and there’s nothing for us to do but tackle them head on…or not.

Molina was marvelous to behold. As at home vaulting himself over barriers (be they people or wheelchairs), as he was jeté-ing over a brawling football player, he was all glorious brashness and boldness. Young Mike’s exultation at his physical form and prowess before the accident was attractive and exciting; the piteous cries he emitted as his crumpled figure lay inert on the field were no less compelling.

I commend Hinderaker for specifying in the script that the role of Mike must be played by an actor that uses a wheelchair. Rather than congratulating an actor for the “authenticity” he brings to playing a disabled young man, we can focus on other elements the actor brings to the role. Shepard’s rendition of present-day Mike was eloquent in his chosen pauses, the silent contemplative moments in which he mulls over past victories and dreads the emptiness of his future. His barely contained impatience and frustration at Damon and Jerry strike harder in their subtler manifestations.

Most of the performances benefitted from a calculated level of restraint. Goss and Molina were subtle in portraying the magnetized, dangerous attraction that draws Marcus and Mike to each other. Neblett and Maraio avoided simpering stereotypes of homosexuality in favor of playing masculine foils to Mike, convincingly conveying helplessness and compassion, respectively, towards him.

Despite the fast-pacing, I don’t know if this production always sustained the pressure cooker environment that Hinderaker maintains is essential to the play’s staging. The dance performance was impressive (particularly due to Allen and Spinola’s abilities), and when Mike and Damon moved together, the clear affection between father and son was reflected in their movements. The percussionists brought a lighter, energized touch to the story, but the length of their moments on stage began to make the halftime feel like padding filling out the halftime slot.

Per usual, the program comes in handy for a greater understanding of the show, with notes detailing the history of football and other nifty segments (the “Football For Dummies” section was particularly useful to me), excellently produced by dramaturg Ramona Ostrowski with Hayley Fluke.

Which brings me back to where I started. I walked away from Colossal with one strong impression: juxtaposing football and dance enhances the elegance found in football and the physical force found in dance. But it’s human performance that makes real theatre, and it is the equal possibility of tragedy or triumph that keeps us on the edge of our seats. Company One keeps this vital truth alive in each of their productions; it is the main reason I plan to stay in their stands.

Company One’s production of Colossal is playing now through August 15th, 2015 at Roberts Theatre, Calderwood Pavilion at the Boston Center for the Arts.