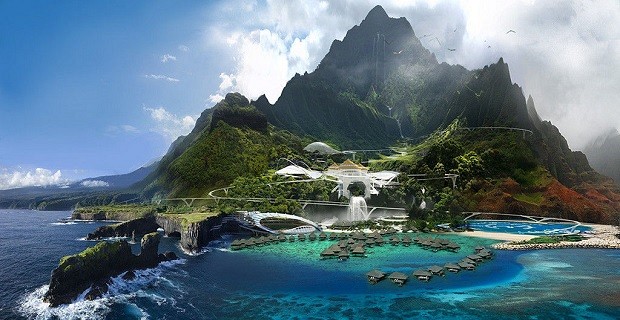 There’s always a lot of worry when it comes to revisiting a franchise. After a lot of years have gone by and the demand for more has died out, there’s the question as to why the studio would even bother. In previous months, the sequel Mad Max: Fury Road definitely proved that you can go home again by creating a film that not only brought new light to the franchise but will probably overshadow almost every release for 2015. The Jurassic Park franchise was out of the limelight for a much shorter span and is better fodder for a box office blowout than a post-apocalyptic sequel, but does it live up to its ancestors? Well…

Let’s start with the fact that Jurassic Park may be the everlasting granddaddy of action blockbusters. The film had an immediate impact and has remained a standard of grandiose blockbusters since its release. Plus, it is just one of those films that everyone seems to love. Despite the carnage within, the film appeals to parents and children alike. Although a handful of films, in terms of gross, top it, it is probably one of the few that will have a truly lasting legacy. Hell, its 3D re-release still managed to be one of the biggest releases of that summer. While James Cameron’s Titanic and Avatar top the board, they generally get a more mixed critical reaction then almost completely positive one that JP receives.

Unfortunately, this landmark product has not managed to even come close in quality follow-ups. Jurassic Park: The Lost World was a mediocre attempt that left quite a few people with a sour taste in the mouths. Jurassic Park 3 remains an ungodly, barely watchable monstrosity that, in any other case, should have been a franchise killer. Jurassic World regains some of that ground but doesn’t quite redeem the concept of this franchise’s sequels.

But, let’s admit it, the point of any follow up to this series, at this point, is to make money. While anything this series generates is guaranteed to produce cash, a mixture of timing, marketing and decent word of mouth managed to bring forth a horrifying money monster. What really matters for a movie like this is that, to not have terrible word of mouth kill it after opening weekend, it has to be alright. Recapping most of the general sentiment of the movie that I’ve heard, that seems to echo in my head, “it’s alright”.

One thing that definitely doesn’t impress me in the film is its turn against its original satirical nature. In the first movie, the film revolved around how John Hammond had created a miracle and had sort of cheapened it by monetizing it with a chintzy theme park. The additional theme of one can’t control nature is still present, sort of, but the park is not mocked in the way it was in the original picture.

In fact, the original film made note to make the dinosaurs the spectacle, its big gallant theme music playing for the first time when the audience got its first clear view of some dinosaurs. Compare that to when the theme comes in in the new film, a giant sweeping shot of the even tackier, Universal Studios-esque attraction, it becomes quite clear that the park itself has become the spectacle. While Park treated the rides with disappointment and mockery, World seems to trying to showcase all the “cool” possibilities of a dinosaur inspired park.

It never even really turns against that idea. The ruination of the park and antagonist of this film does not come in the form of chaos and nature overturning its controllers, but in the shape of misguided genetic enhancement.

The Indominus, a genetically produced hybrid of multiple dinosaurs, is our primary monster antagonist. Its makeup a mystery (because for some strange reason the park now works in a way where the owners are not privy to the classified work of the scientists hired there), Indominus is a grumpy bastard who seems like it might be too dangerous for the future audiences it is meant to attract.

Claire Dearing (Bryce Dallas Howard) brings Owen Grady (Chris Pratt) to inspect the creature’s pen because he’s now the leading authority in dinosaur control since he was able to tame the park’s four velociraptors. Meanwhile, her two nephews are visiting the park and experiencing the attractions while she is busy with this business.

The beast manages to trick the humans into letting it out of its cage and so starts the hunt as it begins its mindless murderous rampage. Now here’s where the feature really parts with its similarity to the original pictures and becomes far more similar to monster movies like Godzilla. While the earlier pictures revolved more around humans trying to survive the various creatures upon the island, this one is more about using various resources to take down the vicious hybrid dino.

I hate to compare this film to 3, since almost no movie deserves that, but like that film World feels the need to introduce a new creature to help create a plot. The movie seems to explain its own reasoning when Claire explains the creature’s creation was necessary to attract new audiences. Personally, I once again feel that the franchise’s need to introduce bigger and better creatures in lead roles has been misguided and unnecessary.

While I’ve been hammering on the plot arc of the film, overall it works fine in this movie, not great or ultimately memorable, but fine. Chris Pratt’s character uses his skills to hunt the Indominus and rejoin Claire with her nephews and he is fine in this role. Not exactly the hilarious and beloved character he was in Guardians, but he is fine. This movie also boasts one of the highest kill counts in any of the movies. Almost all the deaths are of faceless unnamed characters and none are particularly gruesome or emotional, but they are fine.

And there’s my biggest issue really is that the movie is fine, it’s an alright white noise of a film that doesn’t make much of a mark. The film increased the population of potential victims so it could kill to its hearts content without ever really threatening any main cast members. This becomes a real issue because, at its core, Jurassic World is still supposed to be a form of adventure horror and it never really inspires any form of horror or suspense. Much like the latest Avengers film, the threat is against a giant populace but, unfortunately, more fictional people in danger/dying never results in audiences caring more.

That’s not to say the movie never inspires any emotion. It manages to finally create a few cool moments that will really speak to fans of the original. In fact, the climax of this movie is predictable but is so perfectly staged that it almost reversed my opinion of the rest of the movie…almost.

So the creators of the feature succeeded in doing what may now be the least important part of making a cashcow of a blockbuster sequel and that is making it all right. Proper marketing and timing will turn a profit almost every time but making it just interesting enough to be passable will help guarantee serious influx for weeks following the opening weekend. I’ll give it a pass but at the same time that scares me because I feel like movies like Jurassic World pave the way for future bland Hollywood features. Once again, I’ll bring up Fury Road. That picture made its money, but studios, particularly in these evolving times, are gonna have to make a choice. On one hand they have a creative and original film, especially for a sequel, that manages to generate some of the best reviews of the year, which makes some money. On the other hand, a passable, formulaic and generic film, that cost almost the same amount of money, brought in an insane amount of cashflow. The decision seems obvious and negligible effect on quality blockbusters seems just as likely.