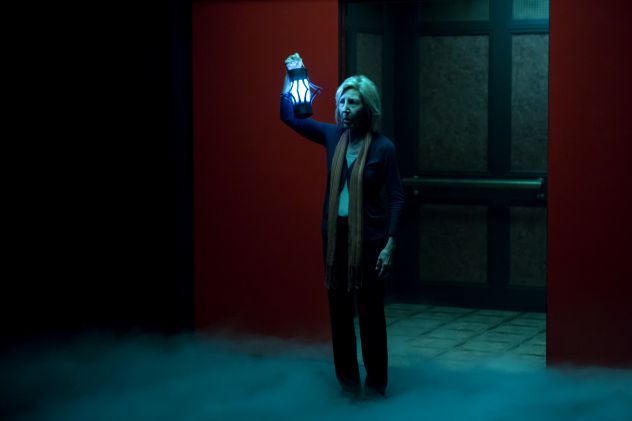 Insidious is a franchise that appears to be on the cusp of adding a creative twist to its earlier instalments. Insidious Chapter 3 plays it safe by both following formula while employing a few new ideas. To explain, I’m going to need to start by immediately spoiling the first two films.

The first Insidious film involves a boy who has fallen into a coma due to his soul being trapped in the world of the dead by a demon. Plagued by hauntings and wanting their son back, his parents hire a paranormal expert Elise Reiner (Lin Shaye) and her two goofy lackeys, Specs (Leigh Whannell) and Tucker (Angus Sampson). They successfully save the boy but not before his father Josh (Patrick Wilson) is possessed by an evil entity from his own past, which in turn murders Elise.

Following is Insidious Chapter 2, wherein Josh is still possessed by an evil spirit. Suspecting that something is wrong, his wife Renai (Rose Byrne) tries to discover the truth, and in turn, enlists the help of one of Elise’s old friends while teaming up again with Specs and Tucker. Returning to the dead world to fight the source of the spirit’s power, they also find Elise again and, with her help, destroy the evil spirit. The sequel ends by teasing the audience with a paranormal house call performed by Specs and Tucker with the ghostly presence of Elise in tow. The trio discovers a girl in trouble, plagued by what appears to be the demon from the first Insidious film.

Now that we’re all caught up, I can say how I was fairly excited I was for the follow up to Chapter 2. The first Insidious film was a fairly well-rounded horror film the was legitimately scary, had some fairly funny moments to even it out, while getting pretty ridiculous near its climax. Its sequel tied up the loose ends that the cliffhanger in the first film left dangling and gave us the backstory of the evil old woman spirit that plagued Josh. The second movie was, unfortunately, fairly ridiculous throughout and never reached any of the scary heights of the first film. Tonally, it was a step down, but narratively it was a half-decent follow up.

What the second film did do right was lay the groundwork for some interesting and different sequels. The second film slowly shifts the focus of the film from the beleaguered family to the paranormal investigators. Based on the conclusion of the second film, I was fully prepared to see a third installment that followed a ghostbusting duo and their dead boss taking down ghoulish baddies. Not only would it be a huge shift story-wise, but tonally, the franchise could take the shift from paranormal horror to ghostly action-comedy (based on the dynamic of the group). What happens, instead of following up the teaser at the end of 2, is that the franchise decides to dip its feet in prequel territory.

The third film opens a few years before the first Insidious film, with Quinn Brenner (Stefanie Scott) reaching out to Elise to help her contact her dead mother. Elise is remiss to do so since she has been out of the game since her husband died. Feeling sorry for the girl, she tries to help but is interrupted by a threatening spiritual presence. Once home, and despite Elise’s warnings against it, Quinn attempts to reach out to her mother on her own. What follows is that an unwelcome spirit, beckoned by Quinn’s calls, starts tormenting her.

This part of the film is much like the previous two. An evil spirit is tormenting one member of a loving family and they slowly convince their family that what is happening is really paranormal. In this case, it is the incapacitated Quinn (tricked by the ghost into being injured by an automobile) who must deal with the violent spirit, while trying to convince her busy working dad to help her.

Meanwhile, Elise is attempting to tackle her own demons and overcome the violent attacks of an apparition (the same one that possesses Josh in the future) that plagues her every time she visits the spirit world. When the Brenner family finally reaches out to her, she is unable to overcome this spirit and has to submit. This leads to the family attempting to get help from a couple of internet-based haunted house investigators (who of course turn out to be Specs and Tucker).

Herein is the whole payoff and purpose for the entire prequel. The film shifts its focus away from Quinn, as a tormented protagonist, and towards the ghost-fighters. This kind of begs the question as to why we spend so much time with Quinn in the first part of this movie when she remains a secondary damsel in distress for the remainder of the feature, but I digress. During this part of the film, we get to see the initial team-up of this trio and discover how they all fall into their respective roles. To be honest, with the rapidity that this all occurs and the little insight that it actually offers, I find the whole prequel kind of pointless. I think that the earlier sequels built a demand to see more of this trio in action, but an origin story is kind of a pointless add-on to the whole franchise.

Still, the film is not without its merit. The ghost, in this case, is not a possessor of bodies (like the first 2 movies) but a kidnapper of souls. This makes the whole second half of the film play out more like an action suspense film. Like other kidnapping thrillers, the victim needs a team of specialists to save them, but in this case the specialists need to be paranormal in nature because the kidnapper is a ghost. What I really enjoy about this is how it bridges the gap between ghost fighting and mundane (in terms of it not involving ghosts) crime fighting. Instead of being notions of horror, the ghosts in the franchise are now being brought down to the same level as pests and criminal malcontents, much in the same way that they were in films like Ghostbusters and The Frighteners.

What I do take issue with, and where the whole prequel makes itself even more tedious, is how long the movie takes to get to this point. In the first half of the film, the antagonist is still this ghostly unknown that spooks poor Quinn through AN EXTREME OVERUSE OF JUMP SCARES. I’ve made my feelings towards jump scares apparent in the past and, unlike the first two movies, this prequel tries to create a horror atmosphere in its opening through near-constant jump scares. This is extremely aggravating because it not only does it fail to create a lasting sense of dread or horror, but when used this often, it can be fucking taxing on the viewing experience. In a jump-scare-fest like this (at least if one is actively viewing and not completely emotionally disconnected), constantly tensing up for the upcoming jump and getting the little heart hiccup when it finally occurs actually makes the movie more annoying than scary. It’s like if you went on a drop tower ride at a theme park. Two or three drops is fine, but if instead it just kept raising you up and dropping you every few minutes for half an hour, all you would want is to get off the goddamn ride.

Besides that bitching, I’d also like to get even pickier by making an appeal to filmmakers to ask them to stop having people get hit by cars as a jump. The first time I can remember someone getting hit by surprise by a formerly off screen car was in Scary Movie. Since then, this car gag has been slipped not just into comedies (Mean Girls), but also into serious scenes (ie: The Forgotten, The Orphanage, Whiplash). I’ll admit the event was thematically tied to Whiplash, but in most other cases the gag is getting incredibly tired and is starting to seem just as comical as it did in Scary Movie.

In this film, the car accident makes less sense than any previous example I have ever seen. Quinn is standing in the middle of a less frequented road in behind a theatre. Not only that, but it is rather well lit. The car then friggen’ creams her before it slams to a halt shortly after. I mean, yeah, you should never stand in the middle of a road, but based on the speed the car was going, the type of street it was and the fact that it was in a downtown area would make the driver completely at fault for some real reckless driving. Not only that, but based on the hit, the father shouldn’t have to work as much as he does in the movie since he’d probably be able to win a real serious lawsuit out of the whole thing.

I know, I’ve spent three paragraphs complaining about how unbelievable a car crash is in a movie about ghosts and demons. But a movie takes time, effort and writing to suspend the viewer’s disbelief. The accident, in this case, is a plot device used to break Quinn’s legs and to make her a more defenseless victim when suspenseful and scary things start happening to her. The effects of the crash are beneficial to the film, but the hasty way that they wrote the crash hinders how seriously people can take any other scene in the movie. Not to mention that when something nearly fatally wounds your protagonist, it should not be more likely to elicit a giggle than a gasp.

Back on topic, Insidious Chapter 3 brings us another instalment that, besides its annoyances, effectively fits in with the lore of the franchise. It also reins in the pace of ridiculous paranormal plot-turns where the second film had started to push the envelope a bit too far for audiences to take seriously. It may have a rocky opening, but it really starts to deliver when it finally puts the paranormal investigators at the forefront of the action. I feel that if Insidious Chapter 3 had the confidence to put Quinn in dire straits sooner (shifting the focus to Elise and her lackeys from the outset) instead of sticking to a familiar formula to get in extra jump scares; this film may have even competed with the first for quality. It may not deliver what was promised at the end of Chapter 2 and it bothers the fans with answers to questions that nobody was really asking, but it does manage to keep me happy enough with the franchise to want to see more Insidious tales.

Once again, this prequel ends by teasing a rematch between Elise and the Darth Maul demon from the first film. Here’s hoping that the writers and creators of the series work out the kinks from this film and deliver a sequel that might bring the franchise into some truly new territory.