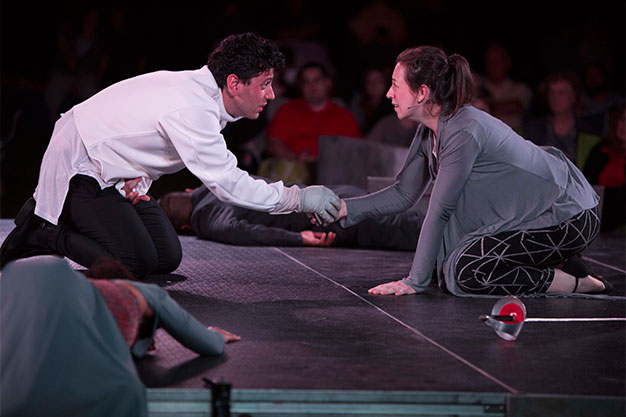 Driftwood Theatre Group’s Hamlet really works. The Bard’s Bus Tour production- which just finished a short run in Withrow Park before continuing on to 16 more locations over two and a half weeks- is the third Hamlet I’ve seen in six months but it’s only the second Hamlet I’ve found myself wholly invested in. Ever (the other was Rory Kinnear’s 2010 version at the UK’s National Theatre). It’s not a perfect production; it might even be overall the weakest of those three versions thus far in 2015, but how much I love or hate a Hamlet always comes down to Hamlet and the one thing Driftwood’s Hamlet gets absolutely right is Hamlet.

Paolo Santalucia is, like many of his Soulpepper comrades, an actor of dependable quality. Whether he has two lines in a big ensemble or is carrying a key role, he’s always pretty good- from Stoppard to Dickens to Bulgakov- but not with Shakespeare. With Shakespeare he’s exceptional. Helmed by artistic director D. Jeremy Smith, the production rollicks along and, while the pace trips up much of the cast, the verse pours out of Santalucia like it’s the most natural thing in the world. Very quickly, the classical technique fueling the performance is eclipsed by the rare opportunity to see past issues of execution to the larger choices of the performance. Not only does the incredible pace of Santalucia’s speech keep the play moving but it balances Hamlet’s physical inaction with a mind that moves a mile a minute, lunging wildly from emotion to emotion, scheme to scheme and finally making sense of some of the prince’s more questionable moves. His angst is rooted in a first scene played with crushing sadness rather than bratty ennui, his love for Ophelia (Natasha Mumba) is shadowed by a powerful connection with Sarah Finn’s female Horatio, his antic disposition is characterized by biting sarcasm. He’s a charming prince, a heady scholar (I was thrilled to see a Hamlet still  young enough to conceivably be a modern student) and an emotional hazard, the latter quality augmented in Toby Malone’s adaptation by scene rearrangement that sends Hamlet offstage infuriated only to return a few lines later merry as the day is long.

Those few emotional inconsistencies and the disorienting inconsequence of Polonius’ death are the only weak points of Malone’s bold new Hamlet Variorum, which blends elements from quarto and folio editions to trim the action to a swift two hours. Even non-purists will notice a few line changes (“infinite jest” and “there’s the rub” for starters) but the heart of the story stays in tact, elevated by Santalucia’s distinctly whine-free take on the bard’s whiniest hero.

Smith’s production is less perfect as an overall piece. An iffy ensemble (Steven Burley’s memorable Guildenstern and gravedigger are hits, Nehassaiu Degannes’ vixen Gertrude is not) and inconsistent tech (so much mic feedback!) pair up to wreak havoc on the atmospheric scene transitions and create comedy in the wrong places. Melanie McNeill’s costumes suggest a vague dystopian future but ultimately look like loungewear.

The production is no more than so-so and Malone’s potentially alienating, though refreshingly agile, new version of the text might need a bit more support to win over Hamlet’s devotees but, to me, a superb leading performance is all any version of this play really needs (though, in such a case, Hamlet’s absence in act four is sorely felt). It’s not perfect but Driftwood’s Hamlet ultimately succeeds and it does so entirely because Paolo Santalucia is one of the only truly great Hamlets I’ve ever seen.