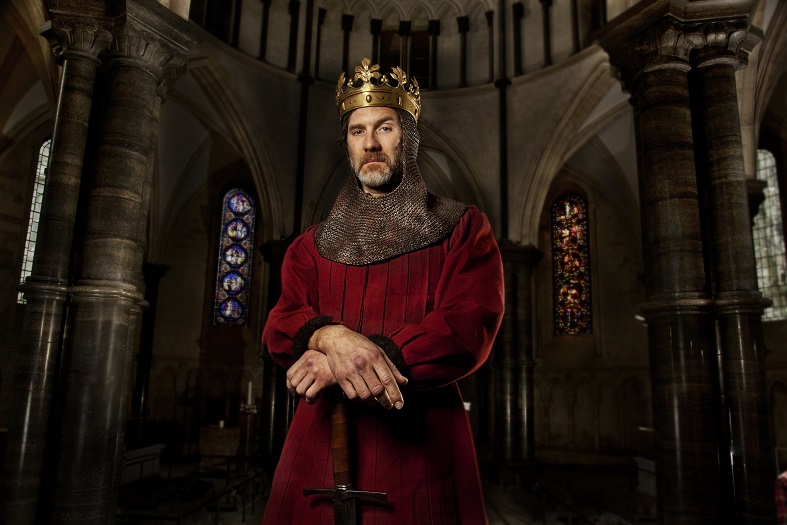 King John at The Globe

Mad world, mad kings, mad composition, mad play. King John, as a text, is a mess. The plot casually advances from war to marriage to war and then to death in a literary frenzy. The king is barely a character for most of it (Falconbridge seems to be given the most to say) and we barely know if John is a confident ruler or an effete head of state. The text is also not as thematically rich as Shakespeare’s other plays: there is more form than substance, hence why it was more popular in the Victorian era. Now it is generally considered one of the more obscure ones. There have been some recent revivals although these have sometimes taken a less pure approach to the play, which is reasonable given the lack of interpretive opportunity. This production by the Globe Theatre succeeds, however, astoundingly with thoughtful direction and an exquisite group of actors.

Jo Stone-Fewings triumphs as the swaggering John. There is no question of what kind of monarch he is: proud and supercilious. He wavers perfectly in his likeability. Most significantly Stone-Fewings uses an unexpectedly high register for the role yet it works: it works because if he were to have chosen a more heroic voice then he would have become too likable. His physicality is just enough to characterise and not fall into caricature; he is able exude supreme arrogance from merely a stance. Of course, like the play itself, John makes imprudent and bizarre decisions, but one would never know that based on his appearance.

Alex Waldmann deftly manages his role as the trenchant Falconbridge, who is the focus of much of the play. Throughout his asides and soliloquies Waldmann engages the audience at an intimate level while being unashamed of his (arguably evil) cunning. The rest of the cast are splendid also, with a wonderfully tense scene performed by the sympathetic Mark Meadows as Hubert and the younger but no less talented Laurence Belcher as Arthur. The one weakness in the cast would be in Tanya Moodie who is just shy of the audience’s pity as Lady Constance. It is combination of a generally underwritten character—almost all she has to do is lament over her lost son—and weaker acting which lets the piece down; since she has a fair amount to say it makes certain sections of play unengaging.

Director James Dacre and designer Jonathan Fensom must be given plenty of credit for turning the text into a satisfying production. There is a marvelous balance of the main stage, the thrust stage and the two stands in the pit. Viewing the play as a groundling, it is made all the more immersive by the unconscious turning back and forth one has to do to see the action. The sword choreography is tasteful too; it never tries too hard to be realistic while also not being ornamental. The thrust stage, as well as for the thrusting of the swords, is a brilliant location for play’s soliloquies, particularly Falconbridge’s as it really allows him to get intimate with the audience.

The music is the one part of the production that awakens the purist debate: I believe that the music is put into the production in order to cover up the flaws of the text. However, I do not believe that to be such a bad thing. As is the choreography, the music is tasteful. It imbues the production with atmosphere that the words alone can create. The strongest facet of the music is that which is made by obscure and arcane instruments: there are medieval strings and woodwind along with the accordion, the extreme register of the oboe coupled with, most notably, the sublime singing bowl with create a subconscious unease in the audience. The singing, which is employed liberally, works because of its un-musical modal nature. It does not venture into West End musical territory and helps the production’s ‘purity’, if one favours that aspect. The only time the music interferes with the lyricism of the words is in the oracle’s prophecy before the close of the first half, yet this happens sparsely.

King John is here until the 27th June. Buy a ticket in the pit because you will appreciate the staging far more. It is well worth the five pound price of admission.