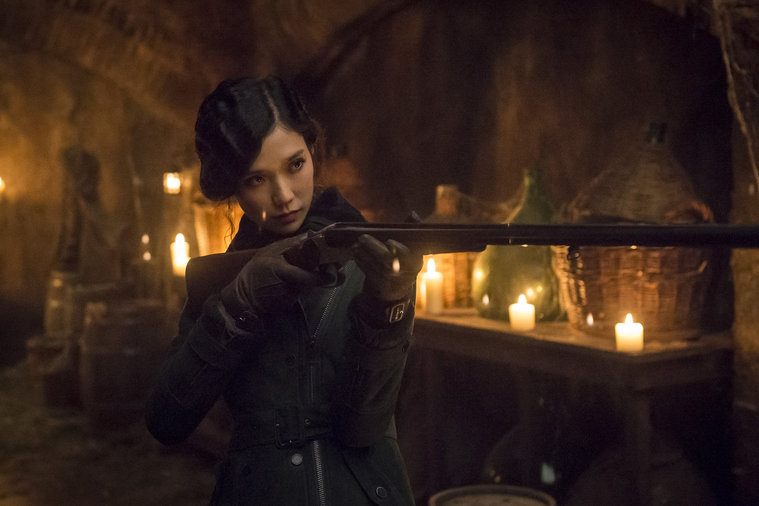 This week, Hannibal explored some of the titular character’s past. It gave few answers, but raised many more questions, in a typically fascinating and disturbing episode. (Some spoilers ahead).

In his search for Hannibal, Will decides to visit Hannibal’s past- the Lecter estate in Lithuania. Hannibal’s childhood home is just as grand, beautiful and creepy as you would expect it to be. The old, mostly deserted castle with its surrounding woods is like something out of a Grimm fairy tale. There’s even a mysterious woman holding a man prisoner in the castle dungeon.

The woman, Chiyoh, and her prisoner are both connected to Hannibal. The man’s crime? Eating Hannibal’s sister. It’s less clear how Chiyoh met Hannibal. All we know is she stopped Hannibal from killing the man out of revenge, and now has dedicated her life to guarding him. Why a young woman would watch such a monster for the rest of her foreseeable future instead of handing him into the police is unclear. It’s also unclear how long she’s been keeping watch. Tao Okamoto, the actress playing Chiyoh, is only 30, and we know Hannibal was murdering people in Florence 20 years ago in the show’s timeline, which he presumably started after he left home. It’s a little vague, and hopefully be explained a little more. Anyway, the point is, Chiyoh has been doing this for many years, until Will shows up and disturbs the routine.

Despite their time apart, despite what Hannibal did to Will, he continues to influence his behavior. Will lets Chiyoh’s prisoner go. The man attacks her, forcing her to kill him in self-defense. Will claims he wanted to free Chiyoh, but she retorts he wanted to see what she would do. It is exactly the kind of social experiment Hannibal would conduct. (The creepy corpse art Will makes is also Hannibalesque). Bafflingly, Chiyoh volunteers to go with Will to look for Hannibal, since there is nothing left for her in Lithuania. It’s not like Chiyoh’s only two options available are stay in the dilapidated estate or hunt for a cannibalistic serial killer with a man who nearly got her killed. She must have her own agenda.

Still, agenda or no, you have to wonder why the women on this show keep going down these paths. Abigail followed and obeyed Hannibal because she was a scared teenage girl, and as she said, she didn’t know what else to do. Chiyoh and Bedelia (we’ll get to her in a minute) are more in control of their destinies. From the limited information given about the women, a few similarities can be drawn. One, of course, is that they are connected to Hannibal. Their relationships might be ambiguous, but they’re there. And two, for all their careful, controlled exteriors, Bedelia and Chiyoh have proven they can be brutal when they need to protect themselves. They’re survivors. So why do they both decide to follow dangerous men instead of walking away? I have no idea, but I can’t wait to find out.

Bedelia claims to have a plan for herself when Hannibal inevitably gets caught. There is no doubt in my mind that as the hunt for Hannibal closes in, Bedelia would not hesitate to turn on him to save herself. And he would do the same. It makes me think of a darker, more mature, cannibal-y version of Taylor Swift’s Blank Space video, where it’s fabulous and great, but it’s inevitably going to go down in flames. Hannibal and Bedelia’s scenes together drip with opulence and murder, and it’s entertainment and artistic gold.

‘Secondo’ economized its artsy shots. It’s more effective than ‘Anitpasto’, where the artsy shots came at the expense of narrative. In this, they fit in the story but don’t overshadow it. It would have been easy to go overboard, with the diverse and gorgeous settings, from the Cappella Palatina to the gloomy Lecter estate. The amazing cinematography showcased these settings, but was never too much. There was also some truly brilliant edits in this episode. There was a sequence that transitioned from Chiyoh preparing a bird she hunted to Hannibal preparing a human he murdered that was so well done, I had to rewind it and watch it three times because it was so well executed and clever.

The only thing that didn’t really work were Hannibal and Bedelia’s extended conversations about forgiveness and betrayal. They reached the conclusion that Hannibal could only forgive Will for his betrayal if he ate Will. That is an annoying continuity error, because I distinctly remember in the Season 2 finale Hannibal tenderly whispering that he forgave Will as he stabbed him in the gut. Flip flopping is uncharacteristic of Hannibal, so maybe the writers are hoping the audience forgot. We didn’t, because it was so dramatic. (Of course it was. Hannibal is such a drama queen. He molded a corpse into a giant heart that he left for Will in one of their special places).

Their conversations were a vehicle for Bedelia to probe a little further into Hannibal’s past, which is great, I just wish it weren’t at the expense of continuity. We learned Chiyoh’s prisoner wasn’t the only one who ate some of Hannibal’s sister. Hannibal ate some of her too. There’s obviously some entire, horrifying twisted backstory there, which the show may or may not get into. (It’s my understanding that the books do). So far, the show is doing a good balancing act of exploring Hannibal’s past without ruining the air of mystery that comes with him. And at the same time, it doesn’t try to justify the evil he’s perpetrated. As he said himself, “Nothing happened to me. I happened”. Hannibal shows it understands that a character can have a tragic backstory but still be held accountable for their actions. That may seem like an obvious statement, but in some series, a tragic backstory is used to try and exonerate a character from any responsibility of their current actions. It’s nice to see Hannibal is avoiding that route.

Quote of the night:

“All sorrows can be borne if you put them in a story.” – Chiyoh