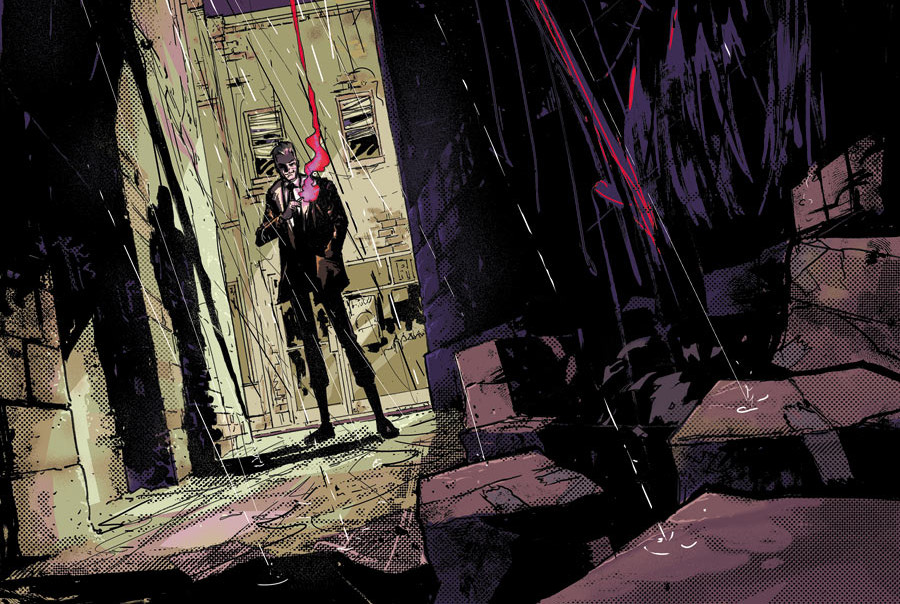 A Leap of Faith

At the risk of losing any comics-related credibility I may have established in your eyes to this point, gentle reader, I must admit that I was first won over by the character of John Constantine as he was portrayed by Keanu Reeves in the 2005 film simply titled Constantine. That’s where I was introduced to the character and his fascinating world of supernatural forces extrapolated from Judaeo-Christian sources and faithful (puns always intended) to the principles that govern them.

Reeves might not be everyone’s favourite actor and I understand it was off-putting for some fans that the actor playing John Constantine was neither blonde nor Liverpudlian, but I think his performances are consistently appropriate when he plays a character straddling two versions of reality – Little Buddha, The Matrix, and Constantine are my favourite examples. There’s something satisfying and underappreciated about consistency.

I’ll admit I can be as guilty as anyone else of getting caught up in stories to the point of overlooking details that contradict rules built into the world. Or, y’know, physics. But one of the areas where I find myself most distracted by errors is when a narrative involving elements of Catholicism misses its mark (or “sins”, to jauntily borrow the term back from the archer’s lexicon). And I’d lump in linguistic mischief like J. K. Rowling’s pseudo-Latin with that.

But I didn’t have that reaction to Keanu Reeves’s Constantine, so when the movie comes up in conversation, I’m an apologist. I’m curious about the now-cancelled TV show by the same name, but haven’t seen any of it. I am, however, pleased to report that this week I finally got to meet the character, who has existed for 30 years, on the pages of a comic book. So, while I can’t speak to what’s come before, I did have expectations and a desire to recognize elements that I like.

Constantine: The Hellblazer #1 kicks off a new series featuring this well-established fringe-dweller of DC comics. The issue does a splendid job of bringing a new reader on board without an origin story per se (I know it’s fashionable to dislike them, but I’m one of those people who has yet to become tired of a cleverly reprised radioactive spiderbite). In this single book, the writing team of Ming Doyle and James Tynion IV put on an absolute clinic in establishing and developing characters through interior monologues and dialogues alike. From the hook on the first page to the cliffhanger on the final one, I was buckled in. The pace was perfect and the banter is satisfyingly playful.

While I recognized Riley Rossmo’s art almost instantly, after reading and enjoying Rasputin, I was pleasantly surprised – and impressed – that that book’s colourist, Ivan Plascencia, is also part of the Constantine team. I wonder if it’s refreshing to paint with all the radiant colours of the infernal wind after spending a prolonged period of time in a subdued Siberian spectrum. In any event, the transition from one supernatural series to another seems to have gone off without a hitch. It all just feels right.

Last, but not least, the work of the letterer, Tom Napolitano, deserves mention. This is a wordy comic and, by flavouring all of the verbal elements of it just right, it became clearer to me how much of the title character and his world can be lost in translation to other media. Every medium has its own tricks, to be sure, but the combined expertise of this creative dream team is really making this new series sing right out of the gate. I wonder if fans of the TV show will take some comfort in it.

I don’t purchase, read, or recommend very many titles from DC, despite Superman being the first character whose storyline I followed with any regularity (back in my teenage years), but I’m thoroughly impressed with Constantine: The Hellblazer #1. It’s smart, sexy, and a sophisticated example of effective comic book storytelling. I’ll definitely be adding this series to my pull list. And probably rewatching the Keanu Reeves movie in the near future. Because Tilda Swinton. Seriously. Have you seen the movie?