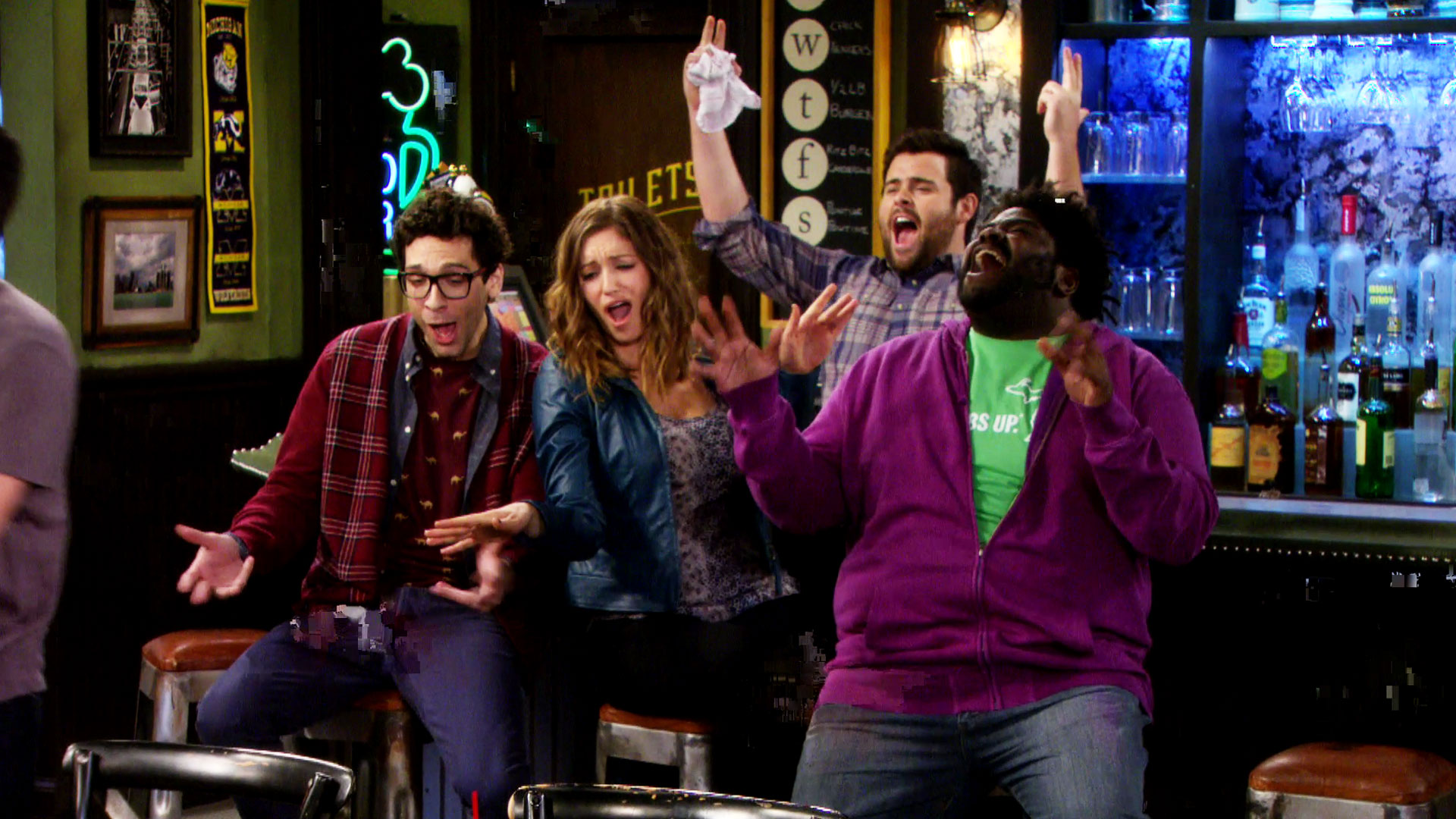 The totally goofy, very sitcom-y NBC spring sitcom Undateable is not the sort of show you really want to go to bat for when begging the networks not to cancel your favourite things (this year that’s The Mindy Project and About a Boy, both regular purveyors of honest to goodness human emotion) it is, nonetheless, something I would really like to see survive for a surprise third season (hey, the second was a surprise, why not a third?). From the charming-but-cheesy sitcom factory known as Bill Lawrence (Scrubs, Cougar Town, Spin City), Undateable is far more likeable  (and even sometimes clever) than its formula would suggest with a cast made up almost entirely of stand-up comedians whose combination of pre-existing friendships and improv chemistry elevates the show from somewhat painfully conventional to decently charming and self-aware.

Wacky bad boy Chris D’Elia isn’t really my style but he’s the perfect foil for Brent Morin’s adorably over-sincere (and just the right amount of annoying) Justin. The pair are a fresh take on the tired Odd Couple format, particularly winning when they’re backed up by the scene-stealing trio of David Flynn as sheepish newly out bartender Brett, the infectiously fun Ron Funches as Shelly and stealth hunk Rick Glassman as Burski, deftly hopscotching between tragically “undateable” sleaze-bag and endearing rom-com underdog (he’ll wear formidable leading lady Bianca Kajlich down eventually; I’m definitely rooting for him). Group-hang sitcoms usually boil down to one simple criterion for watchability: does hanging out with these people look like fun? And, yes, absolutely, hanging out with these people looks like So Much Fun.

It’s never looked like more fun than this week when, apparently just for the fun of it, Undateable went live. The cast and a huge host of guest stars (Minnie Driver! Dr. Drew! Zach Braff with an appletini!) performed the hour-long episode twice, once for each coast, and appeared to be having more fun than anyone should be paid that much money to have. The free-wheeling improv-friendly tone of the show was daringly not dropped when the editor went away and you can see the comedians’ minds working on the spot, one-upping each other (and the script) and trying not to corpse. Chris D’Elia fired off a doozy of an improv line during the East Coast feed (directed at Brent Morin whose reaction was priceless) only to have his joke co-opted by none other than guest star Ed Sheeran when it was time for the West Coast run (Sheeran, who performed a different song off his new album at the top of each show and helped close out the second with his rendition of “Hit Me Baby One More Time”, was totally game, really going for it the second time through, even grabbing Morin for an impromptu kiss in the final act). The West Coast run was messier with a lot more dropped cues (Sheeran’s co-opting of the opening scene seemed to throw the cast off their game a bit) and the camera missing a lot of key reaction shots but in the East Coast feed things ran so smoothly it took me a few moments to realize we were live.

Sheeran’s East Coast opener “Thinking Out Loud” was a highlight, of course (with fun reaction shots from the cast during the “open mic” performance), as was Glassman’s impressive cameo on the keys and the live score performed on-camera by series composer Waz. My favourite joke came unexpectedly from a douchey throwaway character named Trent who captured a world of things I hate by talking about wanting to have sex because it’s “#cardioday” (he actually said “hashtag”). My favourite non-joke moment came when Trent’s ex Candace (series regular Bridgit Mendler) realized she’s starting to fall for Justin after she helps him with his flirting (Morin and Mendler nailed the careful chemistry of that moment really well in both runs, which is promising for stories to come). And, of course, the best cameo was Scott Foley not because he did a good job (he messed up plenty of lines and is clearly not nearly as comfortable live as the guys with stand-up backgrounds) but just because he’s Scott Foley, I’ve loved him forever, and he is indeed “a genetic masterpiece” (he looks better at 42 than he did at 26, how is that possible?!); also because when he finds himself with extra time to fill he just starts screwing with D’Elia, because Scott Foley is fun like that. I wish they’d kept the cheesy original song for the West Coast broadcast, though; it was adorable in its stupidity and “Hit Me Baby One More Time” didn’t really have a point (though it did have Ed Sheeran and who doesn’t love Ed Sheeran?).