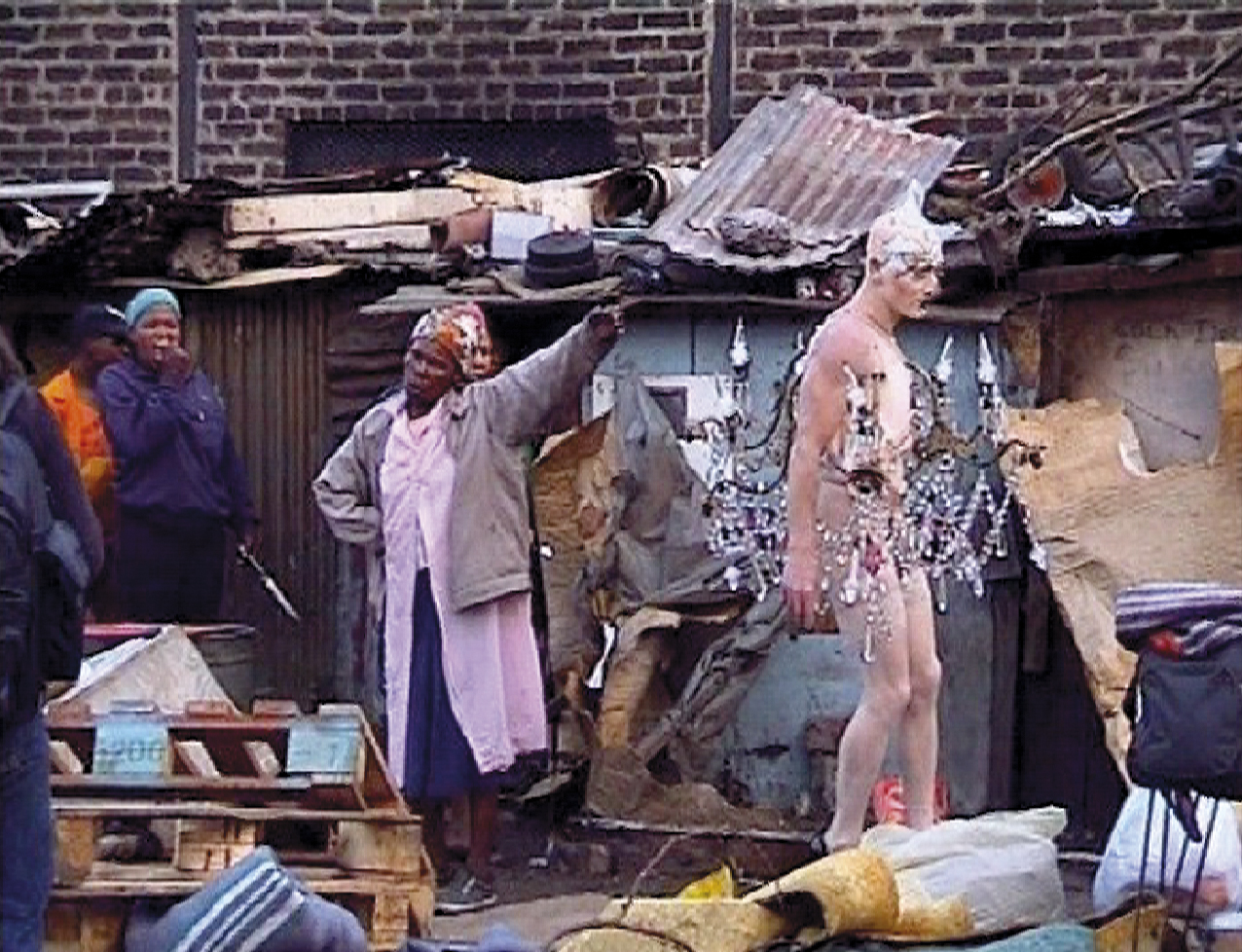 With a disarming amount of charm, South African performance artist Steven Cohen brought his infamous Chandelier to the final week of the Canadian Stage Spotlight on South Africa festival. We hear him before we see him, the sound of glass pieces jingling together fills the theatre moments before he enters slowly and deliberating from the side of the stage. His mic’d costume, a full body chandelier hanging off of him, is accented by the Star of David painted on the back of his head and complimented by his bedazzled cod piece. He seems fragile, frail, a bit unstable in his movements, but surely this is an effect of the exaggeratedly large black high heels he is wearing and a well practiced affected style of movement.

Like his first appearance, the sound of gears working is heard before we see the rigging slowly being lowered to stage level. After walking around, posing, and charming the audience, Cohen loops his wrists through what look to be thick leather straps, and while hanging from his hands and wrists he is raised back up to the theatre ceiling. The theatre lights go to dark and his chandelier lights turn on and there he is suspended and glittering high above us. His cheeky sense of humour is apparent even while dangling there, and no doubt we all get some amount of masochistic pleasure out of watching him hang.

My companion pointed out to me after the show that Cohen’s wrists were raw, no doubt the result of his nightly performances. We happened to be there on the last night of the festival which coincided with the Intermission I Vol. 5: Trans/Formation closing party. In fact we had left behind a boewors braai and DJ’d dance party in the lobby to come sit in the theatre for Cohen’s performance.

In the final scene of his live act Cohen moves through the audience, teetering in the dark up the stairs on both sides of the raised seating. First he reaches out for the support of peoples hands and arms, but then they start reaching out for him.

The second act of the night is a viewing of the film Chandelier, subtitled To Bring To Light. The film is a documentation of Cohen’s first performance of Chandelier in 2001, taking place in a squatter camp in Newtown, Johannesburg. Cohen, dressed in his chandelier costume, walks among the inhabitants and their belongings as their are dismantled and destroyed by city employees. We watch as Cohen interacts with the squatters, some reacting with amusement and others with aggression, sometimes sexualized and sometimes defended, all with the destruction of their homes as the backdrop.

It was not until the credits rolled at the end of the film that the poignancy of the images truly set in. As the last line of acknowledgements appeared on the screen: “Special thanks to the Homeless of Newtown, Johannesburg”, a ripple of strong emotion swept through the audience. People stayed in their seats to debate the merits of the work and the feeling was one of collective discomfort. While some audience members expressed outrage—was he being “pompous”? was he being “exploitive”? Others countered, “but what could have he done?” A sentiment Cohen has expressed in interviews in the past, that he is “an artist not a social worker”. Whether one agrees with the work or not, it still stands that Cohen “brought to light” an event that surely many in this audience would have otherwise been ignorant of.

Eventually we all filter back out to the DJ’d party in the lobby.