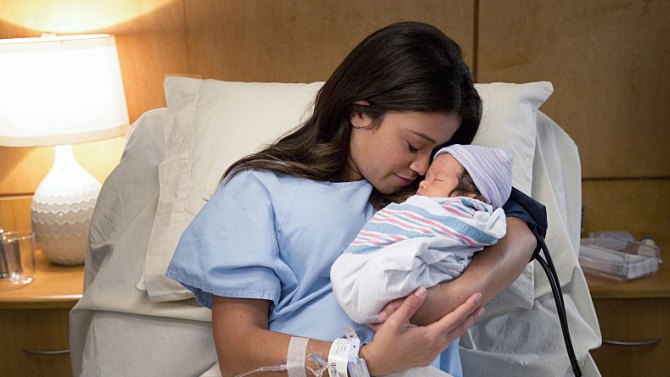 Jane the Virgin wrapped up its freshman season this week with a one, two, three… actually, I’ve lost count of how many twists ended up in “Chapter Twenty-Two.” Despite its less-than-strategic title, this show is one of the greats, with the finale making me cry, laugh, and say “Noooooo” aloud more than once. So, like the narrator says, let’s begin…

Xiomara and Rogelio spent the episode in Las Vegas, where they were getting reading to perform their show. Xo wasn’t thrilled about going since Jane was only three weeks from her due date and Villanueva girls tend to join the world with little notice. Alas, they both went, only to be told the next day that Jane was in labour. Before they could fly home though, they spent the night with some of Rogelio’s fans from Venezuela and (twist # 1) ended up pulling a Ross and Rachel, a.k.a they got drunk married in Vegas! Classic Xo and Ro.

Back home, Jane spent the episode first having a contraction scare (dang Braxton Hicks!), then getting told by both gentleman callers that they still loved her and want to be with her, only to go into real labour on the bus. Luckily, the bus patrons were lovely people and told the driver to take our pregnant heroine straight to the hospital. Fortunately for Xo and Ro, Jane’s labour took a little longer than Xo’s did, and Jane and Rogelio were blessed with (twist # 2) a beautiful baby boy the next morning (classic men, never arriving when they’re supposed to). Matteo Gloriano Rogelio Solano Villanueva, named after Jane’s maternal grandfather, herself, her father, and Rafael. Rafael super lost on that one, what with getting his last name as a middle name and all four other names being somehow related to Jane. Plus, three middle names? C’mon, keep it simple, friends!

Rafael spent the episode trying to use Petra’s love for him to his advantage. He wants to buy her out of the hotel, so he asked her out on a date, only to cancel when Jane went into labour. During the episode Rafael reminded us that this baby would be his only one since it was his only “sample” (if you’re looking for a word worse than moist, I found it). But, while he was away from the hotel, Petra, still being a Solano by name, answered a phone call about her “husband’s sample” (shudder) only to find out (twist # 3) the clinic made a mistake and Rafael’s you-know-what was split into two, meaning more that word I hate. But oh no! Now Petra has it (gross Petra, leave people’s samples alone!) and has a devious plan to use it…probably, that’s a season 2 twist.

Finally, Michael spent the episode with Nadine locked up in his apartment. She gave him information on the whereabouts of the doctor that changes criminals’ faces for Sin Rostro (a.ka. Rose, a.k.a. Rafael’s step-mother who also murdered his father). Turns out the bad doc is dead, and in the heat of finding out Jane is in labour, Michael accidently leaves the keys to Nadine’s handcuffs on the table nearest her. But (twist # 4) it wasn’t an accident! Sneaky Michael left the keys on purpose so he could track Nadine’s phone right back to Sin Rostro. We hope that works out for him because (twist # 5) Jane’s baby was kidnapped by a “nurse” who handed Matteo over to Sin Rostro! GUYS THIS IS TOO MUCH! The only good thing about this is Rogelio will inevitably make the kidnapping all about him. And any excuse to listen to Jaime Camil use Rogelio in the third person is worth all the kidnapped babies. Okay, maybe that’s a little much, but #Rogelifans.

If this all seems a little dramatic to you, it’s because it definitely is. The show is incredibly wild, yet down to earth, and everyone is enjoyable to watch. Gina Rodriguez is wonderful as Jane, and she makes you feel everything she’s feeling (and she has a Golden Globe to boot!) Plus, occasionally Justin Baldoni takes off his shirt, and its okay if you black out for a few minutes because the narrator will be there to catch you up. If you’re looking for a show to binge watch the summer while you pretend to read Game of Thrones or work on your beach bod, than this is it. Your excuse can just be that winter is coming.