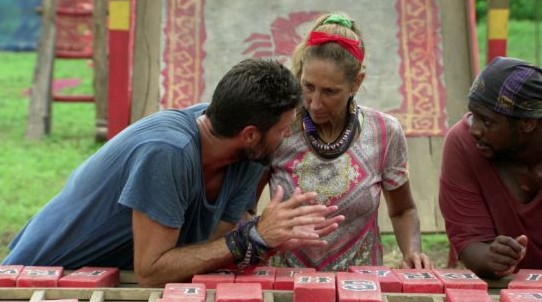 Mike vs. Carolyn: Who Will Win?

Before Worlds Apart premiered, Jeff Probst was confident that fans would love this season after a somewhat dull cast of San Juan del Sur (minus the very deserving winner at the end). I’ve got to say, I didn’t believe him for a good portion of this season. Just like last fall, this season saw all of the heavy strategists and shoe-in’s to win leave fairly early (Joe, Tyler, even arguably Kelly). As we get closer to the end, we’re finally seeing some strategic moves and have a few people to route for but overall, I’d say Probst missed the mark on his predictions.

But let’s not talk too much about what could have been, because ultimately we’re getting a pretty sweet end to an otherwise mediocre season. I think my real interest started to pique when Mike’s alliance turned on him and he became the underdog. After the no-collar alliance was given the boot, Mike and Shirin were left to fend for themselves and Mike’s move at tribal counsel to bluff that he was playing the idol for Shirin, was ultimately the downfall of the opposing alliance. Mike was smart enough to do exactly what he needed to do, which is let Shirin leave but at least create fear. That fear caused Will and Tyler to switch votes and target Dan, which in turn had to play even a little role in Dan’s decision to target Tyler in subsequent days. I can’t blame Tyler for switching his vote. Tyler was stuck between a rock and a hard place. It was him leaving or it was Shirin and if Mike wasn’t bluffing, he would have been done for. I’m still not sure why Will changed his vote, but I’m still not even sure Will understands what Survivor is.

The snuffing of Shirin’s torch was a difficult one to watch. It’s so seldom that we really see someone look HAPPY when their fire is extinguished but Shirin is such a fan on this game that she loved, and continues to love, every single moment of it. For personality alone, she was public enemy number one but as a game player I wish she had a chance to stick around. Shirin would be a serious threat if she’s given the chance to play again.

After Shirin’s departure, this week’s episode had yet another exciting tribal council. The boys in the lame alliance (Will, Dan, and Rodney) decided to target Carolyn after Mike easily won immunity again. This left Sierra with the decision to stick with her alliance or consider voting out Dan. Meanwhile, Carolyn was convinced Dan should be next since he has the freaking advantage (won earlier in an auction which allows him 1 extra vote at tribal). Unfortunately, it seemed like Carolyn and Sierra were not on the same page as Sierra debated. Even when Mike brilliantly pointed out that Dan and Rodney were too comfortable (napping on voting day), Sierra and Carolyn continued to tell each other they thought Mike was crazy…clearly these two do not trust one another. Flash forward to tribal, and Dan plays his advantage to secure an additional vote for Carolyn. Lucky for her, she knows what the advantage is and wisely pulls out her hidden idol thereby saving herself and ending the game of the most pompous player, Dan. I’m fairly certain I sat at home with my glass of wine and clapped for a few minutes

So who should win this game? The obvious answer is Mike. Everyone loves a good underdog story and Mike’s reminds of Kelly’s all the way back in season 1. In both cases, we have a fairly tight alliance of pretty despicable people you would never route for from a moral perspective and seem to have the numbers to win this thing. I’ll liken Rodney to Sue because the two are hot tempered, blue collar, and ultimately just awful people who likely get off on being in the villain role. I’ll then liken Dan to Richard, not because Dan would ever deserve $1 million but because they both were kind of douchebags. Lastly, I’d make the argument that Will is the Rudy…he’s just kind of there and nobody cares. Meanwhile, Mike (our Kelly Wigglesworth this year!) is public enemy number one. He’s ousted from his own alliance yet continues to dominate competitions. In fact, the only reason he’s still in this game is because he has won every single immunity (save for one where he used his hidden idol to stay in it). I do question Mike’s actual ability to outwit. His one big move was the genius attempt to create a crack in the alliance of 6 by pretending he’d give that idol to Shirin. The only other times he’s shown good strategy was when trying to convince Carolyn and Sierra to vote out Dan. His observational skills are pretty keen since he spoke with Dan and realized that Dan was targeting Carolyn with the other boys. That being said, I think it’s more a testament to how awful Dan played that game then it is how good Mike is playing. Due to that argument, I would be equally satisfied (and maybe even prefer) a Carolyn victory. She not only stuck with a good alliance throughout the post merge episodes, but was willing to play both sides in order to make it further. She voted out her number one ally because he was a physical threat and because he was the only person who knew she had an idol. Tyler would have probably won this game had it not been for Carolyn’s decision to keep Dan one more week. I’ve liked her since day one and I continue to think she’s got a great head on her shoulder. Mama C deserves a win but she’s also the only other competition threat left in the game. My prediction is that Mike continues to win and Carolyn is voted out next simply because Sierra, Rodney, and Will would be nuts not to evict Carolyn or Mike next. Sadly, the way I see it, Mike/Carolyn each have an uphill battle. Whoever wins immunity and can continue to win until the finals, will be the sole Survivor. If they each lose, they each leave. At that point, I might have to route for Sierra only because she seems like a nice human being. She’s done nothing, but if a Rodney or Will victory happens, this will go down as one of the worst finales in the history of Survivor.