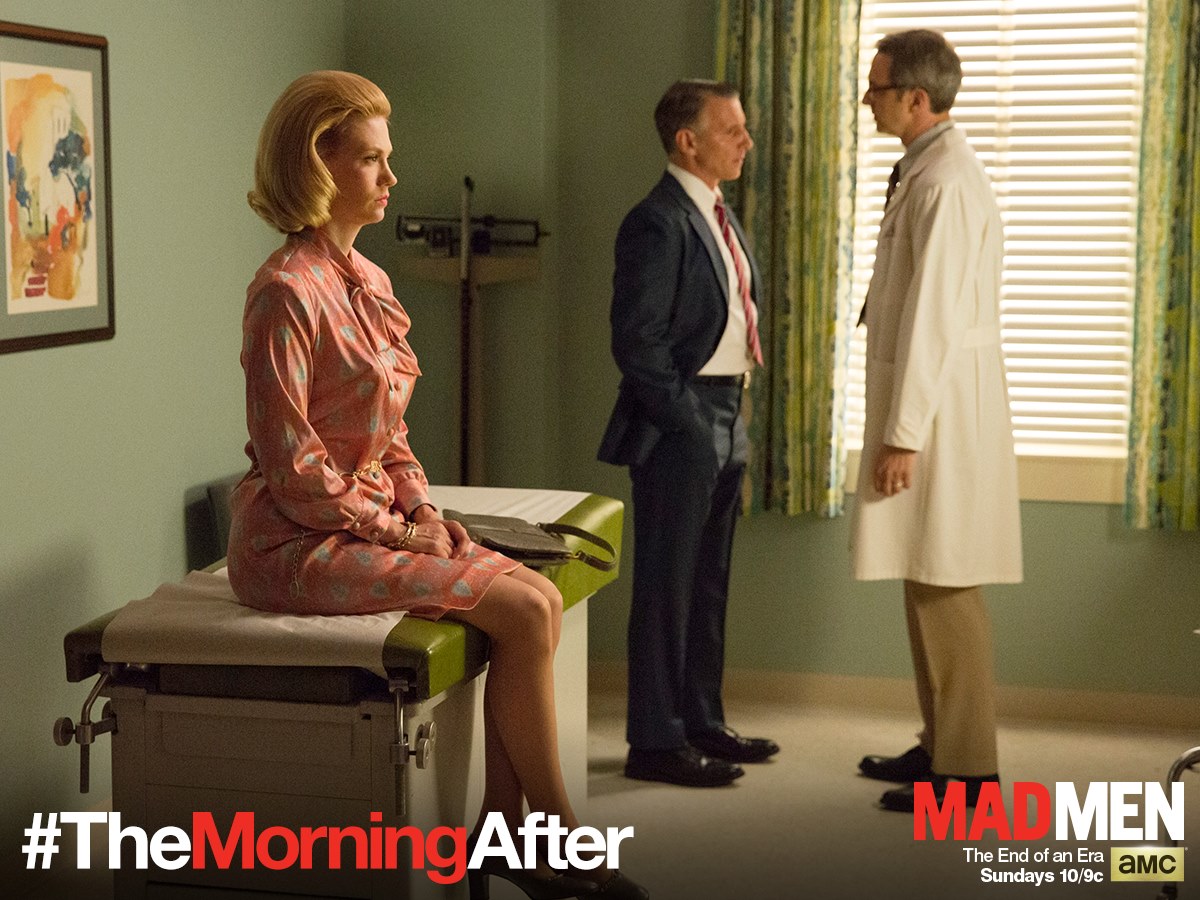 As the second to last episode of Mad Men began it was hard to ignore the title card that appeared on my Tivo. The Milk and Honey Route. This week’s episode was written by Carly Wray and Matt Weiner and directed by Weiner. As the title suggests it was all about finding the Promised Land. Unfortunately for some of the characters that seemed to come in not in life but in death.

We’ll start with the biggest bomb to drop since Lane Pryce was found hanging behind his door. Betty has lung cancer.

Makes you want to grab a rifle and shoot at the neighborhood birds, don’t it?

After wheezing up the stairs on her first day of class and then passing out as well as breaking a rib…Betty wound up in the hospital being delivered some awful news. She has aggressive cancer, in her lungs and lymph nodes. She’s given nine months to a year. Her only respite? The young men in her class who brought her to the hospital called her Mrs. Robinson. Betty’s still got it. But not for long.

As hard as this was for the audience to take you could feel an even bigger hammer drop within the Francis family. Henry has always loved to be in control but this was really the first time we’ve seen how much he loves his wife. Too bad Betty had decided she was going to get control of her own life and for the first time ever, she was going to use her final days not on chemotherapy or treatments. She’s going to go to class, be a mother, and let the world slip past.

Henry hates this idea and recruits Sally to come home to convince her mother. He can barely get the words out before breaking down. Sally comforts Henry. We see her transition instantly into an adult – echoed later when she takes her brothers into her lap. Now the woman of the house.

When she returns home with Henry she’s rebuffed by her mother. Betty doesn’t want your pity. She’s okay with knowing how it all ends.

Betty gives her daughter a note to be read minutes after she’s passed. Of course Sally opens it right away. I wish I could type out the entirety of the beautiful and succinct letter but all you need to know is that it ends with an “I love you.”

The torch has been passed. A few scenes ago Sally was talking to Don on the phone, being a typical teen. Her life will never be the same.

Wipe your tears. Let’s talk about something happier. Pete Campbell. Yes, you read that correctly. Pete Campbell is chasing his happy ending. And he’s winning.

The return of Duck, Don’s former replacement and current headhunter for corporate gigs, extends Pete an offer. Pete owes him a favor and he needs Pete to meet up with a corporate head of a private jet company.

This seasons set out to redeem Pete. A boy who never really got to be a man until his father passed away. Now he’s lost the one thing that made him feel like a man, his family. The worst part is, they miss him. Tammy loves having time with her Daddy and Trudy can’t even muster a bad word about Pete even when she’s alone with her friends.

Meanwhile Pete grills his womanizing brother who only orders a shrimp cocktail because he has a mistress to get to. Pete just wants to have a grip on this life and has been rife with guilt over his past recently.

Pete gets offered a job in Wichita – the real heartland – away from the New York brothels, the L.A. Realtors, and a new beginning. Even crazier, they wind up wanting Pete so much they’re willing to offer a buyout of McCann. Pete calls this divine intervention. I think it was more of a sense of seeing everyone go. Don disappeared. Pete realized he was never going to be Don, or maybe he was scared he’d become him. Either way when Pete rushes to Trudy at 4am and professes his love and desire for her to run away with him and Tammy she says “yes.”

It was a sappy scene for Mad Men but it felt right. A broken romance repairing itself. Money left on the table. Money Duck cannot believe Don could leave behind, money Pete knows won’t save his marriage. Money Betty knows won’t buy her more time.

What’s your life worth?

Don contemplates that when his car breaks down in Oklahoma. He tries to make himself useful by watching TV, drinking, and making friends with the local con-boy. He’s urged to spend time with other vets at a VFW fundraiser for some random guy’s kitchen that burnt down. After a night of drinks Don confesses that he killed his CO in Korea by accident. The guys at the table all chant the mantra “whatever it takes to get home.” Don agrees.

That night they break into Don’s room and beat him, taking his car keys and accusing him of stealing their money. Don knows it was the kid who set him up. The kid comes back, the feeling of guilt handcuffing him to a certain sense of responsibility. Don chooses his words wisely.

Don: “If you keep [the money], you’ll have to become somebody else, and it’s not what you think it is. You cannot get off on that foot in this life…You think this town is bad now? Wait until you can never come back.”

Don sees himself in the kid and after making him return the money, takes him to the bus stop. Gives the kid the keys to his Cadillac.

We closed with Buddy Holly singing Everyday as Don sits at the bus stop. Is this his Promised Land? Or is the Buddy Holly song a nod to a plane crash, a D.B. Cooper homage? What about Pete working for an airline?

Next week we get our Promise Land. Until then I’ll be watching AMC’s marathon of old episodes and waiting. It’s going to be a long week.