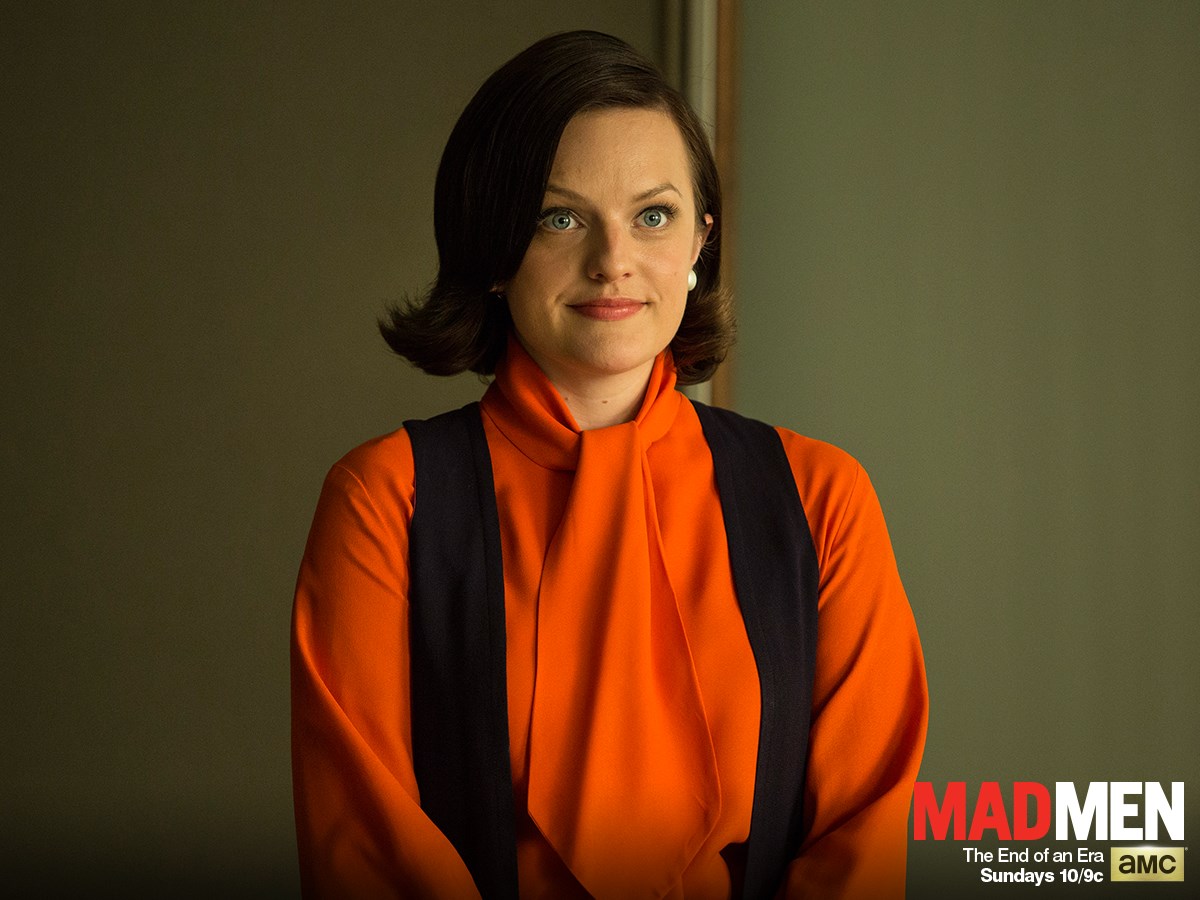 There are only two episodes left in the entirety of Mad Men and while that alone is a depressing thing to write Matt Weiner served us another episode full of soul-searching and heart breaking. This week’s episode was written by Semi Chellas and Matthew Weiner and directed by Phil Abraham and does not waste anytime continuing on the journey theme of the back end of this season.

The move is finally happening. The folks of Sterling Cooper & Pryce have officially moved to McCann Erickson. Well most of them; Peggy’s waiting on her stuff to be shipped over after a snafu lists her as a Secretary and not one of the creatives. Instead of folding she elects to stay in the deserted SC&P offices until her place at McCann is set.

Her fear, as well as our own, is that that place may never come.

The viewing audience knows that even though Peggy may think the Promised Land lies within McCann’s walls the location is quite different. One cannot help but notice the prison-like set up of grays and browns. There’s even “cell” doors opening to release the other inmates as the new meat enters. It’s certainly no coincidence that their first words to Joan are “you got a window!”

Of course it only takes the men of McCann a mere matter of minutes to step on Joan’s Avon account, sexually proposition her, and then try to strong arm her out of her Sterling Cooper money. Joan doesn’t even have the heart to tell her new Beau. Not even a chance encounter with Don in the elevator where they exchange pleasantries can save her.

It seems McCann is a step behind when it comes to Women’s lib and we know that’s a step too much in the past for Joan. She pulled herself up through the company, surpassing underlings and earning her seat on the board. She literally gave a piece of herself to Jaguar. No one will forget that. Will they? We haven’t!

The problem is no one is left around to care. Even Pete, who tells Joan he has her back is ushered off to another floor with another job. As Joan’s story comes to a close she accepts a fifty-cents on the dollar buy out from Jim Hobart (head of McCann and Magoo lookalike) upon the urging of Roger. Joan’s final scene has her picking up a picture of her son and her Rolodex. We can dream about her opening her own agency but it seems like Joan’s best-case lies outside advertising.

If only she stuck around to warn Peggy. It seems like so long ago in Season One when Joan told Peggy to dress like a woman and not a little girl.

Now Peggy is left in SC&P with a surprise guest…Roger. He’s lamenting being on the 26th floor, which he’s labeled the retirement home. We’re not used to seeing them on the screen together. Even Peggy remarks on the fact that they never really talk. Roger is there playing an organ and resisting change. Peggy is there fearing it. Even a Navy story about needing a push doesn’t get them off their butts. A bottle of vermouth helps. They even create a choreographed roller-skating routine, and share ambitions.

Roger: “Even if your name’s on the damn door you should know better than to get attached to some walls.”

Peggy: “Well hopefully I’ll have that problem some day.”

Some people found there way in this episode but don seemed to travel even further down the rabbit-hole of despair and loneliness we’ve come to expect from a Draper.

In the early scenes he’s labeled McCann’s White Whale. As we learned Jim Hobart is a total Ahab but Don isn’t a fish that wants to be caught. He walks out of a Miller Beer meeting and never comes back. Not even his devoted secretary Meredith has any idea where he’s gone while she expertly covers for him.

Let’s take a minute to appreciate Meredith whose presence in a post Mrs. Ida Blankenship world has been dearly looked over. She’s wonderful and brought fully to life by actress Stephanie Drake. As we mourn and lament Mad Men’s passing one thing we’ll remember is its ongoing ability to excel at making minor characters memorable.

But back to Don, who shows up early to take Sally back to school but finds a house with only the maid and Betty. She’s reading Freud, he gives her a backrub. It’s like old times before she tells him that’s enough. They share a flirty look, perhaps a spark or just the understanding that they both have become excruciatingly lonely.

Each may see the road not taken in the other’s eyes. Betty is trying to do something about it. Don recognizes that. Maybe it is his turn to find destiny.

Don drives to Racine Wisconsin in search of Diana, the waitress who has become the controversial obsession of Season Seven. One of the most stunning and fun moments of the episode came with a front-seat cameo of Burt Cooper on the road with Don.

Don: “Remember On the Road?”
Bert: “I’ve never read that book, you know that.”
Don: “I’m riding the rails.”
Bert: “Wither goest now America in thy shiny car at night?”

Don drives all the way to Wisconsin where he poses as a Miller contest associate to gain entry to Diana Bauer’s home to talk with her now ex-husband who immediately sniffs him out as a fraud. Don learns he’s not the only man to come looking for her and is sent on his way in a beautiful Cadillac.

As the episode ends Don picks up a Hippie and agrees to take him to St. Paul. Definitely not on the way back to New York. It seems McCann may have told Don his future is in New York but Don has manifest Destiny on the mind.

“Space Oddity” by David Bowie blares as we fade out on the sunset of the heartland. Don’s no Millar-man, but does that make him an astronaut? The suicide-flag flies high considering the Bowie song is about an Astronaut falling through space, sure his own demise is imminent.

Will Don live to see what the rest of the 1970s have in store?

There are only two episodes left to find out.