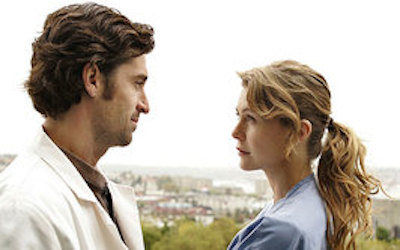 Last night Grey’s Anatomy aired the episode that, a decade ago, would have signalled the end of the series. Certainly, the next episode will be the first since the pilot that feels nothing like the series as it was founded- the fun, flirty tone that made the show a hit is long gone and much of the original personnel moved on ages ago, but the most iconic character was still there and that made the series still feel like what it once was. Now he’s gone.

It’s not a surprise that he’s gone- Patrick Dempsey’s been wanting off the show for awhile and the satisfying sentimentality of the two episodes that led into this made show creator/episode writer Shonda Rhimes’ intentions more than clear- McDreamy was toast.

Grey’s Anatomy knows how to handle goodbyes- they’ve done more of them than most other series combined- and most follow the same full-circle hero’s exit pattern, nearly always resulting in the sort of involuntary emotional reaction that your jaded brain wishes you wouldn’t have (why are you crying at the use of “Chasing Cars”, Kelly? It’s such a cheap trick!). With George, the out-of-nowhere shock made it memorable. With Mark, bittersweet comedy and the strength of even his most minor relationships elevated the cheesy exit pattern to the point where I’m actually not all that embarrassed about sobbing during that one. But Derek is no everyday fan favourite, he’s motherfucking McDreamy, so he got the full-tilt exit pattern package. He saved some lives, he spouted his catchphrase, he showed up in plenty of flashbacks, he comforted a child (Parenthood‘s bratty Sydney) then he died of something he himself could have prevented (“oh the irony!” we’re meant to shout) and he looked his McDreamiest doing it (the perfect blue shirt, that legendary hair styled just right). Meredith got some great monologues out of it and the show smartly stayed away from Grey + Sloan Memorial Hospital to keep the focus on the central couple. It was all very manipulative and surprisingly touching (long-lasting shows get me every time with the flashbacks).

If in 2005 you had said that Grey’s Anatomy could live without McDreamy, you would have been called crazy. You would have been called especially crazy if you included in your prediction the fact that Izzy, George, Burke and Christina would also be gone (not to mention a myriad of great characters who were introduced in later seasons only to be killed off or shipped out). But you would have been right. Grey’s Anatomy, in its current somewhat less charming incarnation, can absolutely live without McDreamy. If you’re still watching mostly because you enjoy the nostalgia of a long-running series, now is likely the time to finally throw in the towel. But, otherwise, rest assured that the show will keep on keeping on. With a new Dr. Shepherd hired as the head of neuro and a new daughter of Ellis Grey on staff (so the show title never ceases to make sense), the Greys producers have it all figured out so that this show can run, no matter who decides to leave, until ABC can no longer find a use for it (which isn’t happening anytime soon, especially with a whole Shonda Thursday lineup to fill).

Personally, I may occasionally miss the signature Derek charm but I’ve rarely looked to him for actual story interest. Tonally, the under-written golden boy’s absence probably won’t even have much effect (unlike the loss of Mark, aka the loss of the show’s entire sense of humour). All Derek’s best stories lay in the distant past so while his leaving is certainly a symbolic loss remembering what the show once was, it’s really not a big one in terms of where the show is now. These days I pretty much just watch for Jackson (and sometimes Callie and Karev; I’ll always love Karev) but even he’ll leave someday and I’ll still watch Grey’s Anatomy. I’ll always watch Grey’s Anatomy, because Grey’s Anatomy will never die. If it can outlive the death of its own legend (in the form of McDreamy), it can outlive anything, and it can absolutely outlive McDreamy.