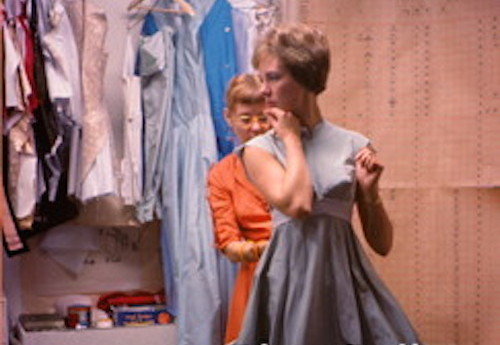 Peeking Behind the Curtain: Blue-Collar Broadway

Broadway. The term, encompassing both an urban location and the style of theater produced therein, is so familiar, so loaded with rich cultural history, that we almost can’t conceive of American theater without it. But while the term may conjure up images from decades of iconic performances, or discussions of an impressive financial, touristic, and artistic industry, it rarely fosters an examination of its own mechanical foundations. Histories of American theater often fail to address how technical aspects of production have changed over time; the evolution of scenic design, costumes, lights, props, and other aspects of craftsmanship usually remains in the shadows.

This gap has finally been addressed in Timothy R. White’s new book, Blue-Collar Broadway: The Craft and Industry of American Theater. White’s book is not just a much-needed history of technical stagecraft. It also examines the role of theater in the urban development of American cities over the course of the twentieth century. Exploring the birth of modern Broadway through an urban studies lens reveals the reciprocal systems underlying an iconic and continually-evolving industry.

White’s book is structured on several significant historical markers. The first focuses on the last decades of the nineteenth century, in which American theater was a prominent but staid form of entertainment. Stock companies, present in most major cities, relied on show “classics” and recycled plots, backdrops, and threadbare costumes. At the turn of the century, the previously dominant stock companies financially floundered, and combination companies, “mobile, rootless, temporary compilations,” took off. This was partly due to the fact that the latter were better able to accommodate the technical requirements of realist theater of the Ibsen-variety; if you are staging a performance of A Doll’s House, recycled costumes and props simply won’t do under brighter lights and higher audience expectations.

No combination companies were stronger than those in New York, and the “Broadway brand” rose to uncontested prominence right up until the 1929 stock market crash. The thirties, in the wake of the Great Depression, saw the rise of radio and film, media that behaved both as entertainment rivals and advertising boons set to woo lovers of show tunes. Mid-century rise in craftsmanship post-World War II revived the ailing Great White Way, bringing to life game changing, smash successes like Oklahoma!. This proliferation of local, physically proximate, skilled labor-based theater craft shops in locations like New York City’s midtown saw its decline in the 1960’s. This period witnessed an exodus of most stagecraft artisans to regional theaters and performing art centers. In the wake of this great migration, the abandoned midtown shops quickly became populated with shady peddlers of smut, adult entertainment, drugs, and vice. With the advent of the tech-heavy megamusicals of the late seventies and eighties, shows such as Evita, Phantom of the Opera, and Miss Saigon, the district soon received a flood of revenue, business that helped clean up the urban heart of American theater.

The depth and breadth of research packed into this concise volume is impressive. But the level of detail, complemented by the inclusion of regional maps and city grids, does lead to certain risky moments where the lay reader’s attention may flag. Thankfully, White is adept at swiftly shifting focus throughout his narrative. Chapters often begin with anecdotes of prominent figures (the costumer Barbara Karinska, the lighting innovator Edward Kook, scenic studio founder Mathias Armbruster, and producer Henry W. Savage are a few examples), providing various opportunities for thick descriptions followed by a zoomed-out perspective that relates these personages and their professional experiences to the bigger historical picture. The writing is most lively when White skillfully employs various metaphors to present his meticulous research. For example, to describe the now-foreign functionality of playhouses in the early 1900s, in which electricians and carpenters often rubbed elbows with dancers, directors, and singers in a “dizzying mishmash of activities” all taking place within performance spaces, we are invited to compare such a cramped and harried scene to the experience of hosting a “full-sized dinner party in a pint-sized city apartment.” These metaphors color the various case studies of popular musicals White uses to detail the swift and often jarring transformation of the American stage.

It is clear that White has as much respect for American theatrical craftsmanship as he has knowledge of its history. Throughout the book, he points out the myriad ways the unsung carpenters, electricians, and seamstresses behind every Broadway hit were instrumental to its success. His affection for the industry can be summed up in one of his key observations: “Good shows have been inspired by everything under the sun, but none of them could be performed until they were built.” Blue-Collar Broadway, based on this clear premise and a deft array of historical approaches and analysis, deciphers a century’s worth of artistic evolution and urban deindustrialization and renewal, singing the praises of artistic trades that have been ignored for too long.