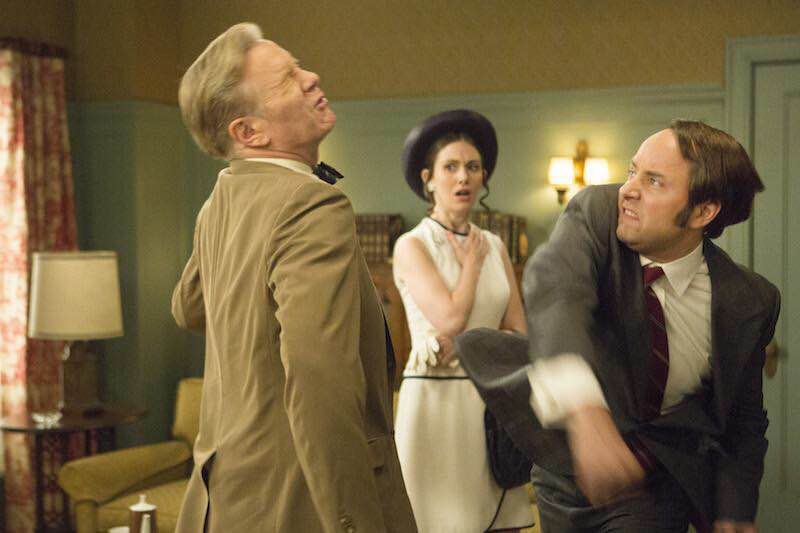 As we cruise through the final episodes of Mad Men it’s important to note the on going theme of recollection. Where have we been? What brought us here?

That probably sounds redundant since it feels like I’ve written that every week but it helps to keep in mind that those questions are not only the theme of the season but of the entire series.

Don is a kid from a whorehouse. Joan was the buxom woman who wouldn’t let her looks hold her back or stop her from being taken seriously. Last night we got a full helping of where Pete and Peggy came from and where they are going.

Perhaps it’s fitting that Time & Life was directed by Jared Harris whose character of Lane’s untimely death marked the official moment Sterling Cooper Draper and Pryce began to fall apart, a victim of its own hubris and mismanagement.

This is embodied by an opening scene with a one-eyed Ken holding Pete and Don over a barrel when it comes to advertising Dow Chemical. Sterling Cooper took Ken’s eye, now he’ll never let them forget it.

Written by Matthew Weiner and Erin Levy, Tim & Life deals with the McCann Erickson dissolving of Sterling Cooper and the gang figuring out a way to move forward. Early on we learn they’ll be moving offices from the Tim & Life building to McCann’s high-rise.

“There’s plenty of room…” But no one really believes they’ll all be going.

Don Draper, Roger Sterling, Pete Campbell, and Joan Harris are sure their days are numbered. They’re enjoyed autonomy since 1963 and now that they’ve signed four years of non-competes they realize there’s not much future.

This episode is about the road less traveled, embodied by Lou Avery’s move to Japan for his comic, “Scout’s Honor,” to be made into a series. “They did Speed Racer, Don!”

This is the last we’ll hear from Lou and it’s nice to see him go out on a personal high note. He always regretted not following his bliss.

Meanwhile Peggy is also dealing with her calling. We’ve seen Peggy come up from the bottom. She was just a secretary when Pete knocked her up on his couch and Peggy gave the baby away for adoption when she chose her career over motherhood.

Way back when Don said “It will shock you how much it never happened.”

Now those words don’t ring true. Peggy has to pick a kid for a commercial and Stan’s ability with the kids isn’t helping.

Peggy snaps at a kid’s mother who leaves her daughter behind. After the girl staples her finger on Peggy’s watch the blow up sends Peggy into a spiral. She confesses her child and decision not to be a mother to Stan who tries to help.

“He’s with a family somewhere, I don’t know, but it’s not because I don’t care. I don’t know because you’re not supposed to know or you can’t go on with your life.”

Despite the resounding chorus of “Kiss the Girl” from the Little Mermaid blasting in my head Peggy and Stan share a moment in her office. Peggy reveals her lost family, her trials and tribulations, and Stan stumbles to comfort her. It’s a gesture she appreciates but doesn’t know how to take it. Stan compares Peggy’s problems to the ones he has with his mother.

“But you don’t understand your mother,” says an irate.

This story is excellently and expertly juxtaposed against Pete Campbell’s return to his roots. Pete, the ignoble father of Peggy’s illegitimate kid has gone down an oddly similar path. Pete’s lost Trudy and Tammy to work but now we can see his regrets as she lives divorced in Connecticut.

When Pete finds out his daughter has been rejected by the High Society Day School he’s up there in a flash trying to fix things. Trudy explains that she has no friends since the husbands can’t control themselves around her. Pete is jealous and takes his rage out on the Headmaster of the school after he’s told the “Campbell name” isn’t welcome because of some 300-year-old execution involving the king. Pete socks the headmaster which both horrifies and arouses Trudy.

Sadly Pete knows there’s not future for him in Connecticut and leaves his home without even staying to see his daughter. This isn’t the path he’s chosen and Pete knows it. Especially since in the back of his mind he’ll be leaving this married life, and the Campbell East Coast name behind if he can move to California with the rest of the partners away from McCann-Erickson.

Too bad the plan doesn’t quite come together.

The execs at McCann have a different idea. Stop playing in the little leagues with cars like Jaguar and brands like Sunkist. They have Coke, They have Buick. And they’re not going to let Don Draper play Pied Piper and take everyone to California.

As each person at the table is promised a huge account Joan is left wanting. In her heart she realizes the overt sexism might keep her out of McCann even if everyone else goes away. Her heart’s not ready to mortgage love for money.

That’s left up in the air as a night of drinking where everyone has someone special to go home to except Don. He searches for his mystery waitress but only turns up with two gentleman callers whom he rebuffs with a look of disdain in typical Don fashion.

As the episode closes the partners are excited about the move to McCann but the workers of the office, including Peggy and Stan, plus all the secretaries, realize this may be the beginning for Don and company but it feels a lot like the end to them. As Don tries to woo them with words as he’s done thousands of times before they continue to buzz and chirp to one another, droning out Don’s pleas.

Yet Don doesn’t protest. He doesn’t even try to raise his voice. Maybe he’s done with this world that keeps taking from him when he gets less and less back. There are three episodes left for him to figure it out…if he ever does. Time and Life indeed.