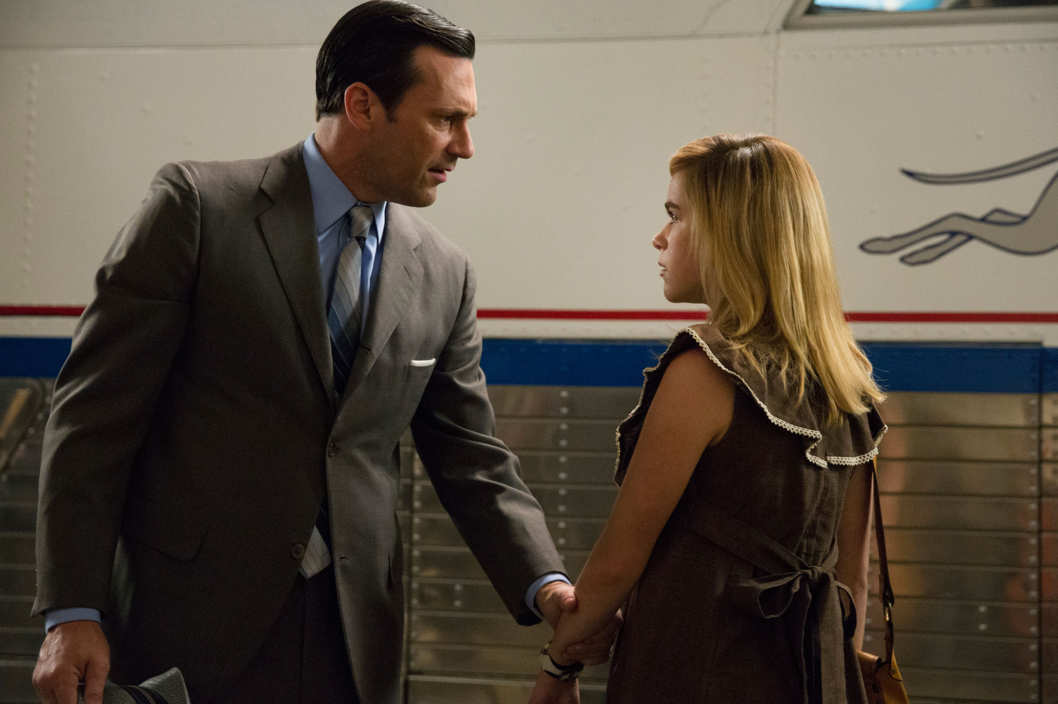 Mad Men is back! I mean, it’s been back for two episodes but last night you felt the last season hit its stride. We got full helpings of Don, Betty, Sally, Glen, Joan, and even a great runner involving what’s happening in the future. Poetic and foreboding? That’s Mad Men’s bread and butter. Or Bourbon and ice, as it were.

“Before McCann I thought ‘Will we be in business next year?”

As the final episodes tick away this seems like the meta-theme of the story. Where is everyone going? What happens next? We’re at the mercy of the court.

Last night’s episode was all about parenting and a parent’s relationship to their children. The episode was written by Jonathan Igla and Matthew Weiner and directed by Jennifer Getzinger and right off the bat we have to talk about the reemergence of Glen.

In past iterations we’ve seen Glen as the weird chubby kid, the 60’s protestor and iconoclast who ignores the advances of Sally’s roommate but as Glen grew we always knew his heart belonged to Betty Draper. Since the first lock of hair was exchanged the oedipal advances and innuendos but last night it all culminated.

Glen shows up at Betty’s new digs to tell Sally he’s headed to Vietnam. We get a bleeped F word and the dividing line between Sally and her parents. Sally is pissed at Glen, Betty says she’s proud. As Sally storms off there’s a fleeting glance between Glen and Betty.

When Glen turns up in the kitchen later and goes for the kiss Betty rejects him. She’s gotten what she needed from him – flattery, support, acknowledgement, and power over the situation. She rebuffs him but lets him touch her face. It’s an intimate moment. One Glen will never forget, even in the jungles of Vietnam.

Another metaphorical parent relationship played out as Don is stuck between Peggy, Mathis, and Pete – They’re trying to get a Peter Pan cookie off the ground. We’ve always known Mad Men is a deep show but using a cookie sponsored by cartoon character about a boy who never wants to grow up/has no parents is genius. Genius. Stop and slow clap because this is the brilliance we’ve come to take for granted from Mad Men and won’t truly appreciate until it is gone.

Don steps in the middle of them to mentor Mathis, a nerdy guy who last episode tried to set Peggy up on a date. When Mathis fumbles Don’s advice and takes it out on Don he acts like a spoiled child. Bringing Don’s looks into contention.

“You don’t have any character. You’re just handsome. Stop kidding yourself.”

Don fires him, metaphorically spanking him for talking back.

It’s clear that Don has stepped into the role of parent in the office. Peggy begs him to do her performance review, then stomps out when he asks too many questions. Roger elects Don to put together the 2,500 word “State Of The Company” speech because all the other higher ups have passed the buck and know Don will be the guy to take responsibility. Look how far he’s come. Or has he?

Mixed in with this is a stand-alone story of Joan trying to balance being a mother with being a powerful, perpetually single woman, trying to find love. Her son is her anchor, taking her out of dates, brining her home early, and leaving her at the mercy of the babysitter.

Luckily for her she meets Richard, a real estate developer (and silver fox) looking to live it up now that he’s divorced and his kids are grown. Things seem to be going great but Richard doesn’t want to be involved with a woman who’s tied down. He tries to make Joan choose between her son and her life. Joan’s not sure how to answer. We’re not sure what we want for her. It’s a crisis.

When Richard rebuffs Joan we hate him and when he returns we’re still not sure this will bring either of them happiness. Then again, when have we ever been sure that any feeling presented from this show will be anything but fleeting?

Almost as fleeting as last seasons “I love you” uttered by Sally as she exited Don’s car. We weren’t stupid enough to think their relationship was perfect but as we see in this episode Sally is all grown up, and so are her friends. She’s about to embark on a school trip across 12 states, we know she likes the taste of trouble and so does Betty.

She tires to lecture her daughter but also share her own mischievous side. Sally brushes this off and then lets it fuel her rage when she discovers Glen only visited to flirt with her mother. Can’t Sally catch a break? Nope.

As Don is hit on by a “fast girl” at a Chinese restaurant Sally looks on with disdain. Glen’s shipping of to ‘Nam, Mom’s going back to college, and Dad hasn’t changed one bit. Sally has no idea what she’s going to be in the future but she’s certain it’s not her Mother or Father.

Don breaks the bad news the only way he knows how – with a stern look and a caustic compliment.

“You’re a beautiful young girl. It’s up to you to be something more than that.”

I truly hope this is not the last we’ve seen of Sally as she boards the bus. She’s a girl who’s been raised by the fakeness of a father in advertising, a stepfather in politics, and a mother who just wants to be noticed. In a world of liars you can always count on Sally Draper to deliver the truth and to help Don unravel.

The episode’s short runner has to do with Don selling the apartment Megan left stripped to the bone. It’s got wine stains, memories both good and bad, and a Realtor who’s taken with Don’s looks but not with his asking price.

Don asks her to lie about the place, put a spin on it that will attract customers. Don swears there’s a lot of good memories there. He’s not lying, just leaving out the less bright spots. The literal and figurative stains on the carpet.

As The Forecast ends we dolly away from Don. A new couple has purchased the penthouse. Man and pregnant wife. Their lives are beginning and Don’s is ending…or is it?

We have no idea if The Forecast is about Don’s rebirth or Don’s demise. That’s what made last night feel so special. Don is now an empty nester. A man who has nothing tying him down like Joan’s Richard. Will he run out and get something new and shiny? Perhaps Don should take a good look at the speech about the future he’s preparing…we wait with bated breath.