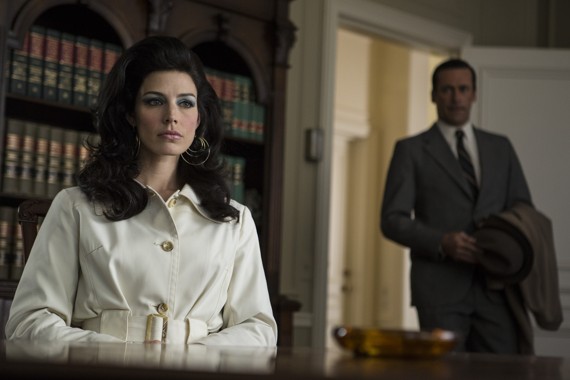 For an episode that opens with Don Draper making chocolate milkshakes things sure took a dark turn as Don spends another episode yearning for a life that could have been lived.

New Business feels like an inevitable episode, one that doesn’t excite with outrageous set pieces or twists but one that gets to the heart of every character and alludes to where they are heading.

Don, still in a daze from finding out Rachel had passed away, continues his obsessive courtship of the waitress, Diana. In a continuing theme it seems Don draws in people as damaged or even more so than himself. Diana has lost one daughter to the flu and another to her Ex. She’s in the big city hoping to turn it around. Even as Don hugs her compassionately while she creepily checks out Sally Draper’s bedroom you have to think the only thing running through Don’s head is “Why can’t any of these women make me happy?”

Seeing the Rosens on the elevator can’t help too much. Another one of Don’s conquests, one that almost destroyed his relationship with his daughter.

Don’s life appears to be flashing before his eyes…foreboding much?

This comes after a funny beat with Betty where we find out she plans on going to get her Masters in Psychology. Don’s smirk, along with the viewers, might be a final farewell to Betty who seems like she’s got her life together; a socialite husband, two kids at home, one in boarding school, and the ability to gain some sort of control on her surroundings. She’ll always be the disturbed housewife firing a rifle at birds to me. It seems as if the violence and lashing out has left her to more passive aggressive ways.

Meanwhile, in the realm of Don’s current and soon to be Ex-wife Megan, this episode seems to be a fond farewell to her. We get the arrival of her sister and mother who lament Megan’s loss of a husband.

Still, Megan has ulterior motives, squabbling with Don and asking the Movers to take EVERYTHING in the apartment. This allows for the arrival and hero moment for Roger who swoops in to save the day and, probably, bed Megan’s mother one last time. Why not? She’s left Megan’s Dad and wants to be happy…

Don is not alone in this struggle as Peggy, who has blossomed as a Draper doppelganger looking to find her own way, is faced with a pretentious artist who’s working on their ad campaign.

It’s a short series of scenes where Peggy gets to awkwardly deny the advances of a powerful woman but also gets the rug ripped out from under her when she realizes this lady uses sex to manipulate everyone around her to get her way.

Peggy desperately wants to be top dog but as she learns time and time again, some people are willing to sink low to get higher.

All of this juxtaposed against Don’s story seems to show us the inevitable fall of Rome, or Camelot, or Don-a lot. The Draper dynasty is tumbling. As mentioned before this won’t be an episode touted for revelations but it will be one we remember as the show comes to a close.

This could be Don sarcastically telling her to “F*** off” but instead it becomes a lamentation. Megan is driven by much of what drives Don; money, prestige, access. But Don is older, wiser, and knows the kids of loss it takes to get ahead in this kind of business. He knows what kinds of loss are ahead of Megan; love, life, happiness.

I know we’re out of the Sixties now but Don Draper may have finally figured out that money can’t buy you love. As we look on to the next episodes expect this revelation to start Don reeling out of control, or in control. You never know with this show.