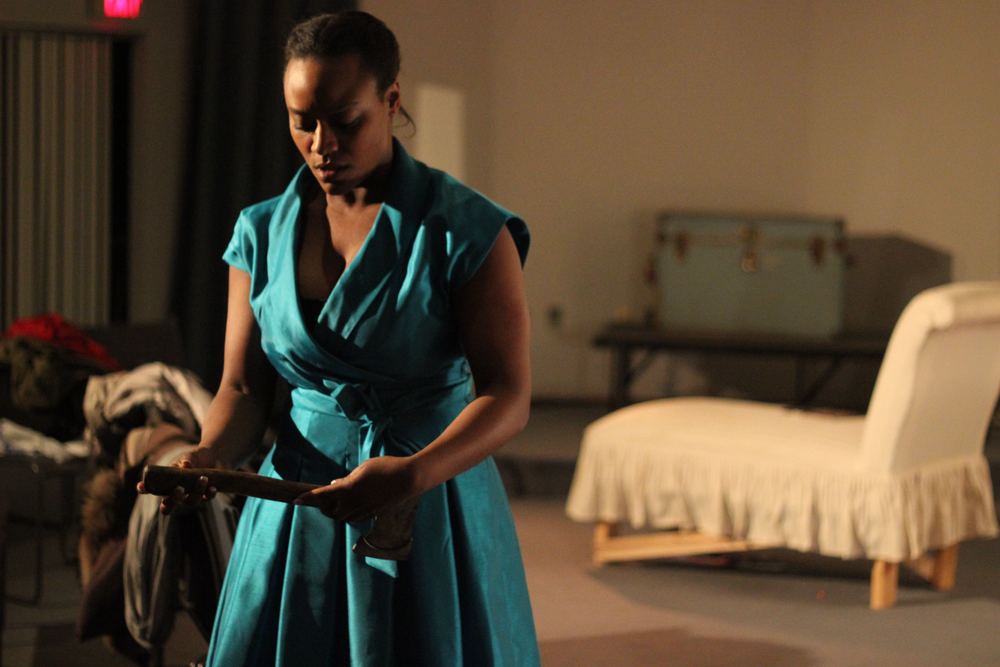 Fresh Ink Theatre staged an intriguing spin on the Oresteia and Iphigenia plays of Aeschylus and Euripides at the Hale Chapel in First Church Boston. Agamemnon (Robert Cope), the leader of the Greeks in their decade-long war against Troy, paid a terrible price to enable his fleets to arrive on the shores of Ilium; his wife, Clytemnestra (Jade Guerra), waits at home to exact her revenge when the weary Aegeans return victorious. What follows proves even more chilling than the powerful, more-familiar events of the Iliad and Odyssey. Written by A. Nora Long and directed by Caitlin Lowans, the Clytemnestriad presents this bundle of classic Greek stories primarily from Clytemnestra’s perspective, and the piece explores themes of ritual, of the weight of appearances in times of war and peace, of family loyalty, and of honor. Although the piece also seemed poised to crack open views of marriage and motherhood in Greek classical texts, it didn’t quite deliver on that promise. The strong script was strongly acted, but the overall staging was shaky, undermined by clunky scene transitions and muddled lighting/sound cues. The intimate space was appealing, but didn’t lend the piece as much urgency as could be desired. This was not the strongest Fresh Ink show I’ve seen, but there is still plenty to enjoy here.

The beginning and the abrupt end of the piece are its weakest points. The beginning is halting; although I enjoyed Melody Martin’s take on the bubbly and passionate young Iphigenia, her opening exchanges with her mother felt forced, both the girl’s youthfulness and the mother’s retentiveness overplayed. The opening smooths out, and Martin went on to provide many electric moments. Iphigenia is just as powerful as a symbol as she is a flesh-and-blood character: her silent, haunting stares shake the otherwise unflappable Clytemnestra, and one of her best moments in the show involve her simply sitting and listening to the now-fatherless Orestes (Alex Marz) as an anonymous schoolmate.

Clytemnestra carries most of the weight of the production. Guerra offers a much fresher take on the oft-maligned, “psycho-bitch” husband-killer of the traditional Greek stage. Her gentleness and restraint, her non-neurotic desire to keep a lid on this less-than-ideal home, her cool, ultimate decision to take her husband’s life, turn the figure of Clytemnestra into a woman with agency, not driven animalistically by lust or vengeance but by a resolve to take a stand, knowing she will not long outlive her final act of justice. Guerra delivers these glimpses of Clytaemnestra with poise and control; she manages to convey as much grief and rage in rearranging a fold in her dress or adjusting a cosmetic on her boudoir as she does in any of her speeches.

Agamemnon was all convincing world-weariness, but frustratingly devoid of the arrogance, aggression, or maddening selfishness that could motivate his well-known actions. It didn’t make for compelling chemistry onstage with his wife, either. Marz’s Orestes was far better as the queasy, pitiful victim-of-circumstances, a kid driven to murder when all he wants to do is ask out the cute girl in his geometry class.

Shanae Burch’s Elektra is a bit much to take in at first. Manic energy and voice are fine and dandy, but one’s words still need to be comprehensible, particularly in the acoustically-unfriendly space. Burch was far better in her moments of quiet madness, and subtle in her portrayal of young Clytaemnestra. That being said, Elektra’s pseudo-panic attack on Iphigenia’s ill-fated wedding day is one of the play’s high points.

I couldn’t shake the feeling that I was not seeing the best rendition of this specific production. Thankfully, this lukewarm response of mine is not characteristic of how I usually take in this company’s shows. I look forward to more Fresh Ink, especially when they move into their new home at the BCA (starting with their fifth season).