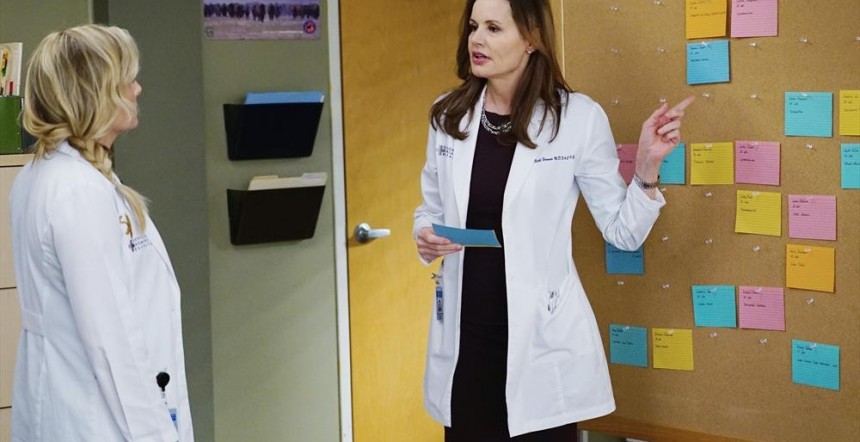 Grey’s Anatomy: Starting at the End of a Great Arc

Even after 10 seasons, Grey’s Anatomy continues to remind me of why it deserves to stay on television. The writers have an amazing way of creating character centric episodes that don’t seem forced upon. They also have a really great way of introducing new characters and suddenly making you fall in love with them in a matter of 43 minutes. I’m not sure why I’m still surprised that I love Grey’s. ABC clearly loves it and this show is essentially what put Shonda Rimes on the map and led to her having an entire night of dramas which are arguably just as good as the original.

Thursday night’s “Staring at the End” was the penultimate episode (one assumes) for Dr. Herman’s brain tumor storyline (now I’m going to suspend all disbelief here and pretend it could totally happen that a renown neonatal surgeon just so happens to have an incurable tumor in the very same hospital where an up and coming brain surgeon is dying to prove herself and step outside of her equally talented brother’s shadow…this is a Shona Rimes show after all).The episode fast-tracked over about a month and highlighted Dr. Herman’s tutelage of Arizona. Meanwhile, Amelia is giving what could be the talk of her career as she outlines her plan to remove Herman’s tumor.

The really powerful aspect of this storyline is the transformation of Dr. Herman. She went from being a purely sarcastic, somewhat rude, overly confident tyrant to someone with a bit more personality and fun. I love me some Geena Davis, and I think she’s done a great job with this character but I really haven’t been blown away by her performance; however, this episode came the closest to wowing me. The pivotal moment was Dr. Herman’s speech about how Arizona and Amelia have given her hope. She was ready to die and she had accepted her death as inevitable, but now she had hope and damn was she upset about that. The hope explains Nicole’s transformations. It explains why we’ve seen a character who smiles more and actually wants to be around Arizona. More importantly it highlighted what this show focuses on best which are human emotions. Dr. Herman’s fear of death, her frustration with the radiation treatment, and ultimately her workaholic nature are all highlighting how she deals with grief. At the end of the episode, as Herman is wheeled away to her surgery, Davis gives her best performance yet as she just stares at the ceiling. It gave me chills. It’s silly that after 11 seasons Grey’s can still do that, but this is why I love television.

The secondary storyline surrounded Amelia’s desire to be her own Dr. Shepherd and not the Other Dr. Shepherd (or God forbid the wrong Dr. Shepherd). For someone who’s been in the background of most scenes for a while now, it was refreshing to have an Amelia centric episode. I have to admit I’m starting to like this Dr. Shepherd more than the original one and wouldn’t be all that upset if McDreamy stayed away a bit longer. Amelia has real promise as a long term character on this show. I’m looking forward to her relationship with Owen blossoming a bit more. More importantly though, the audience has someone to root for. It’s been a while since this show left me desperately anticipating the next week’s episode. Ultimately, this episode is setting Amelia up for failure and is setting Dr. Herman up for death. I hope they’re trying to pull a fast one on us. I hope Amelia triumphs at her never-before-done surgery and I hope she does make a name for herself. Being that she’s a member of AA, I could more easily see Grey’s take the dramatic route as we watch the downward spiral of the other Dr. Shepherd post a completely failed surgery. I hope not. I want a happy ending for Dr. Herman. I want her to live and maybe retire and go have lots of sex with younger men (she seems to like sex). I also want Amelia to succeed so she doesn’t fall of the wagon and so she finally respects herself. The one moment I hated form tonight’s episode was when Callie asks Amelia if she’ll be getting help with this surgery. It seemed so unnecessary of a comment and seemed pretty harsh coming from Callie, but I hope it’s just adding to the doubt and not foreshadowing. I also really hope it doesn’t mean Callie’s going to call Derek and make him come help. Alas, we shall find out this Thursday and I will be waiting very impatiently to see what happens.