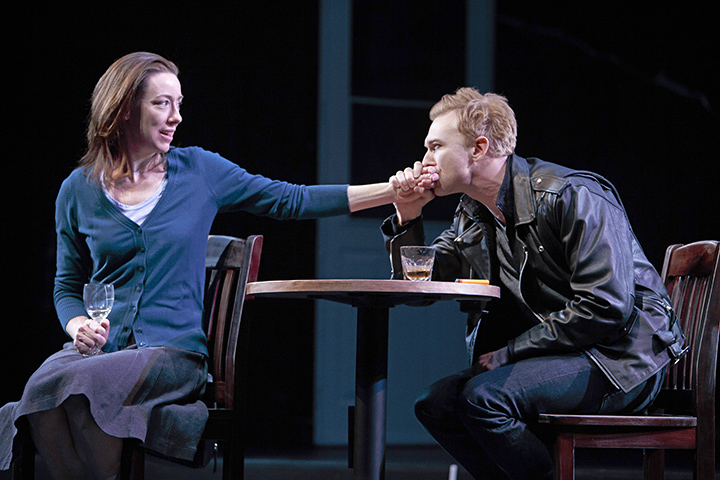 Don’t believe everything you read on a billboard on Front Street.

Harper Regan is small theatre. Sure, it’s got the big budget and the gigantic venue and one of the actors from House of Cards, but what makes Harper Regan good is that the aforementioned dramatic thrust stage makes the aforementioned gigantic venue less alienating, and the excellent cast (one of the actors from House of Cards chief among them) knows better than to lean on their big budget or attempt to compete with the grandeur of the big blasts of light and loud blares of Sound Design (someone also made the key choice of allowing them to speak in their natural accents which makes for a few moments of awkward vernacular but altogether truer performances).

This production of Simon Stephens’ strange, personal drama about a woman searching for herself after the loss of her father might have been marvellous in a 100-seat black box where the entire audience, not just the privileged first few rows, could examine the foreboding furrow of Molly Parker’s brow, applaud the detail in Vivien Endicott-Douglas’ beautifully realized dual-role performance, and feel the room shake with an emotional tempest of the amazing Philp Riccio’s making. I still don’t think “groundbreaking” would have been in the cards but “marvellous”, absolutely.

Spared of director Matthew Jocelyn’s dramatic over-thinking and the designers’ dramatic over-working, Harper Regan might have made grand small theatre. As it is, it’s fairly un-impactful big theatre.