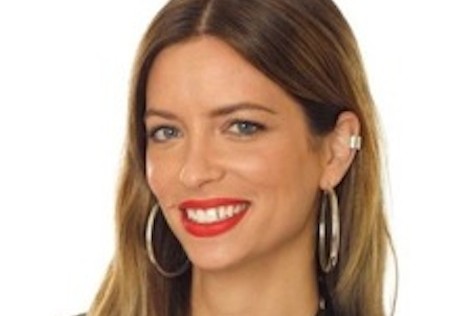 Before we announce the winners of the 2014 My TV Awards, we’re proud to present our annual Nominee Interview Series.

In one of the best casts in recent Project Runway history, the sweet and funny Amanda Valentine stood out, armed with a stronger sense of self and commitment to her unique point of view as she returned to the runway for a second chance at the fashion title. She may have come up just one spot short of the win in season 13 but Amanda set herself up as not only a personality worth rooting for (and Best Female Reality Star nominee) but a real designer to watch.

What first got you into fashion? Who are some of your favourite designers?
My mom made our clothing growing up (I’m the youngest of 5 children, so economic dressing was a necessity!) and as I got older I took an interest in sewing, though I was always making myself costumes growing up. My all time favorite designer is Yves Saint Laurent. Right now I love JW Anderson and Proenza Schouler.

Were you always so clear in your personal aesthetic or was that something that came with time?
I’m not sure- I think it’s become more laser focused the older I get, but I think to some extent I’ve always had a “vibe” that people can recognize. I mean- I swear I dress the same way I did when I was 15, so I think my aesthetic priorities are the same as well!

What would you say are your greatest strengths and weaknesses as a designer?
Weakness is easy- I have a short attention span and have a really hard time FINISHING something. I’m already on to the next thing. Which, is actually really great for fashion!

So I would say my strength is I’m built for the industry. I want the next thing to happen yesterday! hahaha

How did you end up on Project Runway?
I was contacted years ago and auditioned but didn’t make it on. They continued to contact me but I took a couple years off auditioning because it didn’t seem right for me. I’ve never wanted to be in front of the camera… My husband nudged me to audition and voila! I made it on Season 11!

Your first time on the show you ended up in a season with all team challenges. Were they always as much of a hindrance as they seemed or were there times when you felt like working in a team made you a better designer?
I will be honest, I hated every second of it. When they surprised us with that news Episode 1 (it was a TOTAL surprise to us)… I very seriously considered leaving. I can be a bit of a people pleaser and I KNEW that I would get lost in the shuffle. I knew exactly how it would go and I was terrified. I don’t think the team work made me a better designer but I think going through the experience and learning how to fight for your ideas did.

What was your biggest regret after your first time on the show? What would you have done differently?
My priority Season 11 was pleasing the judges. Every challenge was approached that way- what do the judges want to see? So the last thing I thought about was what I had to say or where my point of view was within it all. So I didn’t leave an impression.

Coming back for a second season, what would you say is the most valuable leg up you had on the other contestants from having played the game before?
Understanding the time constraints. It’s SO much less time than it appears on TV and knowing how fast you have to run out of the gate was a huge advantage. I also just kind of knew “how things rolled” and could relax a little.

On the show we saw a lot of hostility towards you for having a perceived advantage. Could you feel that in the workroom or was it mostly all hidden in confessional interviews? Was it tough to watch back?
I totally get it. I would have felt the same way. But I just wanted the same courtesy of looking at it from MY point of view. Wouldn’t you want a second chance? Everyone was VERY friendly to me at the beginning, then it started to get weird. But for the most part, people were very kind.

Do you feel like your edit on the show captured who you really are in real life?
My best friends say “Yep, that’s exactly how you are.” And I agree! I make goofy faces and bad jokes very regularly. I was very much myself on Season 13.

Do you think anyone received a particularly inaccurate edit?
Nope. The editors can’t use anything you didn’t give them.

What would you say was the biggest surprise about either of your seasons that you discovered watching it back on TV?
It’s always shocking hearing people “go after you” in confessionals. And it’s always someone you think you were cool with- or didn’t really think of at all! It’s a little jarring.

You made it all the way to the end in your second season. What would you say were some of your strongest and weakest looks along the way?
Weakest look was definitely the Makeover Challege- or the “real woman” challenge which is so embarrassing because our #1 job as designers is to design for REAL women! Ugh. That was the only time I was in the bottom and I totally deserved to be!

My strongest look was probably the Vintage Suit Redesign. I loved that dress… and it started as a stained mauve polyester leisure suit!

Are you happy with your performance the second time around?
Thrilled. I wanted to make it to the end and 2nd place ain’t so bad. I got very close with Sean and was thrilled to see him win. He’s brilliant and deserves everything.

What was the toughest challenge?
The Real Woman/Makeover challenge! I spent so many weeks focused on my point of view that I got a little lost when I was trying to please someone else. It’s a delicate balance.

Favourite/ least favourite challenge?
Favorite was the Chopard challenge or Red Carpet because I NEVER design formal wear so it was a terrifying/exciting challenge. Least favorite was probably the wedding challenge. It was a partner challenge and I will just always struggle with teams.

What’s Tim Gunn like? Were his critiques helpful or mostly just stressful?
I adore Tim. He’s even cooler/funnier/sweeter than he appears on TV. We still text from time to time. I saw his critiques as VITAL to my process- I really came to rely on him. I saw a lot of designers be defensive or combative with him and I wanted to say- hey, you’re doing it wrong, he’s here to HELP.

Tell me about the other contestants- anyone you particularly liked or didn’t like?
I got really close with Kini and Sean- especially towards the end. We all still talk- and they are just the real deal. Funny, sweet, genius.

Do you keep in touch with many of them? Do you ever work together?
I keep in touch with a lot of the PR family! Just had drinks with Stanley and Samantha from Season 11 in LA… and saw Mychael Knight (season 4 and all stars) who I became friends with a few years ago. Still talk to Kini and Sean. And Michelle who won Season 11. Seriously, they are my awesome extended family now.

What’s been the effect on your career?
It’s like the greatest commercial you could ever ask for! It’s just really helped my visibility. People want to keep up with what I’m doing now- I think in part because they saw me as a real person and saw my process and how much I care about what I do! I love it. I’ve stepped back from Wardrobe Styling and run my clothing business full time now. All because of the show.