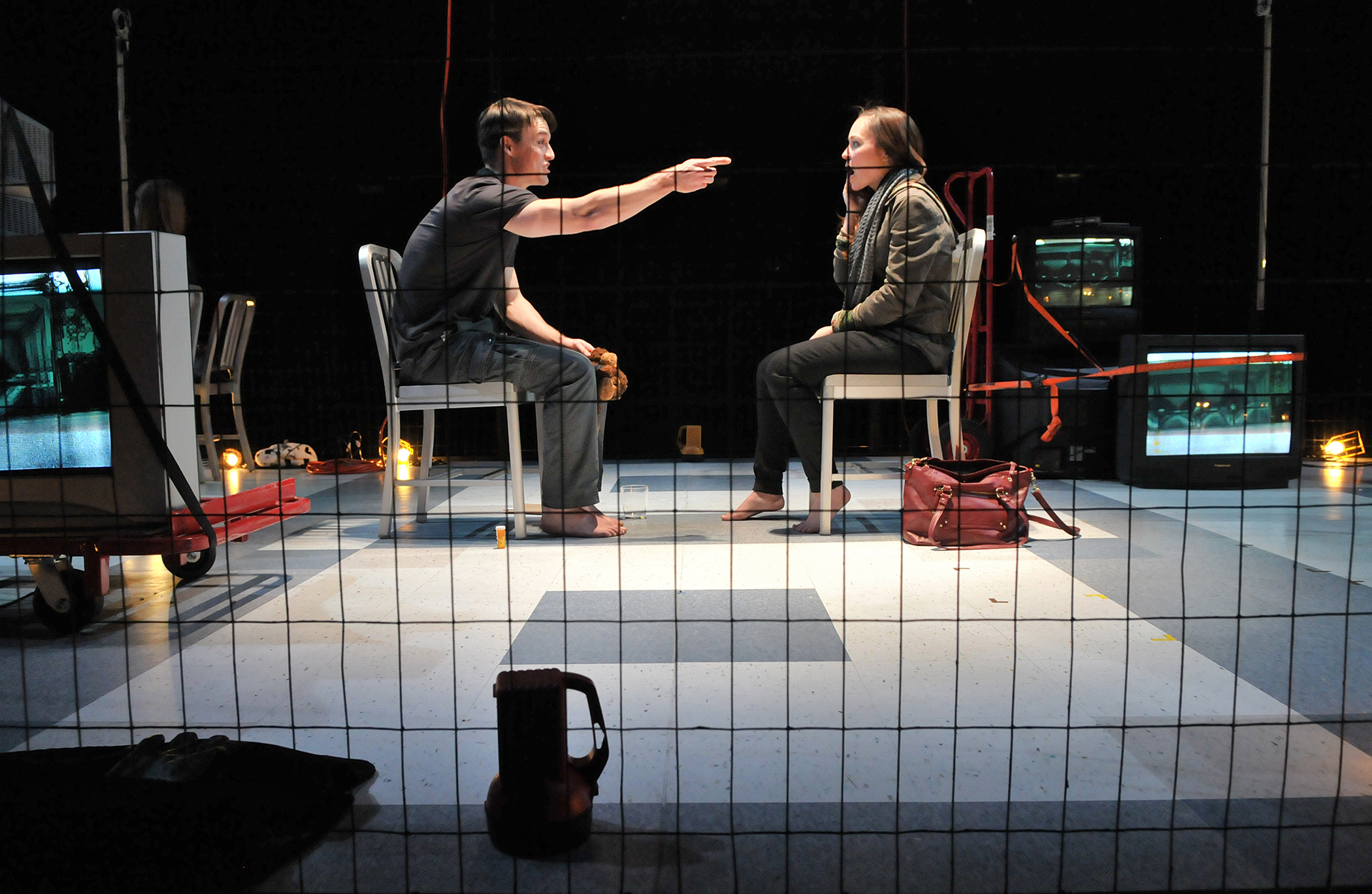 All it takes is one well-placed, often shocking line to permanently cement a show in my mind. In Necessary Monsters, John Kuntz’s new play, I ran into that line about halfway through the two hour performance, at the pit of this nested, Russian-doll-of-a-show. An upper crust, philanthropic socialite (actually a performer in drag (Thomas Derrah) who has been lying motionless at the far end of the stage for over an hour) appears to arise from her grave to greet invisible guests at some benefit gala. Airily admitting to not really knowing (or caring) what the benefit is for, she presumes its for disadvantaged children of some stripe or another, perhaps maimed or victims of severe burns. She then asserts the importance of holding these events for the sake of those “limbless, crispy tots.”

This is just one example of the horrible and mesmerizing language Kuntz uses to weave several narratives together into the episodic, not-unpleasantly-disjointed Necessary Monsters. Directed by David R. Gammons (who never disappoints), this new play eerily and effectively combined an incredible ensemble of actors (Derrah, McCaela Donovan, Stacy Fischer, Evelyn Howe, Kuntz himself, Georgia Lyman, Greg Maraio, and Michael Underhill) with effectively coordinated audio/visual elements (lighting design by Jeff Adelberg, sound/video design by Adam Stone). The result was a show with different angles of presentation, portraying different perspectives on reality in all its ugliness and weirdness.

The play was staged at the Stanford Calderwood Pavilion at the BCA. The traverse set was boxed into a massive metal cage that slowly became littered with all manner of detritus (scenic design by Cristina Todesco). Looking through the cage at the actors, and beyond to the opposite set of audience members, I noticed that both groups of people looked caged, and that we on our side must have looked so as well. My own apparent position outside the cage was just a matter of perspective, just one way in which I could anesthetize myself against a perceived reality. The fact is, we were all on display.

The actors, dressed in grey and black, lay motionless on the floor. One by one they rose and walked about the cage as the audience settled in, moving stiffly about, preparing for deft physical performances. The sounds emanating from the speakers began to warp into screams and cat-like yowls, mixed with robotic instructions evocative of airplane announcements. I did not feel ready to sit back, relax, and enjoy the flight.

The “plot” of the play seems to revolve around a huge tragic event from which every other layer of reality stems out from. We are flooded by a series of scenarios: a blind date, a nightmarish, otherworldly visit, a psychiatric session, a visit to a night club, a saccharine and unspeakably horrible children’s show being filmed. Serial killers, adultery, trauma, stalking, drug-induced endless phone calls, police procedurals and noir-ish film dramas that feel just as real as anything we witness soon follow. We reach the pit of hell when we descend to the benefit dinner I described earlier. The lack of interruptions for this extended scene made my palms start to sweat; I had come to depend on the very dissonance that almost didn’t allow me as an audience member to keep my bearings.

What I most admire about Gammons is that whether staging a classic text or a bold new work, he takes calculated risks and introduces innovative flourishes that are not arbitrary. As Jeremy Goodwin, writing for the Boston Globe, put it, that marks the difference between staging a work that is “intriguingly disorienting” versus one that could be “just confusing.”

I heartily agree with dramaturg Walt McGough that trying to describe this play feels like trying to grasp at smoke. Nevertheless, I highly commend SpeakEasy for boldly staging this work. During this disorienting production, I never felt frustration or annoyance with the material. Perhaps that’s because rather than being spoon-fed a reheated text or walked through some “experimental” venture, I was thrown headlong into a new experience with no thought whatsoever for my metaphorical “safety.” An audience responds well when they are deemed capable enough to come to their own conclusions.