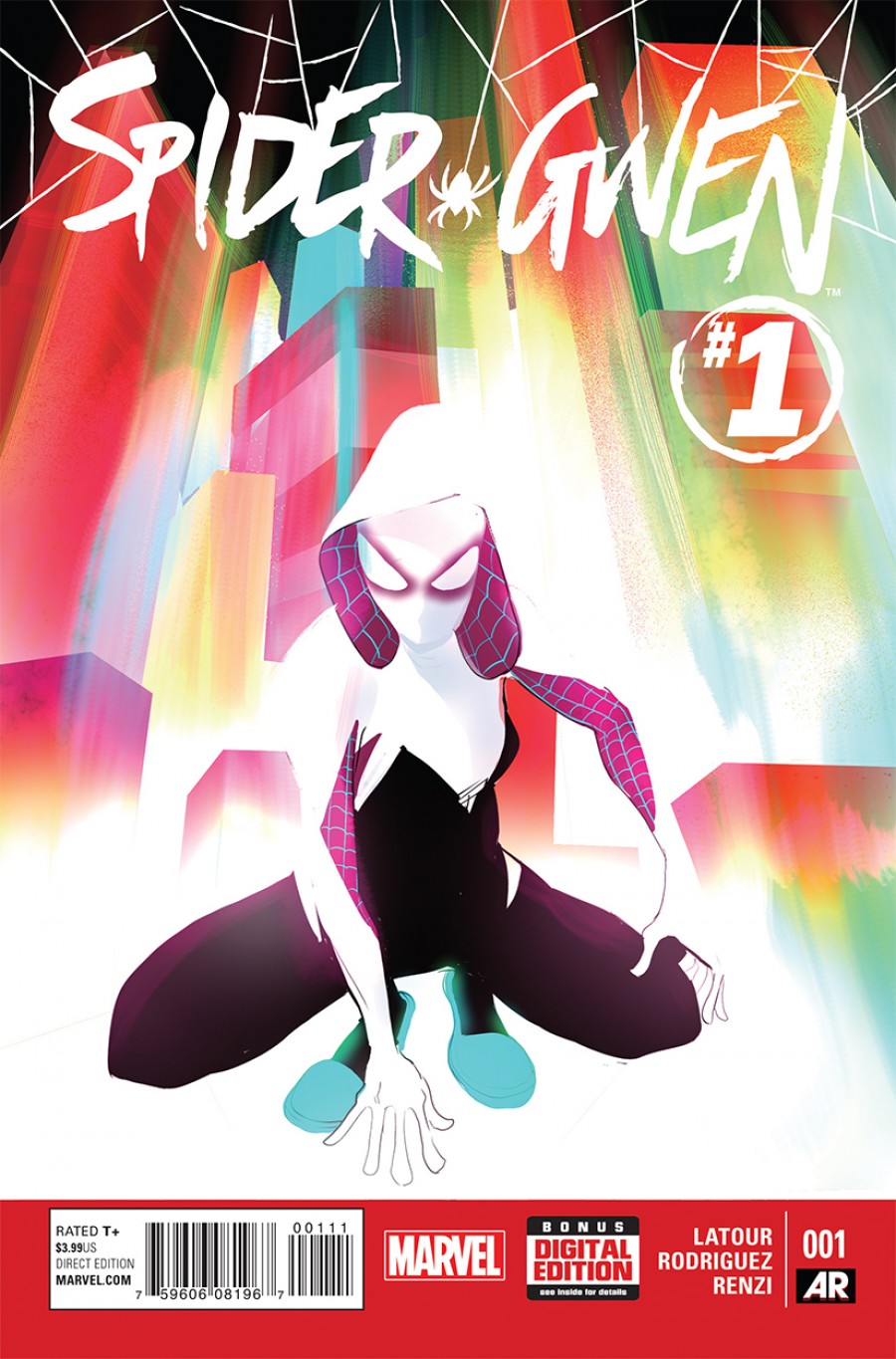 Bliss For The Spider-Women: Spider-Gwen

There’s something deeply satisfying about discovering a competent, innovative cover version of one of your favourite songs. I have a great deal of admiration for artists who not only re-record someone else’s tune, but reinvent it and put their own spin on it in a way that showcases just as much artistry as the source material. Admittedly, I’m the kind of nerd who makes playlists comprised of multiple renditions of a single jazz standard.

That fascination may be part of the reason I’ve become so enthusiastic about comics in a relatively short amount of time – this, after not being a regular reader for years. There seems to be a trend to create variations on classic metahuman themes. Whether it’s fans giving voice to their dreams on social media, publishers reaching out to untapped audiences, or a restless generation of writers and artists wanting to reimagine iconic features of the medium’s landscape, the recent winds of change have been off the Beaufort scale. And, other than Superman’s loss of his red briefs, I’ve liked what I’ve seen out there. I previously mentioned Batgirl’s revamped costume, as one example.

In the summer of 2014, Marvel put the wheels in motion for an epic-scale event involving every interpretation and permutation of Spider-Man that has ever been seen. Seriously. They decided each one inhabited his(or her… I’ll get back to that very soon) universe and that there was a dimension-travelling threat to all of them. The whole multi-faceted Spider-Verse needed saving and the best way to do that was to team up. Spinoff Arachknights from decades-old titles as well as co-existing modern ones, the webslinger whose animated television show theme song has a tendency to get stuck in my head, Tobey Maguire’s silver screen character, and even the Spider-Man who flopped(sometimes literally) on Broadway were referenced or showed up to join their fellow Spider-Types and fight the good fight.

The Amazing Spider-Man comic book, which follows the modern exploits of Peter Parker, was rebooted relatively recently and his oft-retold origin was tweaked to give the famous radioactive spider a second victim, another student. Cindy Moon developed powers similar to Peter’s in isolation and her heroic persona, Silk, has recently spun off into an original ongoing publication that will be published under that name.

A resident of the same universe, Spider-Woman a.k.a. Jessica Drew, also did her part to save the Spider-Verse and, in the course of that multi-title narrative, a series bearing her moniker debuted. An established character in her own right who counts The Avengers among her most recent affiliations, the books will follow her, going forward, as her path of future heroism unfolds.

In addition to developing a new hero creatively hatched from a well-known source material and opening new doors for a recognized member of the Spider-Family, the anything-can-happen starting point of the Spider-Verse storyline was also fertile ground for some innovative interpretations of Spider-Personhood. A particular fan favourite was a Spider-Woman from a different universe wherein a parallel famous radioactive spider bit Gwen Stacy instead of Peter Parker. She first appeared in Edge of Spider-Verse #2, the second issue of a collection of one-shot comics that introduced or re-introduced Spider-People to readers. That chapter was written by Jason Latour, drawn by Robbi Rodriguez, and coloured by Rico Renzi. For the sake of differentiating her as she comes onto the scene, this Spider-Woman’s standalone adventures have the name Spider-Gwen on their covers.

Spider-Gwen #1 follows Spider-Woman back to her own universe where she’s living her own version of the misunderstood friendly neighbourhood costumed crime-fighter archetype. It reunites the creative team who collaborated for her first appearance on the page and flawlessly continues her trajectory in her own direction. While providing a new twist on familiar characters from older Spider-Man tales, everything about this Spider-Woman is positively invigorating. Extrapolating from a particularly clever “what if” has made for some highly enjoyable reading.

Some might attribute the warm reception Spider-Gwen has received in part to the fact that she’s never threatened to replace Peter Parker. I think it’s more directly a result of finding a truly amazing way to breathe new life into one of the best-known superheroes in comics – staying true to the idea of an adolescent with great power and great responsibility, but giving most of the other details a seriously sassy shake-up. That’s music to my ears.