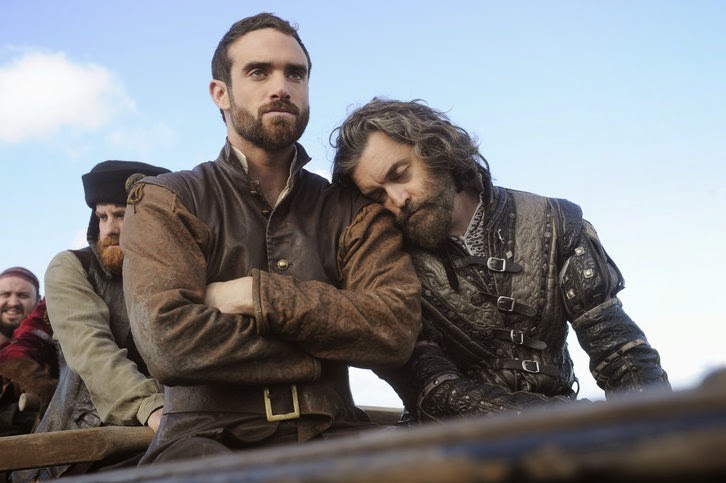 ABC’s wonderfully weird musical comedy has wrapped up its first season. It’s unclear if it will be renewed – although it should. Galavant might not have been a smash ratings hit (and with how niche of a show it is, and the fact it was aired Sunday nights during the traditional winter hiatus period, did anyone really expect it to be?) but it was something unique, and more than that, it was well done. The showrunners delivered a smart finale that wrapped up the main storylines in unexpected ways, and set up a potential second season, if there is to be a Season 2. (Spoilers ahead).

One of my favorite things about Galavant is how many of the characters unexpectedly interact with each other. Some shows get stuck with having the same characters interact with each other over and over again and never change the group dynamics. For having only eight episodes, and considering how physically distant its characters were, Galavant did a good job mixing it up. Sid and the Jester? Sure, they can be friends now. Henchman Gareth and the Chef? Of course they have a low key friendship. Not to mention, season 1 was all about Galavant and King Richard wanting to kill each other in a battle for Queen Madalena’s affections. Then in the last episode, they got drunk and bonded over the fact that ugh, Madalena is the worst. (Their words, but it’s true). And if there is a season 2, the cast will be completely scrambled, with Galavant and the King fleeing the kingdom, Gareth and Madalena now allies with Sid as hostage, and Isabella and the rest of the main cast at her cousin’s place. It’s a bold choice that works because the writers and cast know their characters well, and have made them individually distinct and entertaining.

Breaking the main cast into unexpected pairings was just one way Galavant stayed fresh. It also had some consistently great guest stars. John Stamos as a snooty knight. Ricky Gervais as a spiritual guide (he wasn’t legally allowed to call himself a magician). Anthony Head as Galavant’s emotionally constipated dad. And my favorite – Weird Al as a singing monk. Those are just some of the great guest stars the show was able to lure on. And they all seemed to be having a blast.

And why wouldn’t they? Galavant embraced its weirdness and ridiculousness. It didn’t always have to make sense, because it was always a lot of fun. The songs were hilarious- even (and especially) the love songs. Galavant made a lot of bold choices which usually, but didn’t always pay off. There was more toilet humor than was strictly necessary, although maybe that was for kids watching who wouldn’t get all the jokes in the songs.

There was also one obnoxious gag where the characters got annoyed when another character (usually Galavant) broke into song. It was funny once or twice, but after it happened a few times in several consecutive episodes, it felt like the show was bashing its own genre. Since Galavant owned pretty much everything else about itself, no matter how outlandish, it should have also embraced the musical component. This self-awareness was slightly redeemed when the characters wondered in the final song if the all the singing would kill their Nielsen’s ratings. Which is actually a fair question. But it’s a question that would have been evident during the entire process. It felt like Galavant was trying to pull some ‘psh, yeah, I like that thing, but only ironically’ nonsense. Irony worked well in other aspects of this medieval musical comedy, but pretending it’s too cool for its own genre got old pretty quickly. It was like the show was afraid people would think it was too out there, so it made fun of itself as a safety net.

On another show, that would be less obvious. But for a show that is otherwise confident in all it’s other out-there choices, it felt like a slight disservice. If Galavant gets renewed (fingers and toes crossed), my biggest wish is it fully and wholeheartedly accepts itself as the weird hilarious show that it is. That, and possibly a longer episode count.