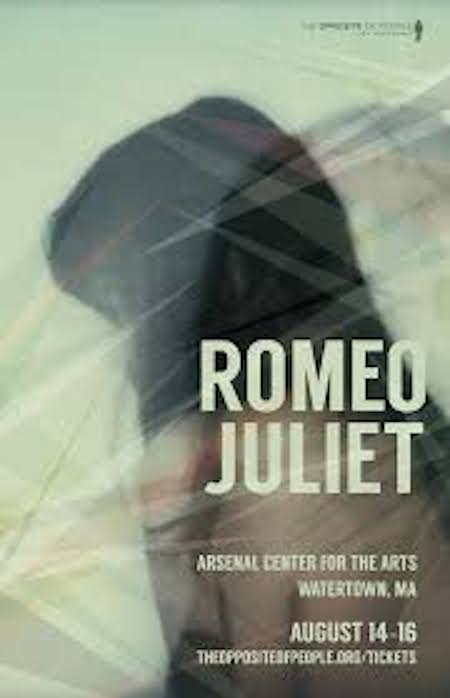 Romeo & Juliet Can Live, the Shakespeare Text Must Die

Dystopia is all the rage these days, as any of the recent hits in YA fiction/blockbuster film adaptations will indicate (The Hunger Games; Ender’s Game; The Giver, etc.). The Boston fringe theatre scene is no exception, and companies can choose to either stage new works (e.g. Flat Earth Theatre’s What Once We Felt) or give a classic work a dystopian make-over (Pygmalion, by the same company). The Opposite of People (TOP), a new theatre company, decided to give this popular, pessimistic, post-apocalyptic spin to the well-worn story of Shakespeare’s Romeo and Juliet. Aside from a no-frills, hostile, rough-hewn set (set design by Cara Guappone), sturdy leather-based costumes evocative of The Matrix (excellently designed by Daniel Sullivan), a phantom character, and a twist ending, this RJ, directed by Stephen Sacchetti, seemed pretty straightforward. Unfortunately, with a couple of notable exceptions, Shakespeare’s text did not come alive in this production; poor line-readings and irregular stage combat made for a long night at the Arsenal Center Black Box.

If you had no program, and chose to ignore the posters lining the back wall with ominous messages like “Be a Good Citizen,” “Infection,” and “Quarantine,” there would not be much to indicate what made this production dystopian. We are still treated to the classic tale of two warring households in Verona hosting the budding romance and death of a young, rebellious couple. Some of the performances in this production were acceptable, while others were strikingly good or bad. Sadly, most of the actors in this production were not convincing in their knowledge or comfort with the early modern text.

Katie Higgins’ Nurse was the first of the performers to actually talk like a human. Everyone knows the Nurse is one of the funnest and funniest characters in the play, and Higgins does not disappoint in her voluptuous and unusually dark rendition of Juliet’s nanny.

I was also intrigued by the female casting of Mercutio (Kristie Norris). Norris’ shrill, giggly, lithe, foxlike Mercutio was an interesting shift away from the usual pelvic-thrusting, macho meathead Mercutio of many an amateur production. Unfortunately, Norris seemed so caught up in performing the hell out of each line that I had trouble retaining the meaning of words. Less is often more, when it comes to such signature roles.

Nothing, however could prepare me for the performance of one of our eponymous characters. Sacchetti’s self-directed Romeo committed the worst poetic atrocities of the production. He spoke every line speedily and at a consistent pace, seemingly deaf to the iambic rhythms, swallowing meaning with every dutiful recitation. No sentence was mouthed without sounding like it was lifted from a nursery rhyme. While Sacchetti was nimble in physicality and bright in energy, I found it very hard to hear his rendition of Romeo’s romantic advances.

It was also not very satisfying to see him perform opposite Cara Guappone’s fidgety Juliet. While there was plenty of smooching, I didn’t see much convincing romance between the two love birds. This rendition seemed to confirm the oft-cited cliché that the romance in RJ is unplayable; how can anyone fall so intensely in love in so short a time? Of course, we know that cliché is hogwash in the hands of the right performers/directors. No such luck here.

I was offered one shining life raft, however. By far the best performance of the evening was offered by Shira Cahn-Lipman as Friar Laurence. Cahn-Lipman managed to catch the cadences of the text while performing dynamically. Her main speeches were fantastic; she demonstrated a clear knowledge of where to pause, where to rise, and where to emphasize. The female Friar was compelling in her steadfast devotion to the impetuous lovers, and she played a key role in the twist ending that made it believable and interesting. Based on what I witnessed in this show, I would happily watch Cahn-Lipman in any role, and look forward to keeping an eye out for her in other local productions.

Sadly, even this performance couldn’t make up for the clunky stage combat that grew messier and messier as the show went on (fight choreography by Jake Waxman). While Mercutio’s fatal stabbing was exciting and subtle, the same could not be said for Tybalt’s (Taylor Faulstich) blood-smeared death. Less is also more when it comes to combat, and I found the single blows (Capulet’s (Zair Silva) slap, Mercutio’s stabbing) more effective than the extended fight scenes.

But I can forgive the show’s shaky combat over the tired meta-narrative shaped by the presence of a small child (Genevieve McCarthy) ghosting throughout various scenes of the production. Spoiler alert: in this new iteration of RJ, the lovers live, and the small child reciting lines along with some of the characters is the fruit of their requited love. Gimmicky at best, annoying at worst.

Romeo and Juliet is usually a crowd-pleaser, but it isn’t enough to choose a popular Shakespeare play, pick some cool staging-concept, charge for the benefit of seeing it, and hope for the best. Having performed in such productions, I can confirm from painful personal experience that no one wins when so little dramaturgical thought is put in. Hopefully, future fringe productions will focus more on line-readings, the foundation of any Shakespeare performance, over eye-catching staging ideas or reinventions of “timeless” tales.