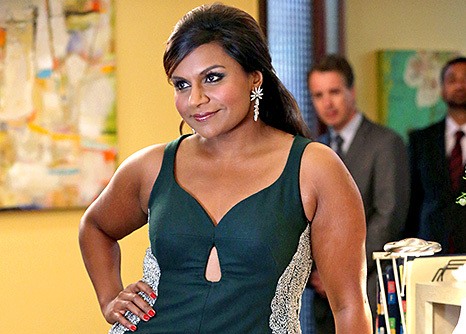 How great has The Mindy Project been this season? Seriously. It’s settled down into the actuality of the Mindy + Danny relationship with aplomb. They’ve even managed to eke out a bit of a workplace comedy vibe – using the considerable talents of Adam Pally (as Peter) to amp up everyone else from dragging supporting player to real occasionally comedic force.

But that Christmas episode was a disappointment. Christmas episodes are designed around big moments, especially for characters in relationships. It’s all the pressure to make this a big defining moment in the season. And since this season has been all about Mindy + Danny (to its great benefit!), that meant the Christmas episode was building towards a climax in their solid coupleship.

One of the least compelling parts of Mindy’s character, for me, has always been the comedic insistence that all she cares about in this life is getting herself hitched. For one thing, it just doesn’t fit with a woman who used to get so mad about being pushed out of the leadership positions of her office – or who managed to get through med school in the first place. But for another, it offsets the cool, sex-positive vibe of Mindy. On sitcoms, especially Romantic Sitcoms, relationships sometimes move exceedingly fast – see also Mindy ending season 1 engaged to a guy she didn’t start dating until the end of the season. But when the will they/wont they definitely becomes they will – it’s a smart move to slow shit down. This relationship is for real, not just a drama machine.

And so I don’t particularly like the direction the show is going, pushing Danny closer to an engagement built on a tidal wave of Mindy’s rushed frustration. These guys are the end game, so let’s enjoy them getting there.

And Danny is at his worst, by far, when he’s belittling Mindy’s dreams. It’s cute when he belittles her obsession with reality television or other foibles. But when he’s doing it to her dreams of furthering her profession, it’s lame. I know that’s the point (I’m not an idiot), but it doesn’t look good on Danny.

All that said, this show is getting extremely funny. I really like the way that Julia Stiles’ energy contrasts with the mania that is Morgan Tookers. The first half of this season has been some of the best work that the show has ever done. I’m hoping that the show wont fall down the sitcom rabbit hole of allowing characters in a relationship to vacillate their character wildly based on the demands of conflict in story telling.

Mindy and Danny together already creates enough conflict – and adding in Rhea Perlman as Danny’s perfectly cast mother more or less guarantees it. There’s no need to make shit up.