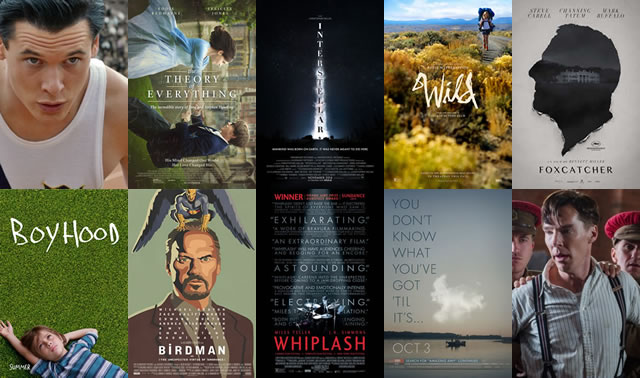 Now that most of the critics groups have had their say, through awards and top ten lists, and the Screen Actor’s Guild (SAG), and Golden Globe Nominations have been announced, its time to get in some updated Oscar predictions before the end of the year.

I’m working off a moderately outdated list, because the last time I gathered my thoughts or predictions in published form was back on September 19. Ironically I think I was pretty astute, and there are only a few changes I am going to make, but here it goes!

For some reason I had Foxcatcher in the number one spot, that seemed like a strong bet at the time, and even with three Golden Globe nominations, I think this is a film that will get snubbed by the Academy, I dropped it out of my top nine. I also dropped Wild and Interstellar out of my top nine, the rest stay.

Two films entering my predictions are Selma, and Whiplash. I think these are two films that will be well received, and they have tremendous impact.

I would love to see Bennett Miller recognized for Foxcatcher his direction is visionary, but he and James Marsh were bumped from my top five.

Wes Anderson may finally get some recognition from this group, many people are not predicting him, but I think based on the likeability of this film within SAG, and at the Globes he is in! Ava DuVerney for Selma will also make the cut.

I kept Fincher in my top five, but he may be vulnerable to the Weinstein Co.’s push for Imitation Game director Morton Tyldum.

Foxcatcher is bumped again! Jake Gyllenhaal is the new man on the list, and with nominations at SAG and the GG he looks unstoppable. I know Carell has this too, but he was snubbed by the Broadcast Film Critics, which are good predictors of the acting races.

I know betting against Aniston may not be a smart move here, but I think Harvey will back a play for Cotillard to get a nomination here. I will re-visit this.

Keeping this list the same, for the moment, may switch Wilkinson with DuVall for The Judge, the Academy loves crap like that.

Sorry folks, Dern is out, I also must have been obsessed with Foxcatcher because I had Redgrave in the fifth spot.

There is Jessica Chastain fever; she will be an Oscar nominee for A Most Violent Year. Streep will also be nominated for Into the Woods, musicals tend to get a token Supporting Actress nomination, even when the Academy is not gaga for the film.