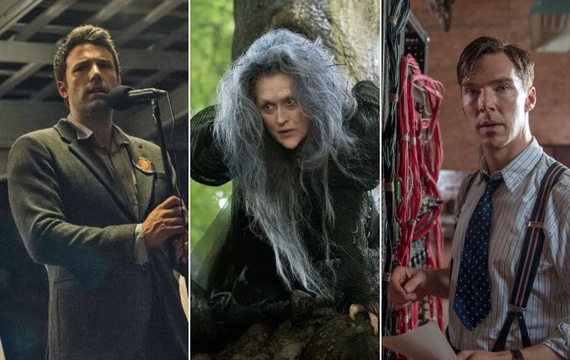 I know what you are thinking, yes its only September, but with festival circuit in full swing, Telluride, Venice, and Toronto, it’s time to start talking about and predicting this year’s Oscar contenders. I have held back as long as I can.

The earliest “serious” contender came from the Cannes Film Festival, Bennett Miller’s Foxcatcher starring Steve Carell, Channing Tatum, and Mark Ruffalo. Miller has directed two films to Best Picture nominations in the last 10 years, Capote (2005), Moneyball (2011); he was nominated for Best Director for Capote. Foxcatcher came out strong at Cannes, and Miller won the Best Direction award, an early sign that this film would be one of the films that would and could make it to the Oscar race. Along with citations for the film, the three male actors, who are central to the story, earned rave reviews, mainly Carell who was singled out for breaking the mold of his traditional style of acting. This strong buzz has continued throughout the festival season.

Boyhood came next, and with a 100 on metacritic, this film is likely to earn Richard Linklater his first nomination outside of the writing category. I saw Boyhood at an early screening with Patricia Arquette, and Ellar Coltrane, their passion was infectious, and I think this will have a tremendous impact on Academy voters. The voting body is largely male, and I think they will relate to the 12 year journey. I also think many women will relate to the Arquette character who goes through her own journey of motherhood, being a wife, being a professor, it’s just as rich of a journey.

Birdman exploded at Telluride, and with the talented Michael Keaton at the center of this film, I think you can expect a lot of awards traction. Keaton is one of those talented performers who got ditched on the side of the road in the mid-90s, but has made some great supporting turns in recent years, like The Other Guys. Keaton is the front runner in the Best Actor category, for me right now. Birdman was directed by two Oscar nominee, Alejandro González Iñárritu. González Iñárritu was nominated as a producer and director for Babel (2007). González Iñárritu is also well known for his award winning films Amores Perros (2001), and 21 Grams (2003).

There are two breakout female stars in this Oscar season, Reese Witherspoon, and Julianne Moore. Reese Witherspoon has two strong performances from Telluride and Toronto, A Good Lie and Wild. I think she is guaranteed a nomination in her “comeback” for Wild, which was directed by Jean-Marc Vallet, who directed Dallas Buyers Club. There has been a strong push to get Julianne Moore her first Oscar, that’s right folks she has never won, in my book she should have two, one for Boogie Nights, and one for Far from Heaven. Moore won Best Actress at Cannes for Maps to the Stars, but the distributor stated that they would not be campaigning for the Oscar; eventually they did say they would campaign for BAFTA, and the Golden Globes, but no Oscars. In one word, weird. Moore’s other big film Still Alice, about a woman with early onset Alzheimer’s got picked up by Sony, and they are going to push for the Oscar, with the social media buzz she has stepped up to the plate as the front runner.

Two other films that made strong showings at Toronto and Telluride were The Imitation Game, and The Theory of Everything. This year’s Oscar Awards looked bleak, but these two films have the bio-pic sheen that wins Oscars. Imitation stars it-guy Benedict Cumberbatch who plays Alan Turring, who cracked the Enigma Code during World War II, Turing was gay as well. Everything stars Eddie Redmayne as Stephen Hawking, and his adapted from Jane Hawking’s book. The film follows their love story, and what it means to care for someone with a physical impairment. On the surface, without seeing this film, it fits the A Beautiful Mind formula. I think these are two films will also do well with nominations, so stay tuned.
In the end its only September, but here are my predictions so far: