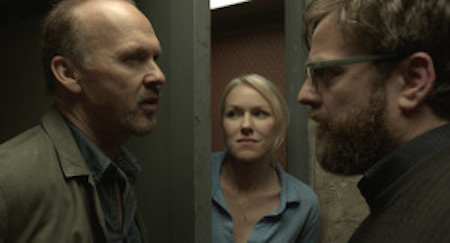 Somewhere in a high tower I imagine Harvey Weinstein is looking into a cauldron, and cackling. The Weinstein Company did exceptionally well today, their film The Imitation Game has 3, including Best Ensemble, Actor (Benedict Cumberbatch), and Supporting Actress (Keira Knightly).

I make this joke because Harvey just has a way of making these types of films happen during the award season, although that was not the case last year. Somehow Harvey got voters to nominate Naomi Watts in Supporting for St. Vincent instead of Birdman.

That did not stop Birdman as the highest nominated film for this award show with 4 nominations, including Ensemble, Lead Actor (Michael Keaton), Supporting Actor (Edward Norton), and Supporting Actress (Emma Stone).

Watts nomination was not the only surprise. Jennifer Aniston’s Lead Actress nomination came out of the clear blue, it’s a performance I know she has been talking up, but no one else had been talking much about her. The other surprise was Jake Gyllenhaal’s nomination for Nightcrawler, this is a great performance, and I hope he gets a Globe nod too tomorrow. Many will say Duvall was a surprise in Supporting Actor, but he has won his category before, and been nominated as individual performer 5 other times, pretty predictable.

In the ensemble category the biggest surprise was The Grand Budapest Hotel nomination, it surely replaced Into the Woods as “we have a lot of stars” but earned this nomination, and was huge treat. Wes Anderson always has great casts, but this is his first film nominated in this category.

The fifth slot in this ensemble category was a toss-up, I had Selma, but like true Americans they had a hard on for a story about a British genius, The Theory of Everything. This is the film to watch out for, not Imitation Game, by the way!

So what does this mean for Oscar? This is the first of the guild nominations, and can be a good predictor. Aside from the category analysis the SAG Awards have become less reliable in the last few years, with nominations, namely because if the voting body did not get the screener they did not vote for it. This is why you see a lack of Selma, Unbroken, and other late release films, so keep that in mind. There is an analysis under every nominated category below:

3 of these men have Oscar nominations, Keaton, Cumberbatch, and Redmayne. Carell and Gyllenhaal are vulnerable still, but this could be the final five. Watch out for Timothy Spall in Mr. Turner and David Oyelowo in Selma. I think Oyelowo will replace someone.

Aniston threw me, I was half expecting Amy Adams, for Big Eyes or Hilary Swank for The Homesman. I am not sure what to make of Aniston’s nomination at the moment, I do not think she will make the final five at Oscar, I think Marion Cotillard will replace her.

This could be the final five at the Oscars, but Duvall is vulnerable. Watch out for Josh Brolin for Inherent Vice, Tom Wilkinson in Selma, and a few others.

Outstanding Performance by a Female Actor in a Supporting Role
Patricia Arquette as Olivia – “Boyhood”
Keira Knightly as Joan Clarke – “The Imitation Game ”
Emma Stone as Sam – “Birdman”
Meryl Streep as The Witch – “Into the Woods”
Naomi Watts as Daka – “St. Vincent”

Watts like her Australian counterpart Nicole Kidman in The Paperboy will not be nominated for the Oscar; she will most likely be replaced by Jessica Chastain, for A Most Violent Year, which the group had not seen. Watts could also score a nomination for Birdman over Stone.

These five films could be Oscar nominees, I think four are safe bets. If Grand Budapest gets this, and a PGA, it’s on even further solid ground. Since no Wes Anderson film has gotten a nomination at SAG, I would add it to your Oscar top 9.