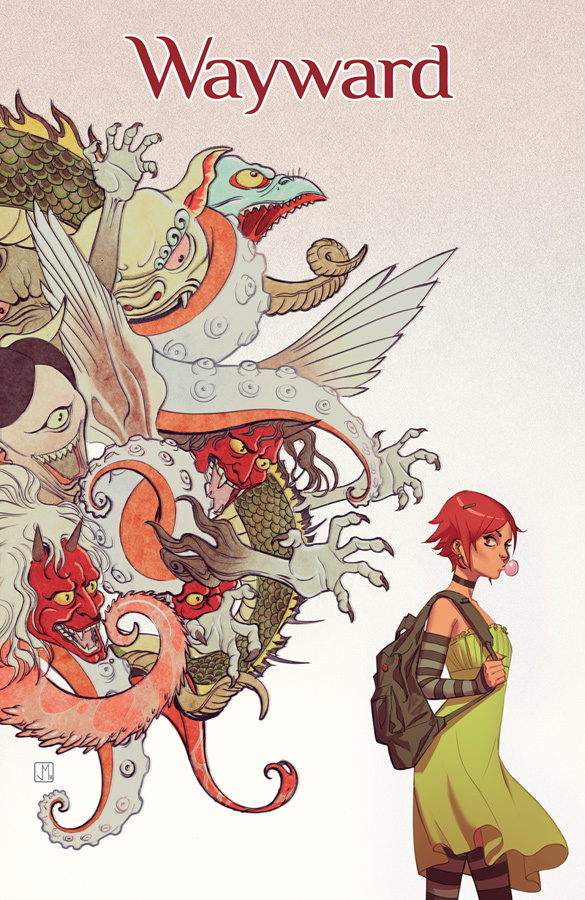 Getting Waylaid By Wayward

It’s a shame that the perceived fast pace of life means so many new things get boiled down to X Meets Y. There’s certainly an argument to be made for having a quick answer to the frequently asked “So, what’s this new comic all about?” but the more new series I read, the more frustrated I get by interesting things lost in that simplification.

I have to admit that if you wanted a rapid-fire response from me about Wayward, I too would answer with something resembling “Buffy the Vampire Slayer meets Miyazaki”, but I wouldn’t want to leave it there. And, if you’re nice enough to keep reading, I won’t have to – cheers. Maybe part of my hesitation is a result of my currently being more familiar with episodes of Buffy than I ever have been(or likely ever will be again) and knowing very little of Miyazaki’s work, despite an interest in expanding my knowledge in that area.

Putting those two well-loved, highly complex and varied universes in an X Meets Y equation not only assumes the audience of such a statement agrees on the salient elements of each, but it also puts an unfathomable pressure on a five-issue-old comic book series. All of which is unfair. Particularly if the recipient of such an oversimplification is a terrible person who doesn’t enjoy anything created by Joss Whedon or Miyazaki. Is terrible too strong a word? Improbably. But even such a lost soul may enjoy Wayward for its many distinct merits.

With Wayward #5, the series’ prologue ends in a dramatic(shocking, even) fashion. The first arc of the story, written by Jim Zub, introduces readers to Rori Lane, a young woman acclimating herself to both a new life in Japan and a mysterious power she possesses. Along this path of discovery, she meets other young people, each of whom also has a unique power. This is one of the areas where drawing comparisons to Buffy makes a lot of sense. While Whedon’s world is steeped in European stories of supernatural phenomena, this Zubiverse takes its cues from Asian folklore. Particularly delightful in the single issues(though, sadly, not being included in the trade paperback of this arc) are essays by Zack Davisson that provide informative details about Japanese culture and mythology. But even without supplemental data, the ensemble of characters become engaging as soon as they are introduced and I’m excited for each one to become further developed as the series continues. That way I can eventually have passionate conversations about my favourites.

Much like Rori’s own cultural pedigree – an Irish father and a Japanese mother – the art of Steve Cummings feels like a blend of the styles of Western and Eastern comics. I’ve only recently started reading manga and am getting over some of my artistic culture shock, but the Japanese influence in the visual elements of Wayward anchors the location’s authenticity. And, despite being unfamiliar with the nature of the creatures Rori and her comrades face, their visual interpretation ensures no aspect of their menace nor threat is lost in translation. The colour palate of the series, as originally established by Zub and John Rauch and expertly wielded in Wayward #5 by Tamra Bonvillain, makes many of those images very resonant.

After this strong start, I’m quite curious about where the series will go next. I’m hopeful that the concept is just familiar enough to make more readers like me(and you?) come along for the ride on the more fascinatingly exotic elements of the narrative. And, who knows, given time and enough of an audience, in the future I may be recommending a comic that people are describing as Wayward meets something-or-other… and I’ll be able to re-use this review. Now, that’s a win-win.