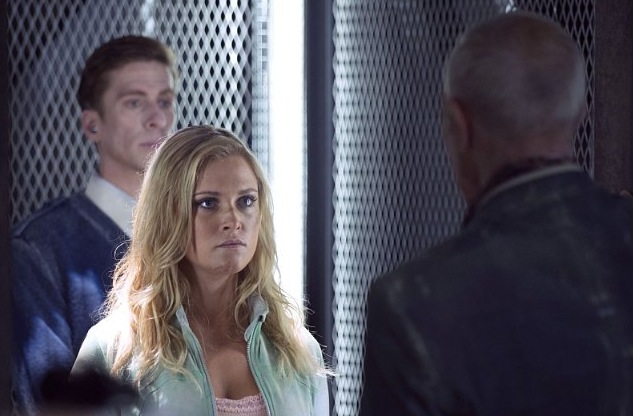 Who would have guessed the premiere I looked forward to most this season would be on the CW? Okay, that probably wouldn’t have been too difficult since anything with strong female leads and good-looking boys is kind of my thing. But beyond these important factors, the premiere of The 100 was so anticipated because of the crazy cliff-hanger at the end of the first season’s finale. Luckily, the second season’s premiere did not disappoint.

The show kicked off about twelve hours after the events of the finale. The lives of our favourite group of teen rebels were all in question when the premiere started. Last we saw, Finn and Bellamy were in the explosion that killed a lot of the grounders, and Clarke and Monty were in some white containment room. Clarke, not being one to not know all the details of everything ever, decided to break out of her cell and threaten a girl cleaning Monty’s room. She took her to the futures version of the great hall from Harry Potter, where a tribe of people were having a feast. The festivities quickly erupted when they saw Clarke, bloody from cutting her arm on the glass in her room, and yelled about contamination.

Turns out, all her friends, at least the ones the people of Mount Weather found, were safe inside the hall. Clarke was next to be “decontaminated” until she went all Girl, Interrupted on, Maya, the cleaning girl. Clarke meets President Wallace, who reassures her that they are safe inside Mount Weather. But Clarke’s paranoid and tries to escape, and almost gets outside before Jasper warns her that if she opens the door to outside, the people inside will be killed. They were never exposed to the radiation like the grounders, or the 100 who were so close to the sun, they’re used to the radiation. It’s TV science, so we’ll let them get away with it.

On the outside, Bellamy and Finn are found alive! Not that I was too worried, but wouldn’t that be a bold move for the show to make? A grounder captures Finn, and Bellamy and some other of the 100 try to rescue him, but fail miserably. Luckily, Kane and Abby and the rest of the sky people appear and save the 100. Kane decides that he’s still in charge on the ground and treats the boys like prisoners, arresting Bellamy and taking the boys the drop ship, newly title Camp Jaha.

Back in space, Jaha sits trying to make communication with the people on the ground. The only thing he hears is static until a cry comes from within the ship. A baby? What kind of monster leaves a baby on the ship when everyone else is going to the ground? There isn’t a population issue on the ground, I’m sure you could have brought your baby with you, whoever you are.

I guess we’ll have to wait till next week to see whom the baby-leaving monster is. And find out if Mount Weather is evil. And wait for the 100 to reconnect. So many questions already. The premiere has set us up for a great looking season.