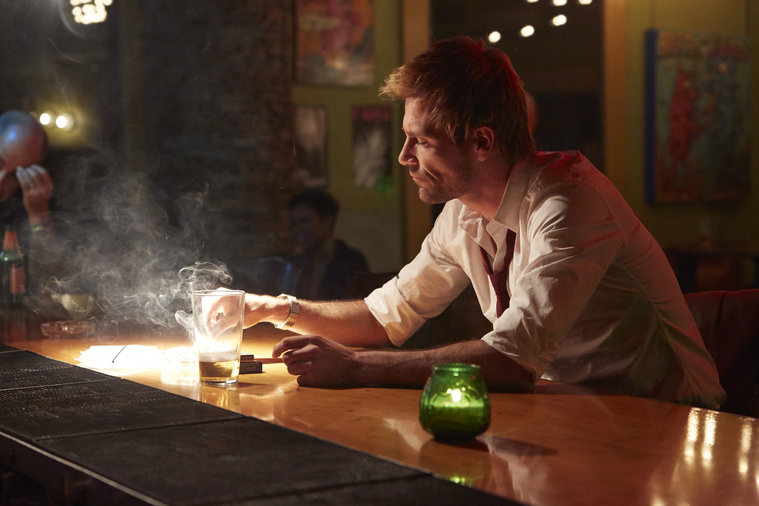 NBC has joined the comic book adaptation race on TV with its new show Constantine. Let me preface this review by saying I have not read the Constantine comics or seen the movie, so I didn’t incorporate any external knowledge about the source material into my viewing experience.

Unlike the other comic book offerings that are airing, Constantine isn’t a super hero in the classic sense. Instead he’s a demon hunter and self-proclaimed (and self-deprecating) master of the dark arts. And he just happens to be damned to hell for events that happened before the series started. (Events that will almost certainly be revisited. More on that later). A lot of the action of the show features the supernatural, including a lot of classic possession shots: contorted and spasming limbs, eyes that are glazed over completely black or white, and creepy facial expressions. The show was spooky, but didn’t use any gratuitous gore to achieve this.

While the supernatural demons/possession angle is something that has been explored a lot, Constantine has the potential to offer a fun new take on it. The biggest problem with the show’s mythology is that Constantine himself is a demon expert, but the audience is not. Add on top of that that Constantine is stoic, and when he does talk, a lot of his lines are snark, it separates the audience from the story. The obvious solution was Liv (Lucy Griffiths), the daughter of one of Constantine’s dead colleagues who he spent the pilot episode protecting. Liv was clearly an audience stand in, she herself having no knowledge of the supernatural. While characters serving as audience surrogates is a very common tool in television, I would argue it’s an important one, when introducing a new world, and especially a new world with its own mythology. It’s done a lot, but there’s a reason for that.

Liv was a little underdeveloped, but there were signs she could expand into a well-rounded character of her own right. Sadly, Liv was cut after this first episode, so we’ll never know where her character was going. This presents the show with the challenge of helping the audience understand the universe. There is a character ‘Zed’ who will replace Liv as the lead, who (according to Google) is from the comics, but I don’t know enough (or anything) about the comic book character to speculate how well she’ll fit in.

I hope that whatever her role, she’ll be able to bring Constantine out of his shell more. While he has good reason to be wallowing and angsting (he caused a young girl to be damned to hell, he’s going to be damned to hell, his friend just died), Constantine spends a lot of time stewing in his own misery. Sure he has allies, and one friend (who is even more taciturn than he is), but he’s a bit of a loner by nature. He actually actively tries to shut out other people. That could be interesting in comic book form, but for a TV show, it makes him a very distant protagonist. Constantine could be someone you could root for, but they need to expand his character beyond ‘tortured loner with penchant for alcohol and one snark’. This type of male protagonist has been done before, and many times, it’s the supporting cast that is often responsible for drawing out other aspects to their character to make them three-dimensional. Matt Ryan has the whole ‘stoic, I’m covering up my pain with dark humor’ type down. It’s just not clear if the supporting character will help make Constantine more accessible to the audience.

In this case, it’s a ‘wait and see’ situation, because a lot of the pilot was spent on the relationship between Constantine and a character who is no longer on the show, so the other characters didn’t get a whole lot of time to build a rapport with Constantine. The pilot was entertaining, but not especially gripping. But the creators wanted to take the show in a different direction (hence cutting Liv), so this first episode probably isn’t a fair representation of the future of the show. The show has a lot of potential to strengthen its strong foundation. Personally, I think it deserves an episode or two more to find its footing. It could be worth the wait.