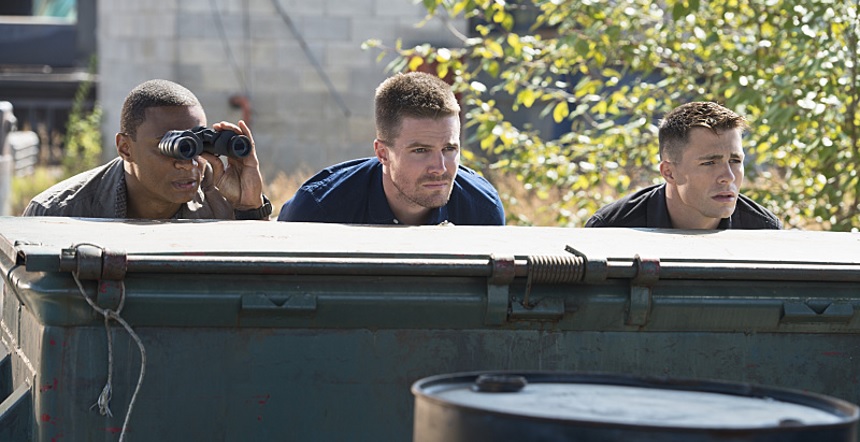 Arrow: The Return of Thea Queen

I realized yesterday during my busy return to work, that I had been remiss in my Arrow re-caps. After three weeks the show slowed down a little, but the one two from weeks one and two were enough to set the groundwork for the shows major arc, the mystery of who killed Sarah.

Where has Thea Been?

Thea Queen was not in either of the first two episodes this season, in fact the last time we saw her she was getting in a limo with her biological father Malcolm Merlin.

This week’s episode steered away from the hunt for Laurel’s killer, but rather focused on Oliver’s hunt for his sister. Using help from Diggle, his wife, and Amanda Waller from Argus, Oliver tracked Thea down in Corto Maltese. Throughout all this time via flashback, we learn Malcolm has been training to be an intense fighter like him.

While on this mission Ray tagged along, and tried to provide Thea with the space he thought she needed, but it Oliver’s brutal honesty that made her change her mind to leave with team Arrow. I do not expect Mr. Merlin to let this be so easy.

In the end Thea’s return, and her departure from Malcolm felt a bit rushed. I did not want to see a big struggle play out, but I wanted to see more about what happened to her, while in Corto Maltese. I imagine we will.

Laurel is still on the Hunt

While everyone was away trying to find, helping Argus track someone else down, Laurel was back in Starling City eventually getting the crap kicked out of her.

Laurel is torn about telling her father about Sarah’s demise; she also declared that this week she wanted to be trained to become the new Black Canary, which everyone has predicted would happen, at least everyone I know. Oliver said No, but Laurel met a man at kick boxing ring on her way to try and help a victim who’s husband beat her. At the end Laurel found her new trainer, it will be interesting to watch her character develop further.

Felicity finally took the offer to work for Ray Palmer, played by Brandon Routh, who was once Superman on the big screen, and is now back at Queen Consolidated in a much nicer office, Oliver’s old office.

Watching Felicity navigate team Arrow stuff and work in front of Ray was priceless. In the end it looked like Ray looked at some blue prints and there was some slightly ominous music playing, not sure why. Ray is playing Atom, from the DC comics, and to my knowledge he’s a good guy in the comics.