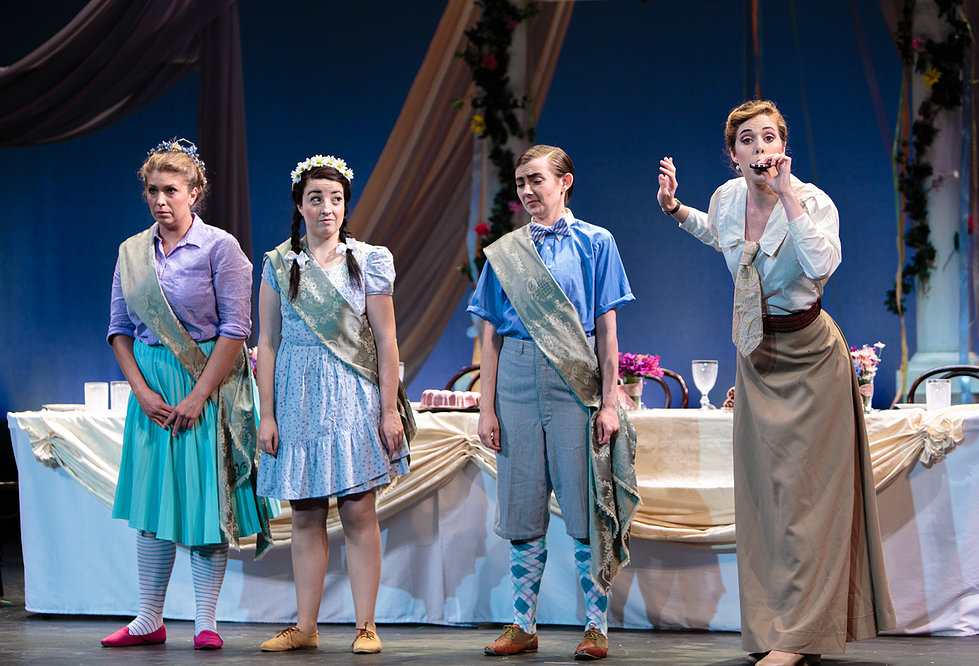 Albert Herring is Accessible Opera for All

Boston Opera Collaborative expands its repertoire by performing Benjamin Britten’s rarely-performed three-act opera Albert Herring at Dorchester’s Strand Theatre as a part of the Free for All Concert Fund. Directed and orchestrated by 2013 My Theatre (Boston) Award-winning Stage Director Katherine Carter, and Music Director and Conductor Andrew Altenbach, the accessible production is a treat for all ages, expertly sung in English and also including English supertitles. With clever staging and gorgeous vocal flourishes, Albert Herring was a charming chap for an afternoon at the theatre.

Britten’s odd-fellow-of-a-comic-opera begins with housekeeper Florence Pike (Erika Mitchell) raggedly preparing for her mistress Lady Billows’ (Allison Provaire) annual May Day festival. Mayor Upfold (Salvatore Atti); Superintendent Budd (Simon Dyer); Mr. Gedge, the Vicar (Thomas Middleton); and Miss Wordsworth (Jessica J. Jacobs) assemble to discuss with Lady Billows about the coveted position of the Queen of the May. Much to their chagrin, none of the proffered contestants are worthy of the honor (with hilarious commentary provided by Florence), until they consider nominating a King instead. And here, we are introduced to a description of the opera’s eponymous character.

Meanwhile, at the greengrocer, our “hero” (Zac Engle) is teased by his “friend” Sid (Jonathan Nussman) until Sid’s girlfriend Nancy (Heather Gallagher) enters to shop. Albert opines his lonely existence while Sid and Nancy share a tender moment. The May Festival Committee interrupts Albert’s reflection by announcing his appointment as the King of the May, much to Mrs. Herring’s (Kaitlin Berentshaw) delight. On the day of May Day Festival, Sid and Nancy try to help poor Albert by slipping some liquor in Albert’s lemonade glass, which has disastrous results for the tongue-tied and thirsty Albert during his required speech. Later that evening, Albert returns home, drunk and alone, where he overhears Sid and Nancy’s pity for him. Albert is inspired by this sympathy to seek a (drunken) adventure. When Albert does not appear in the morning, Mrs. Herring and the rest of the village fear the worst has happened to him, especially after finding his crown of flowers crushed by a cart. After a lengthy display of grief, Albert interrupts, detailing his drunken debauchery, and outraging the Festival Committee. He concludes by standing up to his controlling mother and inviting the village children into the greengrocer’s to shop to their delight.

The opera is surprisingly silly, but a delightful mix of morality and trivial. The opera doesn’t have the stereotypical operatic grandiosity, appealing to audiences of all ages. With English lyrics and dialogue, the opera is easily understood, and Carter brings modern sensibility to the opera’s action. From comic moments of trying to fit multiple people on the tiny couch or table (brilliant use of a set dressing), to the freedom of the village children’s movement and games (skillfully performed by Allesandra Cionco, Sarah Shechtman, and Malia Jane French), the opera comes alive as a village with much personality to appreciate during and between songs. This charm only takes the production so far, however. At its core, the opera features a derpy lead, which is only perpetuated by the casting of (and performance by) Engle as Albert. While Engle is talented enough, the titular character never sparkles or shines, despite the extensive material to create a sympathetic and worthy character. Under this deficit, the opera’s themes come off preachy rather than transcendent or engaging. The Festival Committee (Atti, Dyer, Jacobs, and Middleton) orchestrate some funny moments and perform their limited roles with comic and ironic delight, but they are too underutilized in Britten’s opera—Provaire’s overbearing Lady Billows thwarts instead of accentuates this specialty ensemble’s success.

Thankfully, Nussman’s Sid and Gallagher’s Nancy are an enchanting couple with rich voices to match their nuanced chemistry and performances—a spin-off musical about their relationship might yield better (and less preachy) results. They are brilliantly adorned and outfitted by Costume Designer Caitlin Cisek (2013 My Theatre (Boston) Award Nominee) with tastefully-designed and expertly-researched costumes. However, not all of the production excels under the same precise execution. Scenic Designer Shane Fuller does a thrilling job of using the Strand Theatre’s stage and space, creating a full greengrocer’s complete with gorgeous wood and space to play. The sets for each of the Acts become a cumbersome labor of effort, creating multiple intermissions and lengthy blackouts—the bane of an opera-goer and reviewer’s existence. Surprisingly, Carter directs this play without many of the directorial flourishes—so called “buttons,” which punctuate moments and scenes—for which she won accolades last summer for La Cenerentola. The drunken moments also lack precision and integrity, seeming to play for an uneducated and simpler audience accustomed to grandiose performance rather than the subtler (and more truthful) moments practiced by many of the opera’s other actors.

Combined, these minuses barely detract from the opera’s successes, but, instead, gave momentary pause and reflection. Britten’s Albert Herring was highly enjoyable and accessible opera, lead by the expert Carter and Altenbach, to comic success. They offer three productions in their 2014-2015 Season, including Fall 2014’s Italian Double-Bill La Canterina and Rita, by Joseph Haydn and Gaetano Donizetti, respectively; Spring 2015’s Werther (in Concert) by Jules Massenet; and Summer 2015’s Our Town by Ned Rorem. As Boston Opera Collaborative continues to bring accessible and professional opera to the Boston communities at an affordable cost, I hope that they continue to grow in their artistic integrity by fine-tuning their opportunities for improvement.