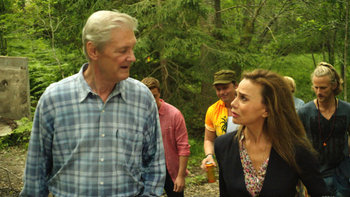 Season Wrap Up: Welcome to Sweden

Welcome to Sweden finished its first season on NBC with three episodes this past week titled “Breakups,” “Separate Lives,” and “Home,” and, of course, everything worked out in the end. But it was fun getting there. I really liked the last three episodes, which all had to do with each other. And of course Amy Poehler and Aubrey Plaza were back.

During “Breakups” Emma’s ex Marcus came in and, in Bruce’s perspective, ruined everything. He was perfect in Bruce’s eyes, though Emma wanted nothing to do with him. After talking with Bruce, though, Emma’s mom actually decided to break up with Emma’s dad and then Emma’s dad had a heart attack. Emma’s uncle, meanwhile, was having some love problems of his own. In the end Bruce continued with his and Emma’s planes to go back to America while Emma stayed behind broken hearted.

In “Separate Lives” Emma’s mom was trying to live it up and get all the experiences she never had while she was with Emma’s dad. Bruce, on the other hand, was struggling to fit in in America again, and Amy Poehler and Aubrey Plaza were right there to help him along, but it was no use. Emma, meanwhile, was doing all she could to get Marcus to see that she didn’t want to be with him. It all came to a head when she found a ring in her menu and she freaked out. It turned out, of course, that the ring wasn’t actually Marcus’.

In the season finale “Home” Bruce decided that he had to go back to Sweden and make things right with Emma after an awkward night with Aubrey Plaza. Back in Sweden, Emma and her brother were doing everything they could to get their parents back together. Ultimately her dad told her mom that he would sell his beloved summer house and that he would put in more of an effort with her and they had a classic reconciliation complete with Emma and her brother singing. Emma, who had been unable to reach Bruce this entire time, decided she had to go back to America to find him. They of course find each other at the airport and get back together.

Though the end of the first season of Welcome to Sweden was pretty predictable with everyone getting their happy endings, I thought these last three episodes were really well done and had some laugh out loud moments. I particularly liked Amy Poehler’s employee Pepe. And I loved how Bruce can’t really fit in anywhere. Overall I thought this was a really sweet, cute show and I think that season two will be even better.