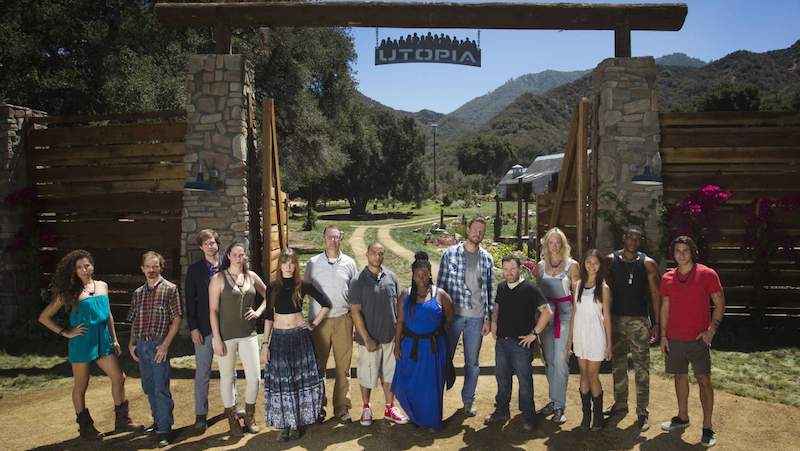 Utopia is easily the most anticipated new reality series of the fall season. As a multi-day series, Fox was gambling on this non-competition based show and they gave it three episodes during the premiere week. The premise is somewhat simple: a group of 14 Utopians arrive in a secluded land and are given limited funds to begin a new life. They get to choose what type, if any, government they have, they get to decide how to raise money for themselves, and they essentially create their own little society. Where the premiere week falters is in the inability to explain how new Utopians enter the society. We’re told that Utopians who are considered invaluable can be ousted from the series, and that new ones will arrive, but there isn’t much more info than that.

The first week unfolded and had more drama than any new show this year will likely have in its entire first season. Viewers were treated to: two hook ups, one medical evacuation (who later returned), a surprise pregnancy, more fights than I can count, sexual harassment, drunken debauchery, a trial, a separate group splitting off from the main group, and an individual choosing to live but then asking to come back to the game. And again, this is only week one.

As far as the Utopians’ themselves, many were given a bit of airtime but they were overshadowed by ex-convict Dave. This is a guy who is perpetuating stereotypes in the worst way possible. Going into the series, I was hoping the ex-con would be the one to really turn around and make a new name for himself, but Dave shattered those hopes within the first few minutes. All the Utopians were gathered together and had to decide which of their personal belongings to bring with them to the new Utopia. Dave stopped and watched as everyone got to work, and then blew up and demanded that all of his items come with them. He already was threatening to leave because he was told his items could come with him, and now he was being told that the group had to decide together on which items could make it (has he never seen reality tv before)? From there it was a downward spiral. Dave started a physical confrontation with Josh, who had been acting up in a drunken state, but Dave’s interference was about ten minutes after everything had calmed down. Throughout the next few days, Dave continued to fight with everyone until he sort-of separated from the group with his new friend hillbilly Red.

The editors, and Dave, tried really hard to make Dave’s story a redemption tale. While all his shenanigans play out, they would be followed by a conversation between him and preacher Jonathon. The preacher tried to work his biblical magic, and Dave tried to listen but ultimately the hot-headed ex-con left Utopia…and everyone literally had a dance party. Dave attempted to rejoin Utopia when he sent a letter pleading for an invitation back, or at the very least a baptism. The group voted and refused to let him stay, but did allow for the baptism. Dave’s partner-in-crime Red was hugely annoying and a bit of bully, but it seems that he’s calmed down since Dave left.

After three episodes, Dave was gone and things seemed to settle down a bit more. Kristen and Rhonda, two newcomers, entered the game and the current group was allowed to vote on which one would become the next Utopian. Rhonda is clearly another hot-head and a bit of a leader. Kristen seems more business savvy but young. I suspect the group will vote Kristen in, even though they really could use someone in the leader role.

The rest of the Utopians are fun to watch as well. While Dave stole the dramatic moments of the premiere week, Bella also had a fair share of screen time. Bella is a “doomsday prepper” (whatever that means) and is the go-to environmentalist/farmer. She’s essentially a huge hippy and her hippy-dippy ways paired with her tendency to micromanage are driving people nuts…but making the show very enjoyable to watch. Bella’s developing a comical infatuation with Josh, the contractor who was initially pegged as the “villain” of Utopia when he drunkenly harassed Hex and a few of the ladies. Josh is actually one of my favorite Utopians so far. He was put to trial and the group decided he could stay, despite his harassments, as long as he doesn’t drink for three months. Josh immediately underwent a 360, stopped being an asshole, and become one of the biggest helpers of the entire group (he was instrumental in them getting electricity and plumbing for the barn). My guess is that inevitably someone will need to step forward as a level-headed leader, and there’s a real possibility Josh could be in this role (as of now I’d say it’s between him or lawyer Mike).

I have to admit that I was a bit skeptical when watching the premiere week. Mainly, I was disgusted by the antics of Dave, confused by the “rules” of the show, and dumbfounded by the ridiculously stupid host (seriously…why is he even on here? And that mustache.). Furthermore, the premise of a non-competition based reality show would likely not keep my interest. After watching three episodes, I’m already hooked. I’m excited to see who steps forward as the leader of the group. I cannot wait to see if the group ever gets their act together and comes up with a business plan to make money. I’m eager to see who takes over as the villain now that Dave’s gone. It’s just a shame that the ratings are so low, because I think my faith in the series will last a bit longer than Fox’s.