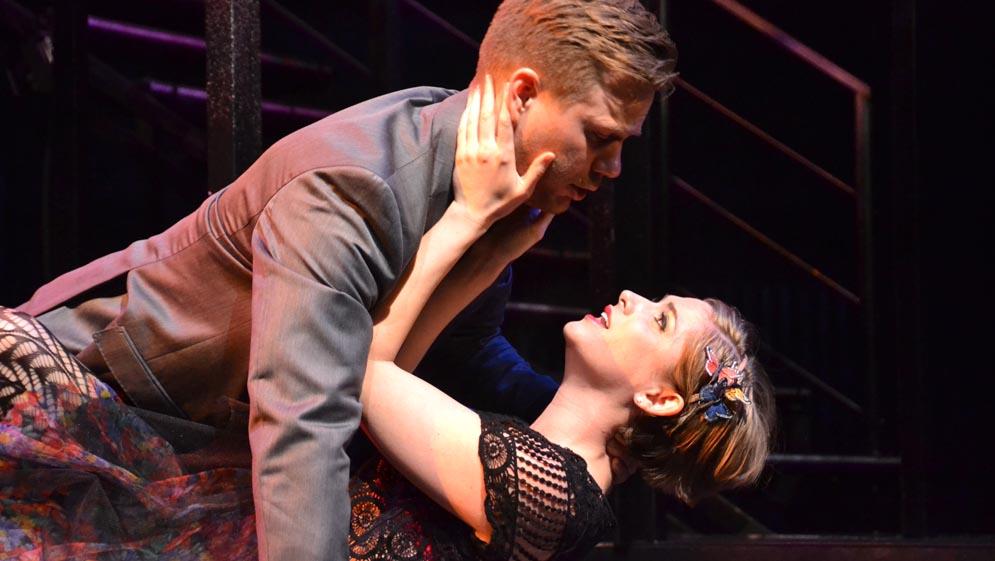 Don Giovanni is one of Wolfgang Amadeus Mozart’s most famous operas, spurring countless productions and re-imaginings in modern culture. Boston University College of Fine Arts’ School of Music Opera Institute and School of Theatre presented their own clever twist, thanks to the inspiring direction of Stage Director Daniel Pelzig and Conductor William Lumpkin. While the production’s youthful vibrancy and modern translation might have been off-putting and unsettling for a more classically-trained and -accustomed audience, the Gen-X edginess kept the opera production from feeling stale and trite, instead alive as the omnipresent influence of Mozart’s legendary antihero.

Don Giovanni opens with the eponymous character, played by the alluringly charming Isaac Bray, seducing Il Commendatore’s (James Demler, a Guest Faculty Artist) daughter, Donna Anna, played with some skill by Kelley Hollis. Don Giovanni’s servant, Leporello, played by humorous and wise-cracking Zack Rabin, holds watch until Donna Anna’s screams and cries wake her father, who challenges Don Giovanni to a duel. Don Giovanni easily wins, killing Il Commendatore, before escaping into the night with Leporello. Donna Anna returns with her fiancé, Don Ottavio, played by the wooden Heejae Kim, and she forces him to swear vengeance against the then-unknown murderer. Their duet feels uninspired and their relationship feels banal, lacking the necessary chemistry to fuel the play’s subsequent discoveries and action.

Next scene. We’re introduced to our real leading lady, the heartbroken but not broken Donna Elvira, played by the exceedingly talented actress and singer Audrey Hurley. Donna Elvira sings of her lost-love, who turns out to be none other than our dastardly antihero, Don Giovanni. They meet and flirt, not knowing each other’s true identities, before Don Giovanni flees and leaves his servant Leporello to mend the damage and wrath of Donna Elvira. Rabin’s most successful moments are in his “Madamina, il catalogo è questo,” in which he explains his master’s international conquests, much to our delight; for extra measure, Hurley matches Rabin’s comic success with her own agitated and vengeful actions and facial expressions. And here’s where things get interesting: Donna Elvira vows her own vengeance against the ne’er-do-well ex-lover.   The opera heats up with the introduction of our young ingénue, Zerlina, played with surprising emerging talent by Kelly Vigil, and her betrothed, the hunky Masetto, played by equally hunky but underutilized Benjamin Taylor. Don Giovanni arrives on the scene shortly after these two young lovers’ marriage, and, like any guy creeper, flirts with the wife; he attempts to seduce her until Donna Elvira arrives and thwarts his plans by leaving with Zerlina.

Our boring lovers-turned-detectives also arrive on the scene, and plead with Don Giovanni for help to find Il Commendatore’s murderer; Don Giovanni readily agrees to help, hoping to throw suspicion off his trail. The crazy Donna Elvira arrives AGAIN to thwart Don Giovanni’s plans (he really should get a restraining order against this bitch ex-lover), and she tries to convince anyone who will listen that Don Giovanni is a player. In one of the production’s best numbers, the four characters sing a quartet, “Non ti fidar, o misera”, as Don Giovanni counters Donna Elvira by trying to convince the clueless lovers that Donna Elvira is clearly insane. Unfortunately, Don Giovanni said too much, and Donna Anna recognizes him as her attempted rapist and successful murderer of her father.

Later, Don Giovanni hosts an elaborate party for all of the available lucky women in the surrounding areas, including Zerlina (who is joined by her jealous husband Masetto). Three masked guests arrive, singing of protection and vengeance (as usual, Hurley’s Donna Elvira was the only one to watch or listen to). Meanwhile, Don Giovanni attempts his seduction again, more forcefully taking Zerlina to an empty room to complete his deed, but the poor Masetto, along with the unmasked intruders, draw their weapons against our antihero. He escapes for now, until Act II.

Things get more interesting in Act II with comical switched identities between Don Giovanni and his servant Leporello to trick Donna Elvira and, thereafter, seduce her maid, played by the lovely Jennifer Jaroslavsky. They are interrupted by Masetto and company who are looking for Don Giovanni; Don Giovanni easily trumps their efforts and beats up the poor Masetto, leaving him in a Spanish gutter for his wife Zerlina to find and console him (in a beauty number, “Vedrai carino”). Meanwhile, Leporello has consoled Donna Elvira, including obtaining a marriage proposal, but they are interrupted by the silly pairs of lovers, who mistake Leporello for his master and vow to kill him. Unmasking himself and begging forgiveness, Leporello delivers one of his best moments in the aria “Ah pietà signori miei”, and manages to escape. He meets his master, who taunts him, but retribution takes the form of an ominous statue, which has its own words for the trickster: “Here am I waiting for revenge against the scoundrel who killed me.” Don Giovanni invites the statue to dinner.   There is another duet of love and devotion between our trembling Donna Anna and awkward Don Ottavio, before we get to the crux of the opera: the dinner scene. Donna Elvira arrives first and pleads for Don Giovanni to repent and change his ways, but he laughs at her; the statue is the next and last guest to arrive, sealing Don Giovanni’s doom. The opera ends on a happy, but preachy mood, with the two pairs of lovers and the jilted Donna Elvira arriving to see Don Giovanni and telling us through song about their next plans: Donna Anna and Don Ottavio agree to marry in a year (the girl has to mourn for her dead dad); Donna Elvira checks into a nuthouse convent; Masetto and Zerlina head home to dinner (oh yeah, that fits); and Leporello decides to find a new master. The entire ensemble sings the opera’s moral and we’re blissfully returned to D major.

The BU CFA’s Don Giovanni engages on multiple levels. Not only do Lumpkin and Pelzig assemble a talented group of emerging opera stars, they create a production, which excels on its compelling storytelling ability. The modern clothing, expertly and smartly designed by Leonard Choo, fits and accentuates each character perfectly, especially Donna Elvira’s gorgeous gowns and Don Giovanni’s flattering Italian suits. Andrea Nice’s scenic design is also a clever success; the framework of stairs and steel piping create an easily-moveable setting for the opera’s consistently moving action; the scenes flow seamlessly from house to streets with precision and little interruption. Some of Pelzig’s best direction occurs in the ensemble scenes, especially Don Giovanni’s palace during the party, allowing his ensemble of Gen-Xers to create vivid and memorable characters in the background. While the male ensemble rarely seem like a match for Isaac Bray’s charm (who wouldn’t go with him instead of the other options?), the female ensemble shine as a group of beauts, dancing and slinking around the stage with gorgeous sexuality and appeal. Lumpkin’s orchestra is a gorgeous symphony of sound, rarely overpowering the dynamic singers and bringing Mozart’s fun opera to euphonious fulfillment. The impressive depth of sound and expansive size of the orchestra support the singers throughout the lengthy opera.

And now my critique. Perhaps I am too modern of an opera critic to appreciate Mozart’s original opera, or perhaps I am too much of a neophyte to understand the historical significance of the Classical era. However, I felt annoyed by the opera’s preachy ending. The high-brow, moralistic conclusion brought the comic and supernatural opera to a disruptive and incongruously preachy juncture. We just witnessed our antihero, who was delightfully played by Bray, get dragged to hell and receive the just retribution that he deserves. The additional songs about how he deserves everything that he received was just too much. Let me, a somewhat intelligent audience member, draw my own assumptions and conclusions about the outcome. I don’t need you, pious ensemble member, dictating how I should react to this womanizer’s untimely demise.

Upon additional research, I found that some productions formerly chose to remove the finale, ending instead with the statue dragging Don Giovanni to the depths of hell. Many modern opera productions choose not to make this cut because Mozart’s original ends in D major, thus “resolving” the opera’s tonality and musicality; such artifice is lost on the modern audience and satisfies only the more musically-attuned listener. Let’s save the structure and syntax for the CD performance and leave the audience with the curiosity and wonder for which an unresolved and dynamic ending allows; the doors have closed on Don Giovanni and could have concluded on this opera in an ominous (and fulfilling) way.