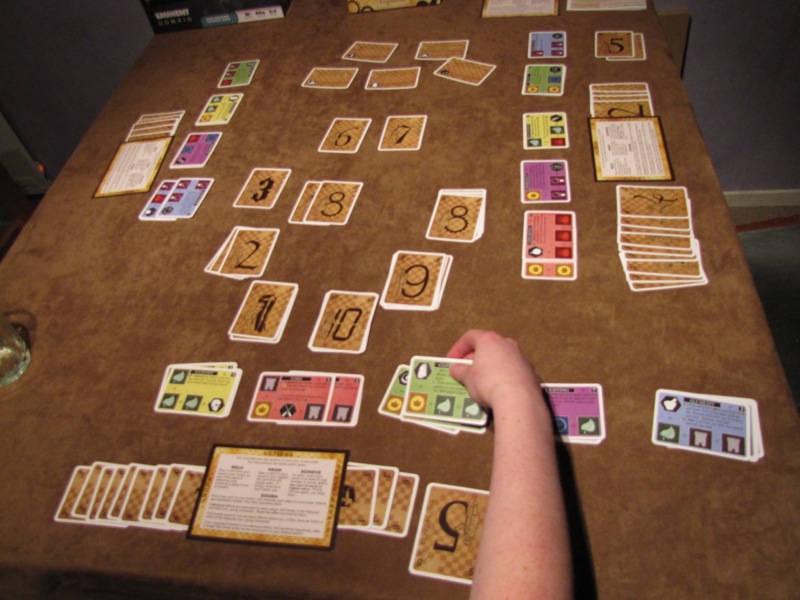 My Journey Through Innovation is a 2-Player Blast

My boyfriend and I went searching for a two-player board game last weekend.  We were fine with a game that catered to more players, but we wanted to be sure that we could entertain just the two of us for each round lasting between 30 minutes to 1 hour.  We stumbled across Eureka! in Coolidge Corner in Boston, an independent game store, complete with your indie favorite board games (you won’t find your grandfather’s Monopoly or your older brother’s Risk).  And that’s when we found Innovation.

Innovation follows humanity through the stages of man, from the wheel to paper to fission to the Internet.  Your goal is to acquire Achievements, either regular or Special, by scoring Points based on your Board.  Your Board is essentially the civilization that you create, as told through cards of—you guessed it—Innovations.  You start at the Age 1 cards; these cards detail the simplest innovations known to man.  As you play these cards on your Board, you build your civilization such that you can take higher numbered (more advanced) cards of innovations.

My partner-in-crime described why Innovation works: you are given four Actions on each turn, from which you can choose two (duplicates are allowed).  These Actions are: Draw (a self-explanatory but exciting term of picking up a new card from the highest-numbered pile on your Board, or available to be taken); Meld (a fancy but silly word for playing one of the cards in your hand onto your Board, thus advancing your civilization through new innovations); Dogma (another ridiculous term, which is also quite hard to turn into a verb—“For my second Action, I’m going to Dogma?”—but is the act of playing the effect of the innovation); and Achieve (where you use your Score Points to cash in for an Achievement Card).  While the rules get more difficult the longer that you play (and every game is incredibly different), the simple act of choosing two from four reduces the play to manageable and comprehensible logic.  The game invites strategy and concentration, but the basic rules require little thought or effort.  They allow even the most beginner board gamer to understand how to play the game.

Mastering Innovation proves much more difficult.  The challenge in Innovation is remembering that only Achievements matter at the end of the game (provided that the game does not end prematurely with one of the Innovation cards).  With 10 “Ages” and multiple colored cards to be played, you can focus too long on building a pretty Board while your opponent is hitting you with Fission (removes all cards currently in play, reducing all of the players to Prehistory).  Another challenge is keeping track of color-coded Icons, which trigger the Dogma effects; with a full table of even two players’ Board of Innovation cards, it’s easy to miscount, requiring constant stopping to re-count how many “green leaves” you still have present on your Board, compared with your opinion).

And here’s my only criticism: the game seems to last far longer than anticipated and exceeds the Innovation Rules of Play’s suggested time limit (30 to 60 minutes).  Despite multiple games, my competitor and I couldn’t seem to reduce our time below 1 hour.  Perhaps a 2-player game of Innovation takes longer, with the 3 to 4-player taking only 30 minutes to complete.  I doubt it, however; much of the time is wasted reading the individual Innovation cards to understand the Dogma effects, counting the number of Icons on your and your opponents’ cards on their Boards, and strategizing your next Actions.  With all of these different considerations, it’s no wonder that Innovation is suggested for ages 14+.

While I played with only one opponent, up to four players may enjoy Innovation, and the additional competition would only add to the complexity.  I look forward to teaching my friends what it means to Create Paper.  Even with these aforementioned struggles, the game is a wonder to play, amusing for hours of innovative play, as each round changes the story as you and your opponents race through history.  I won’t be racing to return this well-found treasure any time soon.