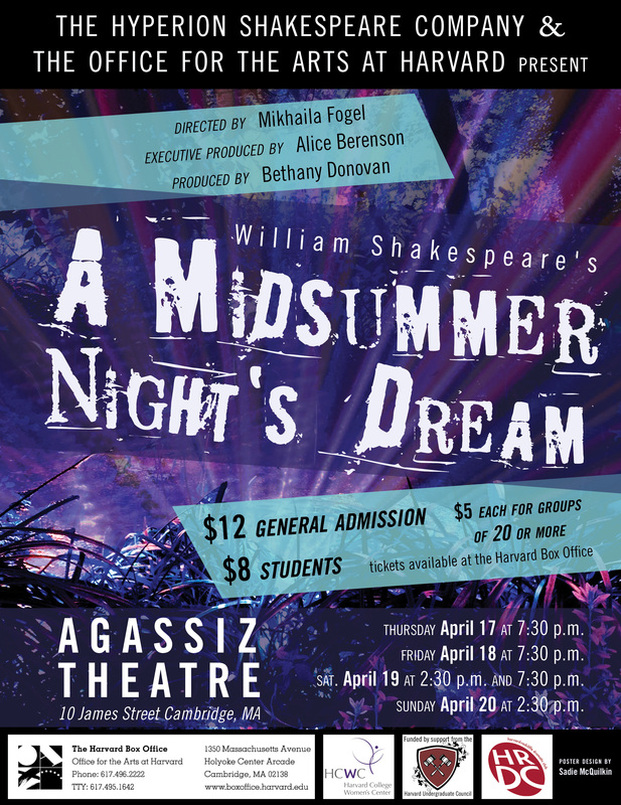 Harvard Ventures Into the Dream-Like Forest of CA?

Shakespeare’s A Midsummer Night’s Dream is a wonderfully accessible play, made for adaptations to different times and places with ease. The Hyperion Shakespeare Company and The Office for the Arts at Harvard presented their own adaptation of William Shakespeare’s A Midsummer Night’s Dream with some talent and some reckless abandon befitting the play’s mastery. The production struggles, however, under some awkward adaptation, stilted performances, and uninspired concepts.

The play follows four lovers, Lysander (Taylor Cressler) who is loved by Hermia (Kara Roberts) who is loved by Demetrius (Kevin Wittenberg) who is loved by Helena (Olivia Ball). Ordered by her mother, Egeus (Emily Zoffer), to marry Demetrius, Hermia defies custom and flees with Lysander into the forest to marry in a distant city some twenty leagues off; Helena and Demetrius learn of the lovers’ flight and follow them. Mayhem ensues. Deep within the forest, warring fairies (King) Oberon (Katherine Moon) and (Queen) Titania (Emilie Thompson) tear up the scene with their battle over a Changeling Boy. Oberon is aided by his faithful minion, Puck (also played by Emily Zoffer), and, together, they find a special flower that “makes a lover madly dote upon the next live creature that it sees.” The duo use this flower, first, to charm (accidentally) Lysander into loving Helena; then, to trick Titania into loving the ass-ish Bottom (Ari Brenner); and, finally, to make Demetrius also love Helena. The antics ensue when everyone loves Helena and no one loves Hermia. Four for you, Helena; you go, Helena. And none for you, Hermia. After much sexual and platonic antics between the lovers, Puck and Oberon make all right with the power of the special flower, sending the lovers back to Athens, two by two, properly coupled.

Meanwhile, a group of quirky actors rehearse a play for the Duke Theseus (also Katherine Moon, solidifying the parallels between the real and “fairy” world) and his new wife, Hippolyta (also Emilie Thompson). They are lead by Peter Quince (Lelaina Vogel), but their leading actor, Nick Bottom (Ari Brenner), controls the other actors with his bombastic style and leadership. Oberon orders Puck to turn Bottom into an ass (a donkey, not the anatomical part), and uses the special flower to deceive Titania into falling in love with the donkey-turned Bottom. This love humiliates Titania into returning the Changeling Boy to Oberon, which returns the status quo to the forest. The merry band of actors performs a play for the lovers and Theseus and Hippolyta: the hilarious and dramatic, tedious and short “Pyramus and Thisbe.” After the play, the lovers retire and the fairies return to bid farewell at daylight, remembered only as a “mere dream.”

Whew. Shakespeare wrote a convoluted and silly comedy, which college troupes and community theatres readily adapt with glee. Here, Mikhaila Fogel attempts to transpose this four-hundred-plus year-old play into the year 1999 and to Southern California. And that’s where they lost me. Despite an articulate Director’s Note, the production flounders with no clear artistic vision for why 1999 (except that it’s nostalgic like a dream) and why Southern California (except that it makes for better pop cultural references and a few stray accents). The rave forest scenes make for delightfully funny comedy and theatre (seriously, watch Harvard students try to get “jiggy with it”), but they don’t provide the theatrical sensibility or further understanding of the play’s themes. Just because a production can be set in a certain time or place, does not mean that the production should be set then and there (see: Shakespeare on Mars). The effort is commendable; the execution is groanable.

And amidst the muddy production concept emerges some fine Shakespeare performances. Moon shines as Oberon and Theseus, a rare treat for cross-gendering Shakespeare without any socio-political commentary on gender; instead, Moon is an actress giving an especially strong performance as the angry fairy of the forest who has been slighted by a past lover. Thompson matches Moon in many aspects, though Hippolyta is a weaker character, and her Titania comes off as silly in some aspects of the production. Brenner’s Bottom is also a treat to watch; he delights in his playful antics and buffoonery, which I wish were matched by the rest of the student-actor troupe, most notably Lelaina Vogel’s Peter Quince. Olivia Ball’s Helena is the strongest of the lovers, but she is unmatched by Kara Robert’s Hermia, and especially by Taylor Cressler’s Lysander and Kevin Wittenberg’s Demetrius, thus leaving the lovers almost a stagnant force to watch, despite the wonderful antics provided by Shakespeare.

But none of the performances disappointed as much as Emily Zoffer’s Puck. Perhaps I did not understand Zoffer and Fogel’s interpretation of the sprite and hobgoblin; however, the overalls and the menacing portrayal created a character that did not seem to fit in Southern California or the other characters’ world. Puck could be otherworldly, but the character needs to have some relationship and consistency with the other fairy characters. Also, Zoffer’s Puck seemed to embody more of the magical qualities of fairies (crouched stance, sprite-like energy) which none of the other fairy characters used in their performances. Is Puck superhuman, unlike Peaseblossom, and therefore more worthy of our attention? Was Zoffer befuddled by the history of famous performances for this iconic character? With dense volumes of literature and scholarly argument to point to multiple interpretations, I plead artistic license and say that her performance of Puck did not appeal to me, and I move on.

Aaron Graham-Horowitz’s lighting design provides a highlight for the performance, especially in the rave scenes, though it never seems to match with the confusing scenic design by Eloise Wheeler. Juliet Snyder and Gina Hackett costume the production with some knowledge of the time period, but it still feels like current high schoolers trying to resurrect the 1980s; the cast and production crew were likely in kindergarten and first grade when they imagine these teenage and young adult characters raving through the fictitious forest of Southern California. Believability seems to be buried with Shakespeare.

The Hyperion Shakespeare Company’s A Midsummer Night’s Dream is an enjoyable evening of college theatre. Most of the actors could recite Shakespeare in a straight line and the director and production team created an interesting concept design to keep the average college theatre patron entertained for the short Shakespearean comedy’s duration. However, on closer inspection, the production is muddied with confusing concepts and lacking performances.