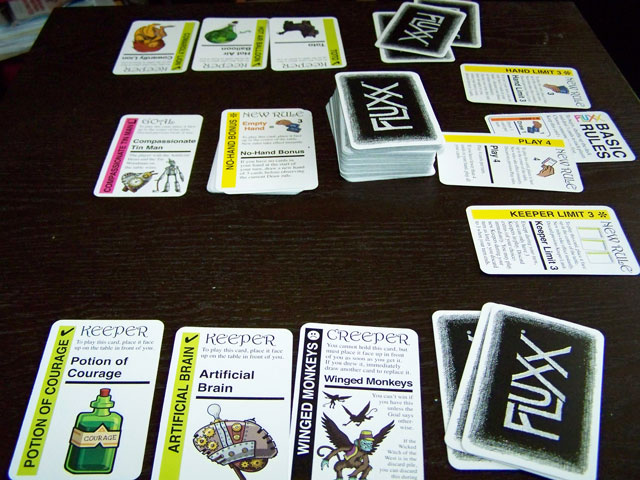 Fluxx is like your favorite collared shirt.  It’s a comfortable but enjoyable card game that allows you to multi-task, whether that means catching up with friends, playing a round while babysitting, or passing the time in the airport.  It’s the kind of game that doesn’t require much thought because it’s such a good fit.  Fluxx is a game on the go, a quick set-up and an easy play for the whole family to enjoy.  Moreover, like your favorite collared shirt, you can pick it up in an assortment of varieties.  Looney Labs features multiple editions of Fluxx, which vary the play but not the game’s basic structure.  My partner and I opted for the Wizard of Oz edition though we’re actively searching for a new edition to supplement our collection and obsession.  To become obsessed with Fluxx, you need only be comfortable with change!

Change is the name of the game in Fluxx; few things stay the same as you race to accomplish the designated Goal.  The Goal, like the Rules, can change throughout the game, even during the same player’s turn.  The Basic Rule is that you Draw 1 card, and you Play 1 card during your turn.  But some cards create New Rules, other cards take Action, while other cards designate new Goals.  The game is crated for 2-5 players to take turns following either the Basic Rules, or the New Rules in play (for example, the New Rules could require players to Play 3, instead of the Basic Rule’s Play 1.  The way to win is play Keepers that match with the Goal in play, but Creepers could prevent you from winning with even the right Keepers on the table!

Oz edition focuses your Goals and Actions on the beloved storybook-turned-movie’s Wizard of Oz characters and plotline.  For example, in the dreaded “It’s a Cyclone” Action, all of the Keepers and Creepers in play are swept together, reshuffled, and divided among all players.  Some Keepers include Toto, the famous pooch; the Tinman’s Heart; and eponymous Wizard of Oz.  The Creepers, however, are The Wicked Witch of the East (and West); The Flying Monkeys; and The Fighting Trees.  One humorous discovery is Fluxx’s clever way of avoiding trademark violation—something that only a lawyer seems to appreciate.  For instance, the famous line “Pay no attention to that man behind the curtain” becomes “Disregard the man behind the curtain.”  Fluxx chooses (for copyright reasons) to base this game edition on the famous book, not the iconic movie.  You’ll notice that the Ruby Slippers don’t appear as a card, but instead the Magic Shoes slip in as an homage to the original book’s Silver Shoes.

Regardless of which edition you choose to play, Fluxx is a delightfully simple game for ages 8 to Adult, which makes it a Must Have for family vacations, but also a good find for any couple who enjoys to travel and gets bored with regular card games.  Unlike Rummy or Go Fish, Fluxx promises that no two games are ever the same; the rules are always different, even in play!  More advanced board games may scoff as Fluxx’s silliness; it requires very little overt strategizing, and instead relies on luck of the draw.  Other players may resent how fast Fluxx can be won; a game may last as little as five minutes (I played a round that was won in as short as three turns), and last up to roughly 30 minutes.

However, the short duration is part of Fluxx’s fun.  With little set-up, easy Basic Rules, and ever-changing gameplay, Fluxx is a game to play when you want some fun competition with relatively little time or skill commitment.  I think that my next Fluxx purchase will be the Cartoon Network™ Fluxx (though I maybe disappointed by their attempt to avoid trademark infringement) or Zombie Fluxx (because who doesn’t like escaping from zombies?).  With never the same game twice, who wouldn’t want to Fluxx?