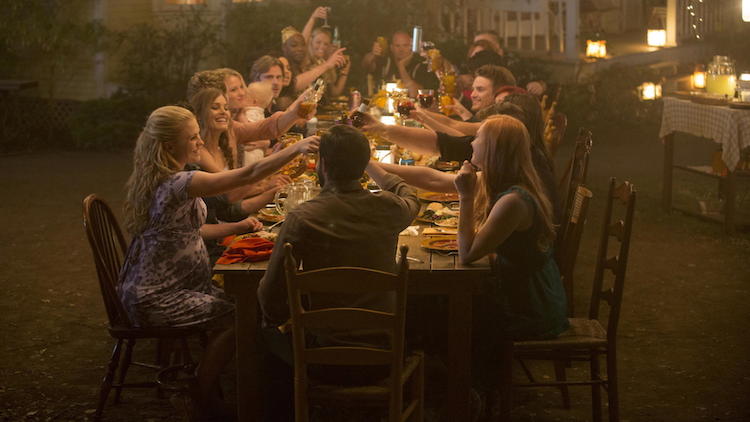 True Blood Finale: Was this the Ultimate True Death?

Over seven seasons True Blood has had some ups, and lots of downs.  After the show’s second season, the series seemed to over stuff the cast with people who were killed off in meaningless methods, rather than focusing on the development of the central characters.  Who remembers the Sam and his family of shifting dog fighters, or Terry Bellflour fighting the ghost monster from Lost?

Hoyt and Jessica Walk Down the Aisle

One of the central aspects to the last episode was the wedding between Hoyt and Jessica.  This was a nice wedding ceremony, and I have loved that Hoyt returned to the show, but the show tried to tackle too much in its last season.  Randomly bringing Hoyt back and having him marrying Jessica not two episodes later seemed rushed even for this show.  With that said the show went back to the basics, the core characters for the final episode, which made it better than I expected.

From the beginning the show wanted to focus on the love between Sookie and Bill, and many thought they were the endgame.  To give this show credit, it was smarter than a simple true love wins out concept.  If you watched the show smartly throughout the season you could glean that Bill’s flashbacks were building to his death.  Bill’s humanity and Sookie’s future were the most important things to him.  In the end it was Sookie who took his life, and that was well done; she also did not give up her powers to kill him, which was also smart for the producers/writers.

While Eric and Pam were not in the episode much, there flash forward was my favorite part of the show, and these two were what made this show great.  They were marketing “New Blood” draining Sarah Newlin for life to prevent Hep-V, a fitting end for her character.

Everyone else was coming together for a nice Thanksgiving dinner, and there was a pregnant Sookie with a new faceless man.  Fans were angry by this, but I thought this made sense, no man will be Bill for her, or fans, so why give him substance or depth.

While I agree with many fans the finale was flawed, schedules prevented from Nelsan Ellis from being a larger part of the show, same Alexander Skarsgard, which hindered the episode.  I went expecting minimal things, but these lowered expectations helped elevate my opinion of the finale, and while it was not the worst I have ever seen it was still better than I expected.

Over the years True Blood did a great job using vampires, and their other mythological to represent the “other.”  I think while the shows quality was usually on the skids the show’s creative can be proud that they did a great job pushing the envelope on all levels especially with sexual orientation.  The journey was rough, but the messages were often worth the experiences.