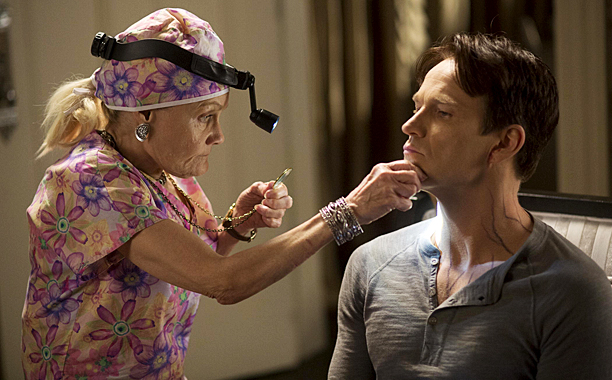 True Blood: May Be the Last Time, or Not

I will try not to be a bitter fan, but this show is ending on such a mediocre note, and making Dexter’s final season look like Shakespeare, and that is saying a lot.  I guess I did not let go of my bitterness especially since my first sentence about this past Sunday’s episode was riddled with disdain.

I Guess Sookie moved on quickly…

Not long after the death of her beau Alcide, Sookie runs to Bill’s side and there is of course some hardcore sex.  I guess Bill and Sookie are the end game.  I always tried to defend this show for moving past this Twilight like romance, and while this show certainly explores humans on a much deeper level than Stephanie Meyer, I can’t help but feel like bringing these two back together is a cop out.  I personally think based on the flashbacks of Bill’s life it would make more sense for him to die, but maybe that’s just me.  I always felt as though Bill never took to the vampire mentality, and these flashbacks are a testament to the man out of time in the present day material.

Sarah or Numi, or whatever the hell she wants to call herself escapes the Yakuza and Eric and Pam.  They go back to Amber, Sarah’s sister, and try to torture the location out of her.  Eric gets a little trigger or stake happy, and it’s bye-bye Amber.  Glad they used Amber and Sarah as plot points for this potentially successful metaphor with Hep-V.

I love Anna Camp, and in year’s past I have been excited to see what role Sarah plays in this show, but at this point she is played out, even her off kilter hilarious visions of her exes was not enough to save this sequence.

Eric agreed to continue hunting Sarah, and to be the “vampire spokesperson” which is an interesting turn for his character.

The Return of Hoyt

I think the highlight for me in this episode was Hoyt’s return to Bon Temps.  His mind was erased of Jason, but seeing Jason and Bubba together again as they worked through taking care of things with Mrs. Fortenberry was a nice touch.  Jason being a hound dog (with his eyes) for his girlfriend was also pretty funny, especially with Arlene putting him in his place.

Can Arlene be the star?

Carrie Preston is a true talent, and he vampire sex dream with Keith on the pool table was hot, glad I had my AC turned up on full blast.   Keith showed up in person, but Arlene kept him at arms distance stating she was Hep-V positive.  Keith then said “let’s just dance.”  An excellent moment.

The shows supporting cast or non-leads have always been the most interesting, and an episode without Lafayette was hard, but I still survived.  The show has 3 episodes left, but all the excitement was front ended, let’s hope there is more to come.