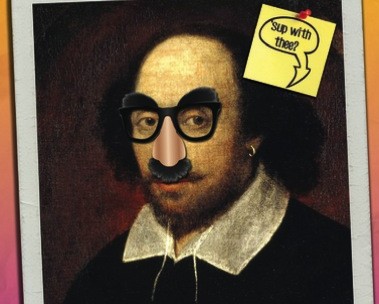 Much Ado about a Midsummer that Ends Well

Hub Theatre features an impressive ensemble of male actors to perform and excel in a laugh-out-loud, hold-your-sides, bring-your-Shakespeare-philes production of The Complete Works of William Shakespeare [Abridged] at Club Café. This production works in ways that their prior performances have not. First, the small cast is a tight ensemble unit featured fluidly throughout the evening in equal parts, and all actors are capable of shining on their own merits. The play also works in the intimate Boston Club Café’s Moonshine Room, providing small tables for food and drink, numerous seats (some audience members choosing to stand in order to fit for the sold-out performances), and just enough of a stage to showcase the performers’ work. Finally, the show’s light and cabaret-esque style is the kind of light (but artistically stimulating) fare to fill up Shakespeare novices and experts alike; it’s the production that you can bring your Red Sox-loving brother and bibliophile English teacher to with equal success.

Led by newcomer director Lauren Elias, The Complete Works of William Shakespeare [Abridged] clips at a steady and energetic pace. Ultimately, Elias’ stand-out work is in letting her expert male cast play to their strengths, with Elias cleaning and fine-tuning moments to good success. While some gimmicks played awkwardly (Romeo and Juliet felt like an uncomfortable reminder of past productions without clear direction), the majority of the production flowed seamlessly, landing on the jokes, including topical and cultural references, and emphasizing the humor in a contemporary reading of Shakespeare’s plays. The play opens with Brooks Reeves (the actors are all called by their first names in the production, much like the original, breaking down boundaries between a scripted production and an impromptu performance), giving a passionate curtain speech and explanation. He is matched in passion, though in more subtle tones by Patrick Curran, and newcomer William J. Moore plays the skeptic and bro-tastic addition. Elias does a great job coaxing truthful performances and orchestrating the roles and lines among the three actors to allow their personalities to shine. The extended RuPaul joke is one of the few notable slip-ups; it’s hard to imagine Reeves being that passionate or knowledgeable about the show, and it feels like a contrived reference to keep the performance timely and play to the “gay” character onstage.

Moore is strong as the female characters (a recurring joke for all), though his Juliet suffers from being more of a Rosalind, and his vomit joke wears thin without any escalation or surprise—instead of fooling the audience, the production seems to enjoy giving the audience more than knowledge to let them anticipate and join the fun, an apt directorial and production choice, though perhaps stifling on the dramatic element of it. But comedy is where this production firmly stands. Even while performing Titus Andronicus, one of Shakespeare’s most gruesome and bloody tragedies, the mood is kept light with a Julia Child-esque cooking show, for which Reeves excels as the title character with his arched dialogue and overly cheerful demeanor. The production was so humorous and enjoyable that I found it hard to take notes, opting instead of simply experience the rapping of Othello (Moore does a stand-out job in this scene), the Scottish play as a golf match (kudos to Curran for the accent), and the fumbling football game of the history plays and their kings.

Overall, the production relies on a lot of the word puns, playing to Elias’ strength in her knowledge of Shakespeare’s plays. The production lacked some of the inherent hysteria within the comedy, and some of the scenes between the Shakespeare plays felt like orchestrated improvisation rather than organic dialogue and interaction. The momentum was lost in these instances because the actors felt uncomfortable and disjointed, eager to throw themselves into one of the other skits. Indeed, the Intermission break caused one of the biggest hurdles for the production; after over sixty minutes and 36 plays, we are left with only Hamlet, and we retire for a commercial break, a smoke outside, and a delicious mixed drink (kudos to Club Café and the production team for the topical specialty drinks). I almost didn’t want to stay 15 minutes for intermission to return for only 30 minutes; I would have chosen to lump everything into a single One Act production and called it a night, but for business reasons, I recognize the need for an intermission (plus, the show is written for this break—who knows why?).

The production excels in Club Café’s space, and Michael Clark Wonson’s lighting design surprises with its effectiveness in its transitions and efficient touches, with the rave lighting during Romeo and Juliet being stand-out among his many shining moments. A technical suggestion would be to include a note in the program if future productions choose or require strobe lighting; many people are sensitive to this kind of lighting, and the appropriate warning aids them in choosing whether and how to enjoy the performance. The costume design by Lee Viliesis and the prop design by Marc Ewart are both simple and highly efficient in quickly telling the story and establishing characters with limited interference or preparation.

Hub Theatre’s The Complete Works of William Shakespeare [Abridged] is a Pay-What-You-Can masterpiece. With the escalating cost of ticket prices, and the closing of valuable and lucrative venues, Hub Theatre emerges as a theatre with the innovation and resources to provide quality theatre to the Boston theatre patrons on a budget; the less that a company charges for a ticket, or the lower the barriers to entry, then the more that audience members feel able to spend on additional food and drink, enhancing the production’s overall ambiance. And this particular production has one of the best crowd participations and interactions that I have seen as a reviewer in quite some time. Whether because it was not in a stuffy theatre confined by the rules of proper audience etiquette or because the production loosened our metaphorical Puritanical corsets with its clever one-liners and physical comedy, the production succeeded in engaging audience members throughout the show and even during intermission (more than any single performance, I had people asking me questions, demanding to know for whom I wrote, and whether I was a Shakespeare fan—“Yes, I think that Shakespeare wrote Two Noble Kinsmen; My Entertainment World, an international entertainment site, as the Head of the Boston Branch; and yes, I suppose that I like Shakespeare fine”). For this experience, I am thankful; I am eager for future Hub productions to build on this momentum and theatrical style, and I hope other companies mimic their success. It’s hard not to be completely in love with Hub Theatre Company of Boston’s The Complete Works of William Shakespeare [Abridged], and I wish that more performances could wow Boston audiences with the power of interactive and unpretentious theatre about Shakespeare; Shakespeare himself would have rolled around in his grave, if only because of his shaking laughter.