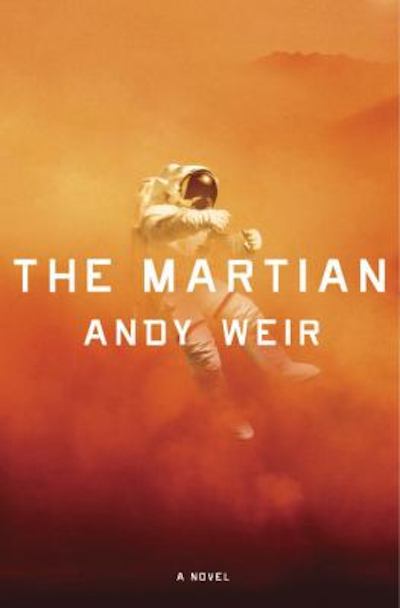 The Martian by Andy Weir

The Martian is the kind of novel that begs to be made into a movie. So it’s no surprise that the rights have reportedly been purchased. Generally, I tend to be the type who prefers to read a book before seeing the movie/television version (I’m currently reading the tome that is Under the Dome because I wanted to give Stephen King a try, but REALLY because I eventually want to watch the show). I will say though, The Martian is probably a book I could have skipped and waited for the theatrical version. This isn’t to say that Andy Weir’s novel isn’t good, because it is, but rather that it’s the kind of story that might play better as a movie.

Let’s set the scene. Our protagonist, Mark Watney, is on a mission to Mars when a dust storm strikes. Mark is injured and assumed to be dead so his crew leaves him on Mars. He awakes from his injury and spends the rest of the novel trying to survive. Sound familiar? It should. Basically The Martian is Gravity but instead of a heroic, somewhat timid Sandra Bullock we get a heroic, goofball (borderline asshole?) Mark Watney. The other major distinction, and what I think makes the novel interesting, is we do get to see the NASA team back on Earth trying to save Mark.

The NASA team is both what makes this novel have promise but ultimately what ruined it for me. Weir doesn’t go into nearly enough depth with these characters. He shows us a pretty decent glimpse into the minds and characters of the remaining astronauts in Mark’s mission, but we never really get to know the team back on Earth. And quite frankly, I was more interested in them than any of the other characters. But this is why The Martian should succeed as a film. A talented director (Ridley Scott is rumored) and talented screenwriter could really help to bring these characters to life. Mark Watney is clearly the star of Weir’s novel but he isn’t someone I’d be friends with in real life. He doesn’t really have flaws so much as he’s just kind of pompous and reminds me of a middle-aged frat boy. His character certainly brought humor to the book, but didn’t really add much depth.

So while I would recommend The Martian as a good and fast beach read, it’s nothing to write home about. Maybe just wait a few years and give the movie a gander.