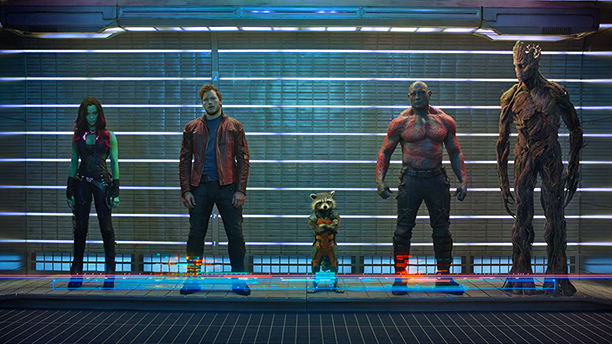 Hooked on a Feeling

One of the major pluses to Marvel building a complicated, interconnected multiverse (that also happens to be the most profitable thing around right now that’s not called Frozen) is that they can take insane, stupid risks. Like a rogueish space captain who’s not afraid to play with his own safety, they’re free to jump headfirst out of an escape pod on a whim to save his favorite green-skinned lady. Marvel is free to dive head first into a science fiction world filled with talking raccoons, complicated Gods and mythology, and a goofy, sentimental sense of humor.

And God do I love it.

Not to make it sound too risky. Tree Man Groot looks ready to sell action figures to young boys and adorable plush stuffed animals to the little ladies. Rocket Raccoon comes from the Disney school of adorable rogueish side kicks. And loveably goofy Chris Pratt is poised to become the best thing to happen to action movies since sliced bread.

But the best thing about building a cinematic multiverse, the likes of which the silver screen has never known is that it makes the movies more like a comic book. Things are complicated, even when they’re straight forward, and there’s depth and intrigue lurking behind things for the fans who want to go there. But they also take away the alienation factor that can be so prevalent in comic books, where competing mythologies, different takes on the same characters, and thousands of issues worth of history seem like a pretty steep price of admission.

All of which brings me to the geeky, joyful, clever, and wonderful Guardians of the Galaxy; a funny, relaxed and supremely confident adventure. Director and Co-writer James Gunn glides past some of the sci-fi tomfoolery, but he’s clearly enamored of it, just as much as he is of the scripts omni-present one liners. We’ve seen when a movie gets eaten up by its own Galaxy-wide mythos (Cough Green Lantern Cough), but Guardians manages to invest in the reality of its situation while still carrying more about its story and characters.

It follows the exploits of Chris Pratt’s Peter Quill (aka Starlord) as he chases down a mythical Macguffin with the help of the angry Gomorra (Zoe Saldanna), vengeful Drax (Dave Bautista), and bounty hunters Rocket Raccoon (Bradley Cooper) and Groot (Vin Diesel). There are shenanigans with Ronan, a bad guy strictly in the Thor’s Evil Elf mode – meaning he’s all growl and no substance. There’s also a paternity mystery, sibling rivalry (between Gomorra and the far more interesting baddie, Nebula), and a healthy dose of 80s pop hits thanks to Quill’s deceased mother.

It all buoys along, light and fun, with a nice sense of character and an incredibly solid grasp of pacing. The action is remarkably adept, and the film overall is probably the most visually interesting Marvel Universe film outside of Avengers. In fact, in many ways, this is the most wholly satisfying output from the MCU besides that tentpole film.

I feel like I am supposed to be getting bored with this kind of film by now, to get inured to the one liners and action sequences. But each entry, even the failures, feels unique and fun and like a great new episode in a television series I’m still really excited to keep watching. I laugh, I gasp, I leave energized and optimistic. So as long as Marvel keeps giving me awesome movies to geek out on, considered my cynical side quieted. In fact, one might say I’m hooked on the feeling these movies keep giving me*.

* okay yeah that was bad.