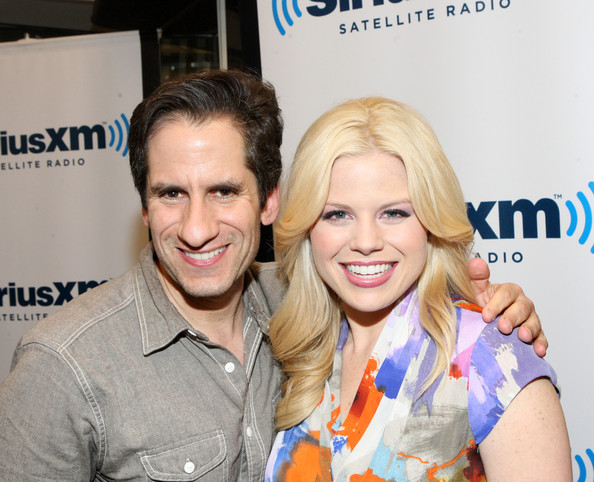 This Gentleman Prefers His Blonde in Provincetown

I am still in awe that I sat so close and watched relished the astonishing Megan Hilty in Provincetown.  My Entertainment World interviewed her this past Winter, but the joy of seeing this talented and enthralling actress and performer is much more captivating and, indeed, a Smash-hit.  Many of you may remember Hilty from the short-lived (and as one of the very few successes) in NBC’s Smash as actress Ivy Lynn, but Hilty excelled first as a young stand-by and replacement G(a)linda in Wicked on Broadway.  Now, eight months pregnant with a baby girl, Hilty serves a magical evening of some of her most popular songs.  To sweeten the deal, she pairs with entertainment commentator and expert song-interpreter Seth Rudetsky in The Art House for Broadway @ Concert Series to offer an intimate performance of her stories and songs in critical success.

Hilty opens with one of her biggest (and surprise hit) successes as Ivy Lynn in Smash, with the original song “They Keep Moving the Line.”  She brings an intimate appeal to the song, which is missing from the televised interpretation.  Her sultry eyes draw us in, before wow-ing us with her crescendo of emotions.  Afterwards, we’re treated to an explanation of Hilty’s favorite places in the gorgeous and iconic Provincetown; for those wondering, she appreciates restaurants Patio and Local (two restaurants that I tried for the first time on this trip—go to Patio for the excellent people-watching and drinks, and Local for the otherworldly burgers).  One of the more intimate details that Hilty shares with us was her “Babymoon” to Paris with pretty husband Brian Gallagher.  While in the City for Lovers, Hilty and hubby participate in the famous Love Lock on a Parisian bridge, but they create a clever twist by attaching a lock for their unborn daughter, offering her the opportunity to find and unlock this gift later in life (if the bridge is still standing).  She transitions into the heartfelt Cole Porter “I Love Paris” with the perfect amount of eye contact in the intimate venue.

Hilty, a trained opera singer with a history of attending opera summer camp, is able to transition easily to her legit soprano for Meredith Wilson’s The Music Man gorgeous and soaring “Goodnight, My Someone.”  Her phrasing and breath support are stunning, especially considering her ballooning pregnancy.  The lullaby is a perfect tribute to her unborn daughter, and you can imagine how lucky the little girl will be to have a mother who croons her to sleep with such a wistful soprano voice.  And as if Hilty couldn’t get more astonishing, she proves her comedic worth with her “Alto’s Lament,” a clever plea for the melody despite her brassy lower register.  Hilty is more than a singer that acts, proven by her degree from Carnegie Mellon’s impressive musical theatre program, and comic and heartfelt lyric interpretations in her songs.

Not all of her songs impress in the same way.  Her rendition of Judy Garland’s “The Man That Got Away” feels like it sits too far back in her throat, and “Popular” feels like a desperate attempt to re-imagine the song in a unique way without the help of Wicked’s context or the Elphaba/G(a)linda chemistry.  Luckily, she saves the latter song with a deliciously humorous story about her own antics on the Wicked stage as the enchanting witch, including an inopportunely-timed plié during a performance of “Popular.”  Nothing is ill-timed about her off-stage romance and marriage with pretty Gallagher; they have adorable chemistry during Little Shop of Horror’s iconic duet “Suddenly Seymour,” though Gallagher sounds very raspy and guttural with the song.

Rudetsky chimes in with just enough snark and quick-witted commentary to keep Hilty on her toes, despite her admission of being a “singer who moves well.”  Hilty is humble and articulate, though a bit safe in her artistic endeavors and explanations.  Fortunately, she brings her emotions and storytelling ability to the forefront in her performance of Smash’s original “Second Hand White Baby Grand.”  She practices pitch-perfect restraint; she is not broken or secondhand, and continues to make the pretty sound that made her a Smash success.

She finishes her cabaret performance by fielding questions.  Some take-aways: She’s a Bernadette Peters fan-girl (who isn’t?!); we may enjoy a Smash concert in New York for Summer 2015 (meh); her mother would love a “Smash-ed” web series (wouldn’t we all?); and she is still hopeful for Gentlemen Prefer Blondes revival (let’s see this before Lea Michele in Funny Girl).  And then we are treated to the song that made her an international televised star, Smash’s original “Let Me Be Your Star.”  And for extra measure, she performs an encore with 9 to 5’s titular song.  Hilty is definitely working for this fan; now, let’s see Hilty bring diamond-studded talent to Broadway again with her gorgeous Blonde.