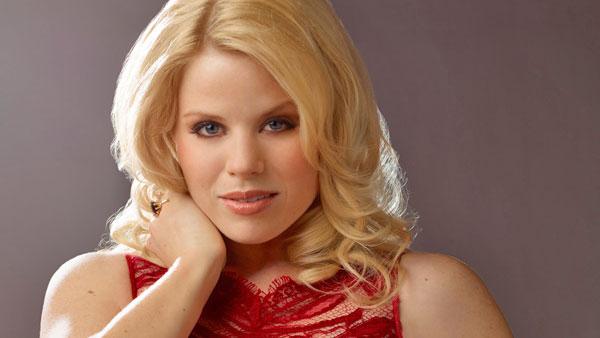 Broadway star Megan Hilty made her foray onto the small screen with NBC’s starry but tumultuous Broadway-themed drama Smash. The show had some serious ups and downs but ask anyone who watched and they’ll tell you that the big-voiced bombshell behind aspiring-Marilyn Ivy Lynn was the saviour of the show. Smash might be gone but it lasted long enough into 2013 for Megan to score a Best Supporting Actress nod for her role on the drama.

We got to talk to Megan about Smash, working with her idols, where she is now and the marquee-lit path she took there. (hint: Wicked, lots of Wicked).

Do you remember your first experience with theater?
Yeah. I mean, a little bit. I was really, really young and my aunts that came and stayed with us for the summers got us into a little youth theater and I played Bet in Oliver!. I had to kiss a boy, that’s all I remember [Laughs].

Is that when you knew you wanted to be a performer?
Yeah, I mean I always knew that I wanted to be a singer from a very, very, very early age. I was always obsessed with music, so much so that I thought I was going to be an opera singer. I started to train classically, and then, I don’t know, musical theater just kind of seemed to fit my personality a little bit better.

Have you always loved musical theater? What are some of your favorite shows?
My all-time favorite shows are Sweeney Todd and Into the Woods. I’m a big Sondheim nerd.

Why Sondheim?
Because it’s complex, and specifically, I think Sweeney Todd is the perfect musical. If you follow the score, it is a perfect radio play. You get all of the emotion from all the orchestration, all of the words, everything. I just think it’s written perfectly.

Would you consider yourself mostly an actress or a singer now?
Hopefully both [Laughs]. I don’t know. I try to keep a good balance of the two. While I’m doing Sean Saves the World, I still go out on weekends and do concerts. My own concerts and symphony work on weekends, so I try to keep it balanced.

Who are some of the performers who have always inspired you?
I’ve always wanted to have Bernadette Peters’ career, or Audra McDonald. Kristen Chenoweth and Idina Menzel have been rocking it too. So, yeah, I’ve always looked up to them.

So what was it like then to have Bernadette play your mom?
It was so silly. When they said that she was going to be on the show, not only be on the show, but play my mom, I thought I was going to die. She’s the loveliest women, and I’m so lucky to have so many intimate moments with her and to sing with her? That’s crazy. Working with Bernadette Peters was a dream come true quite literally. I was pinching myself every day.

You mentioned Kristen Chenoweth and Idina Menzel. Wicked was one of your first big parts on Broadway, right? What was that experience like?
Well, I actually made my Broadway debut opposite Idina Menzel shortly after she won a Tony for it, because I was the standby right after Kristen left, and so my Broadway debut was with Idina, who was incredible. She was so awesome and so nice. You think that somebody like that would have an attitude or something [Laughs]. She just won a Tony and like, you’re Idina Menzel and I’m just a little standby, you know? But she was so cool and she just wanted to make it our own whenever we were on stage.

And do you have a favorite Wicked memory?
Oh my gosh. I was in that show for about 4 ½ years, so there isn’t one that sticks out. I feel like I grew up with that show; I went into it right out of college. To say that one moment that was more special than the next, it would be really hard to do.

Did you start out in the ensemble?
No, I started out as a standby, which is different. An understudy is in the ensemble, and then they also cover the lead. But a standby is the first to go on if anything should happen, and our only job is to hang out in our dressing room or in the wings in case something goes wrong [Laughs].

You also originated the Dolly Parton role in 9 to 5 when it went to Broadway. How did you go about finding that balance between imitating Dolly, who is so iconic, and creating a new interpretation?
I think Wicked kind of prepared me for that too. You know, because I was following in Kristen Chenoweth’s footsteps and Jennifer Laura Thompson who I stood by for, who is a comedic genius, and I had to figure out really early on not to imitate them, but I still had to give that flavor. So, I think that’s something that actually came from that job because in Wicked, everybody, the whole audience comes with a certain level of expectation, you have to hit these certain places, but you can’t be like a robot and just do what the other person did exactly, because then it’s not honest.

How did the role on Smash come about?
I was up in LA, it was pilot season, and I auditioned like everybody else. I almost turned the audition down, because I saw in the character description for Ivy Lynn that she was an incredible dancer, which I am not. So I just wanted to skip the embarrassing dance calls and stuff like that, but luckily my manager is a lot smarter than I am, and she said just go put yourself on tape, and we’ll see what happens. And then the rest is history.

Having lived through the process of getting a new musical to Broadway, did you find that Smash was at least somewhat faithful to that experience?
Oh yeah, I mean a lot of that show was based in truth. I mean, it wasn’t a reality show so they had to heighten some of it to make it interesting to watch, but yeah, it takes a really long time for things to get to Broadway and there’s so many changes along the way during readings and workshops and out of town and stuff like that. And there’s a lot of drama that goes along with it. You’ve got a lot of really big personalities- you have to have a big personality to be in the theater- and sometimes they collide and crash and burn. So it’s not too far off the mark.

In what ways are you and Ivy similar and different?
I’m similar to her in my ambitions, certainly. I also know what it feels like to feel stuck in your job and feel like nobody can see your full potential. I think that’s kind of a universal feeling. But where we differ is how far we’re willing to go to achieve what we want [Laughs].

The show went through a lot of really big changes between season 1 and season 2. Was that something you felt as an actress? How did you respond to some of those changes story-wise?
Well, I was really excited for the changes in my character, because I knew they were trying to round her out a little bit, show the humanity and show a different side of Ivy Lynn, so I was excited about that. You know, change is inevitable. Unfortunately, in our business, people come and go all the time, myself included. It was unfortunate to lose a lot of really good friends from season 1 to season 2, but I made a lot of new ones in the next season too.

I wanted to ask you about the music on the show. Did you have a favorite song?
There were three I guess that were my favorite. ’Let’s be Bad’ was the most fun to shoot. And, ‘Moving the Line’ was the most fun to sing. And, ‘Second Hand White Baby Grand’ is just one of the most beautiful songs I’ve ever heard, so it just felt really lucky to get to do that.

How are you enjoying working on sitcoms (NBC’s Sean Saves the World) now as opposed to the one hour drama? Do you have any plans to return to the stage?
It’s so much fun. I really love doing something completely different from Smash. I don’t want to get pigeonholed as the girl who sings. I mean, everybody’s always like ‘when are you going to sing on the show?’, and I’m like ‘that’s the point, to not sing for a minute’. I don’t always want to be the person who [Laughs] launches into a song, so it’s great to do something new. And the schedule’s awesome too.