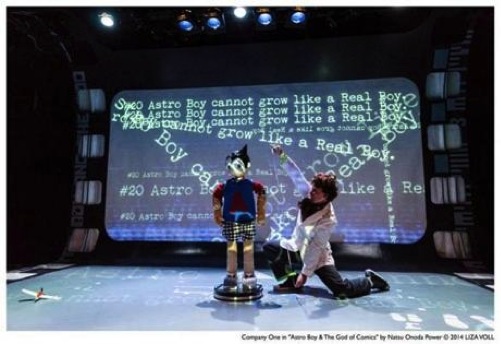 I’m a fan of weird shit. Honestly. I love when artists can take the strangest, quirkiest little spaces, mount engaging, innovative, and bizarre work, and somehow connect with their audience through their own unique voice. Astro Boy and the God of Comics at Company One was (almost) everything that I wanted it to be and more all wrapped up into a tight little 80 minute package.

A product of C1’s XX Play Lab, a program that “propels the work of female playwrights” through a partnership with Boston Center for the Arts, Astro Boy went through a yearlong development process and was the brainchild of Natsu Onoda Power.  Power’s fast-paced performance focuses on Osamu Tezuka, one of the fathers of Japanese animation, and his most recognizable character, Astro Boy. Through a sequence of ensemble vignettes told in reverse chronological order, Power explores the relationships between art, science, and family as she uses Tezuka’s own creations to weave a beautiful tapestry.

It’s a hard piece to review, honestly, because it is unlike anything else that you will see in Boston this season. The structure and content alone are unique in their own right, but the presentation and execution is simply breathtaking. Power employs the use of projections brilliantly crafted by Jared Mezzocchi to transport the audience into the world of Japanese animation, making us feel like we are not only part of the story, but living in it as it is happening.  As if this weren’t enough, the projections are interactive, dancing and moving with the actors as they perform alongside these powerful and playful images.

One of the most incredible moments of the play comes almost halfway through, as a car crash sequence ends with Astro Boy lying on the ground, a pool of blood forming around his (her) head and trickling away from the scene of the accident. Simple. Quiet. Powerful. Not to mention precise, which this entire show requires that the ensemble be from front to back. And they rise to the occasion.

Phil Berman, Jessica Chance, Gianella Flores, Amanda Ruggerio, Jeff Song, Robert St. Laurence, Kaitee Tredway and Clark Young do an impeccable job of keeping up with the rigid pace and structure set out by Power. Some manage to capture the essence of the comic book style more than others; most notable are St. Laurence, who delivers a stellar performance, and Young, who powerfully captures the mind of the artist that was Tezuka. Despite some, shall we say, softer performances, this group manages to impress with the double, triple, and quadruple duties they are assigned.

The ensemble not only performs the show; they also move the set, draw the backdrops live, function as props, and are asked to go through no less than a half a dozen or so different characters throughout what must have felt like a marathon of a performance. They are good on their own, but best and most impressive when they are working together as in an unspoken scene which would be silent except for the sounds that the group makes in quick succession replicating the motion of a car.

Yet no moment resonates more than when, in one of the latter sequences of the show, during a vignette on Tezuka during World War II, the cast begins drawing figures on the back wall. Nondescript at first, the forms and shapes they all trade off drawing together feverishly soon become recognizable as bodies ravaged by war. Slowly, a projection begins to appear which defines the shapes of the bodies and reveals them to be a silhouette of the explosion of the atomic bombing of Hiroshima, delivering one of the most resonant and powerful stage pictures audiences will find on a Boston stage this year.

Considering my affinity for Guerilla Opera’s Gallo, it’s no surprise that something like Astro Boy might strike a chord with me, and I may get a reputation for being that guy that likes weird shit. But thank God for that weird shit and thank God for companies like Company One for producing it.