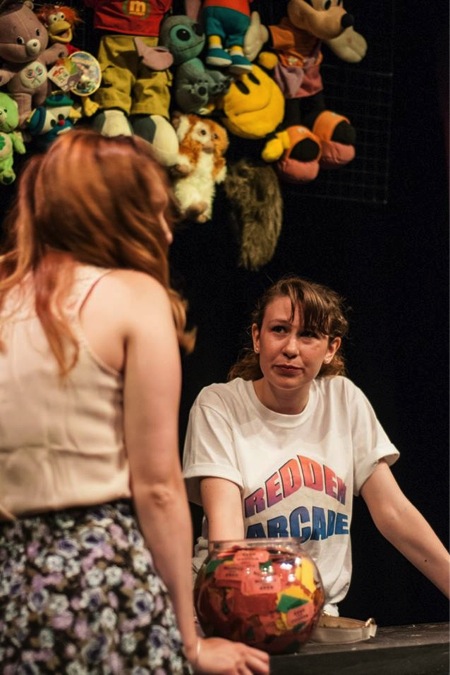 Entering the Factory Theatre’s space (possibly for the last time; RIP, Factory), I was greeted by the familiar bell-and-whistle tunes of an old-school arcade. We, the audience, sat around the thrust stage and faced the prize counter, with several toys hanging above it, a sign hanging in front of it spelling out “Welcome Home Lulu Belle,”and a very bored looking attendant standing behind it. Posters for classic games (“Galaga”; “Asteroids”; “Burgertime Deluxe”) adorned the brick walls. Yellow bulbs hung from the ceiling, providing dim light and an air of stillness.

From behind her counter, adorned with a fishbowl full of tickets, the bored attendant narrowed her eyes. She walked forward over to the edge of the space, to a gap between seats. She mimed elbowing an old arcade machine; a red light flashed on her face, as it would on the faces of all who consulted the mysterious, ancient fortune-teller machine to hear its crackling message (voiced by Mikey DiLoreto; great lighting design by Andrew Menard; sound design by James Peter Sotis). The attendant’s fortune is not a good one.

And so begins Fortune’s Favored, a new play by Lesley Anne Moreau, directed by Zach Winston. The attendant is Eudora Redden (Annie Hochheiser), the neglected/abused daughter of the arcade’s alcoholic owner, stuck in her hometown of Big Ugly, West Virginia. Unable to leave her post in her desire to financially support her mother and mentally-handicapped younger brother, Eudora has all but lost hope that another, brighter life is possible. But her stagnant existence soon experiences some turbulence. Her attractive, sugary-sweet cousin Luann (Lauren Robinson) returns from Washington, D.C. under questionable circumstances, with a sudden interest in the operation of the arcade. Soon after, a rich young man from Beverly Hills makes an appearance; Davis Milford (Conor Walsh) wants to purchase the antique fortune-teller machine, and seems interested in Eudora beyond a possible business transaction. Eudora uneasily attempts to navigate these waters, fraught as they are with deceit, uncertainty, betrayal, and finally heartbreak.

Moreau builds an increasingly compelling narrative, although it occasionally gets mired down with some plodding dialogue. The opening scene, for example, featuring Luann and Eudora “catching up,”takes a good long while to develop and flesh out these characters’intentions and interests. While I’m all for natural pauses and realistic conversational pace, I’m often wary of dragging dialogue, particularly in a three-person show.

Despite occasional dips in pace, I was drawn to Robinson and Hochheiser’s performances. Robinson drawled out Luann’s saccharine self-compliments to her heart’s delight, and it was a joy to see how much she could communicate with confident smiles, irritable pouts, dangerous smirks, and posturing struts. She made a good physical foil to the downtrodden, self-deprecating Eudora. A less-talented actress would have risked coming off as boring or uninteresting in comparison; Hochheiser was anything but. She perfectly captured Eudora’s unintentional humor (e.g.: “Just cos I’m from West Virginia doesn’t mean I’m a walking stereotype”), and whether she was expressing hope for the future or blinking back tears after another round of paternal battering, I found myself rooting for her eventual escape from Big Ugly.

Unfortunately, the talents of the two women were undercut by the third member of their team. Walsh delivered a flat Davis, stating all of his lines clearly, without the encumbrance of emotional inflection or natural hesitations or exclamations. While I was grateful that  the majority of the play centered on Eudora and Luann, this static love interest put a dent in the tragic developments of the plot.

I won’t spoil the ending, exciting in its execution if not altogether unexpected in its framing. This was the first Vagabond Theatre Group production I’ve seen since their founding show in 2009 (A Skull in Connemara, a fantastic production); Fortune’s Favored offers the promise of even greater artistic innovation for this young company.